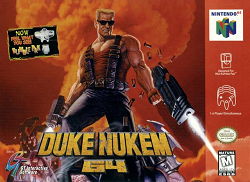 In this review, we make the alien scum pay in the game Duke Nukem 64. We find out if this port of the first person shooter is worth playing.

Duke Nukem 64 was released in 1997 and was a port from the original PC version, Duke Nukem 3D. This is the second port we’ve reviewed as we have already reviewed the Sega Mega Drive port only to find out it was spectacularly bad. So, we decided to see how well a more official console port played.

Since this game is largely similar to the original Duke Nukem 3D, we decided to simply review the differences.

The first noticeable difference is that the episode system was scrapped. Instead, all of the levels are now just one long chain of levels. While this sounds like a step back from the PC version, there is a huge advantage this different system has over the PC version. If you advance from one episode to the next, you actually keep all your items and ammo that you found in the last level of the previous episode. So, everything you have on hand after defeating the overlord will transfer over to the Raw Meat level. This gives the players a nice start on the next level. This does make a lot of sense because I found it annoying that you had to star off with only a pistol and a small handful of bullets on the Raw Meat episode simply because it’s a new episode. So, even though you can’t access different levels from the beginning (only the first), I would say this is actually a mild improvement.

The only downside to this game is the fact that this version largely only includes levels from the first three episodes. Contrary to what some say, the entire level of Duke Burger exists in this game (secret level accessed on the Gun Crazy level). Other levels found in episode four do exist in parts on the other levels. Parts of the Pig Sty level, for instance, exists in the Freeway level. Parts of Duke Burger also exists in the Guns Crazy level. Parts of Shopping Bag exists as a secret area in Hollywood Holocaust. While it isn’t everything found in the PC game, there are certainly nice tokens found in this game. This was definitely really neat to see. To add to this, there are several other small new areas found in this game. While not taken from the PC version, it was really cool to see several improvements done on the various levels. This includes two whole new areas in the Flood Zone level. Other levels got small reworkings of existing components that previously existed in the PC version. Another nice feature was the inclusion of small areas that allows you to see into other levels. While this does exist in the PC version, there are more areas that you can do this. For instance, Guns Crazy has an area where you can see into the Rabid Transit level. If you enter the Rabid Transit level, you’ll eventually see an area looking out over the Guns Crazy map. I thought this was a really nice touch to add to everything that has been added in the port.

Level expansion isn’t the only thing this port has to offer. There is also the expansion of the number of guns available. This includes the plasma cannon and grenade launcher. I found the plasma cannon
to be incredibly useful against the toughest enemies in this game. With few exceptions, two blasts at full charge can typically take care of enemies if you got a direct hit. To expand on the arsenal further, there is the expansion of including whole new ammo types. This includes dum dums for the pistol (much more powerful pistol bullets), explosive shotgun shells, and heat seeking missiles. The chain gun was swapped out for two SMG guns (which I thought were cool). The missile launcher has a whole new look to it (previously RPG) which I thought was neat. The only downside to this port is that the freezelauncher no longer exists. It’s the only weapon I can think of that has been removed though. Still, I thought the modifications were great to see.

In addition to this is a Duke Match which allows players to play against other players or computer opponents through all the different levels (with, of course, numerous added warp points). Players can adjust the rules as they see fit and can end the match by triggering the exit if they wish.

One area that received negative attention for this port was the use of censorship. Some areas were altered to be more rated PG (namely the removal of a strip club where it was replaced by a shipping dock. There was also a porn store that was replaced with a gun shop as well. While some didn’t like to see the changes, these changes really didn’t bother me a whole lot. In fact, I thought it was interesting to see some of these changes because it gave players a slightly different gaming experience. So, yes, it’s censorship, but what came out in this game wasn’t all that bad at all in my opinion.

So, really, I would say gameplay was greatly improved on this version. While there are a few small downsides to this, my overall impression was that this was a pretty big improvement.

Graphics was one area that this port was heavily criticized over. While I can agree that things do get a little dark at times and that some of the textures weren’t the greatest, there are areas this port improved on. The explosions are now actually 3D effects instead of 2D sprites. This was definitely an improvement and something not a whole lot of games have tried. The explosions also include 3D dust clouds which were also really neat to see. Another major improvement was the night vision goggles. In the original PC version, it only gave everything a slight green hue and highlighted enemies. In this version, it brightened absolutely everything up. This actually improved the usefulness of this item in my view. A lot of textures were altered, again, thanks to censorship. For instance, the screen in Hollywood Holocaust is now simply showing an Independence Day-like animation instead of a stripper. Again, some people disapproved of things like that, but I didn’t mind that. The only real downsides in the graphics were the not so great textures and the darkened areas found in this game.

A downfall of this port was, however, the audio. The intro of this game is probably my favorite version of Grabbag I’ve heard. I was excited to hear what the rest of the game had in store, but unfortunately, this is the only track in the entire game. Every level simply features no music whatsoever. If you beat the game, you get treated to the theme song again. This does make play a little more stale, but it wasn’t a terrible audio experience. This is because this game does feature a lot of sound effects and one-liners from Duke. There’s the weapons fire, the running water, the helicopter flyby, the enemy sounds, and plenty of other things to find. So, in spite of an almost complete lack of music after the intro, I would still say the audio in this game is pretty good.

Overall, there are areas in his game that are inferior to the PC version, yet there are areas in which this port is superior in. This game features new areas to explore, partial levels latched onto the current set of levels, an ability to bring everything with you from episode to episode, new weapons, and new ammo. The graphic did have some major pitfalls, but in the midst of the textures, there were improvements like the night vision goggles and some of the special effects. The audio may have had some misses, but it also had some hits as well (namely the theme song). So, I can’t say the experience is a whole lot worse than the original PC version. This is good because this is definitely an enjoyable game.

Overall
Furthest point in game: Various. Beat the game on Piece of Cake and beat a number of levels on all the other levels including Damn I’m Good.