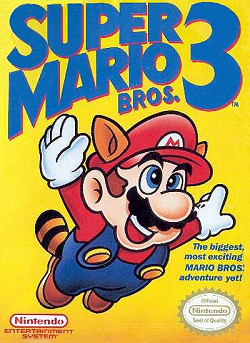 We return to the Super Mario series by trying out the third instalment on the original NES. This version features some updated graphics and a few new features and follows along with it’s side-scrolling adventure roots. We look at whether or not this was an improvement for the series.

This particular iteration of the Super Mario Bros series was released in 1990 and, for some, would ultimately be one of the greatest video games ever created. It follows along with the standard storyline of Bowser kidnapping Princess Toadstool, but Toadstool isn’t kidnapped until completion of World 7. Many of the basic features follows along with the original Super Mario Bros game, but there were many new features added.

The player starts play in a world map. This world map, to my knowledge, was a first in the series. It broke away from the #-# system (where the first number indicated the world the player was on and the second number would indicate the level). I thought this new system was a nice evolution of the game and worked very well because squares could be added that wasn’t necessarily a standard level, but instead, was opportunities to gain lives and items.

Some of these spaces were depicted by a spade. These squares basically allowed the player to play a simplified version of slots in an effort to get free lives. If the player lined up the images correctly, players can be awarded multiple free lives. The mushroom house typically involves three treasure chests. Players could only select one chest and whatever the item was inside, that item was for the players to keep for later use.

That leads us to another great feature that was added. Players also have an inventory to store items in. This inventory can only be accessed on the world map. If a player uses an item in the inventory, that player can be transformed to whatever benefits that item offers and can enter a world in that form. for instance, if a star is used, players can start the level with the effects of temporary invulnerability. (stars, I should point out, seem to be the only way you can defeat leaping fireballs ghosts and whomps).

There is more than one type of level that is featured on the map. The normal levels show a number to indicate which level it is. Then, there are the castle levels. These levels generally have a unique appearance (much like the first Super Mario Bros game) and feature a boss at the end. Defeating that boss (usually a brown koopa-like character with a spikey shell) will allow the player to obtain a question mark sphere. Obtaining this item will usually cause lock spaces to disappear – clearing the way for the player to use a particular path. Sometimes, it will create a bridge that connects different land forms.

Each world (with the exception of the final world) also features a white castle. These levels always involve a king that has been transformed. The only way to transform the king back to his normal self is to obtain a magic wand. These wands appear on flying ships which the player runs up to after greeting the toadstool helper who explains what happens. The air ships the player traverses is always an auto-scrolling level and features log textures, numerous cannons, flame throwers and baddies that throw, what I think are, wrenches at you. At the end, you fight a unique Bowser child who have different ways of attacking you. Once you defeat this boss, you can collect the wand. At that point, the ship vanishes and the player takes the longest falls Mario ever takes without taking any damage or dying I’ve ever seen in the Mario series. Under most circumstances, the king thanks you for retrieving the wand, but if you retrieve the wand in a Raccoon suit, the king will ask you “Raccoon” for your name. If you retrieve the wand in a frog suit, the king will offer to transform you back to your original self as well (doesn’t happen). In any event, you’ll receive a letter from Peach, rewarding you with a special item and a hint on how to go through the next world successfully.

There are other special levels in this game as well as seen on the world map. There is the quicksand level in World 2. There is the chomp levels of world 7 (which ends with a treasure chest as opposed to the usual random card giving box). There are ship levels (both air and sea) on the final world. There are the particularly unique Hammer bros level which are depicted by a walking Hammer bro that moves after beating each level. Hammer bro levels can be a great source for obtaining hammers that can be used to bust down rocks that block your path. Finally, there are elusive coin ship/treasure ship levels which features numerous coins. The player has to beat a level in a very specific way to summon these coin ships, though, so it can be very tricky to get them.

The levels themselves have many returning features. There are question mark boxes which players can simply hit from the bottom to obtain whatever is inside. Most of the time, these are coins, but sometimes, they are items and free lives. There are pipes, some of which the player can travel down, that infrequently dot the land. There are goomba’s and, uniquely, flying goombas. Red flying goombas can jump and take more than one successful stomping to defeat. Yellow flying goombas actually fly for extended periods of time and drop miniature goombas on the player. If a miniature goomba lands on Mario, Mario’s jumping and running abilities are limited until he can shake them off. There are standard plants and plants that spit fire. There are the usual coins to collect (and the usual “collect one hundred coins, get a free life” system). Another returning feature is the time limit. In addition, players can find vines that allow them to gain access to elevated areas. A new item in this game is the leaf which enables Mario to grow a raccoon tail and fly after running a certain distance. Another new feature is the musical notes. Some note boxes have items in them, but most just allow the player to spring up higher than normal while jumping (a bit like a trampoline, really). If the player is lucky, they’ll find a pink musical note box. Springing up on it will allow the player to enter a special cloud level. At the end of each level, the sky has a strange cutaway into black. There’s seemingly this drawing of grassy hills in the background and a special box that quickly cycles between a mushroom, flower, and a star. If the player touches this box, the images stop and the player is awarded whatever item Mario touches in the form of a card. Mario then walks off the level and the level is complete.

Another feature that is often used by more experienced players is the warp whistles. If the player uses a warp whistle, then the player is whisked away via whirlwind to a warp zone (a sort of unique 9th world). From there, players can skip whole worlds and advance through the game even faster. If the player collects two warp whistles and uses one of them in the warp zone world, the player will be warped to the pipe that leads to the final level. This can make the game go by quick, though the player misses numerous levels they can explore such as the ice world which features items and enemies frozen in blocks of ice.

Graphically, I thought this was very well done. There’s the occasional graphical glitch that appears as the game draws the next bit, but otherwise, the graphics are simple, yet effective.

The music, I thought, was well done. It nicely updates the music from the first NES Super Mario Bros game, yet features it’s own aesthetic to it. the sound effects were also well done. In the audio department, I can’t really find anything to really complain about as it all comes together so well.

Overall, this game is, without a doubt, worth playing. You can play the quick way by obtaining the warp whistles and going to the end or play the more scenic way and try and beat the game without warp whistles (at that point, you get to see the sky world, the big world and several others that are typically skipped when warp whistles are in play. I personally ran into the problem of running out of inventory slots after a while, so if you don’t use your inventory enough, the items at the end of inventory typically get swapped out for whatever new item you obtain. This is especially problematic if you’ve memorized the card match game as that game gives the players several new items all at once. Also, saving your hammers is a good idea because sometimes, there are rocks later on in the level that block very valuable spaces such as the dock in the water world.