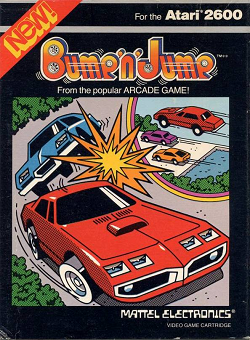 In this review, clear the river to bring you another racing game review. This time, we’re reviewing the Atari 2600 game Bump N’ Jump.

This game was released in 1983 and is a port from an arcade game released a year earlier.

You play a pink buggy and your goal is to survive the onslaught of other vehicles and, of course, massive river crossing that you need to jump over. Avoid the sides of the road and the river or else you die in a fiery death.

The further you are able to make, the higher your score. You get nice bonus points for crashing your opponents along the way.

Every so often, you’ll get a flashing exclamation mark. This is your cue that a major obstacle is coming up. You’ll likely need to jump in order to clear the massive barrier (a body of water) ahead. Even then, timing can be difficult because it’s easy to hit the button to jump only a second too late.

One good strategy I’ve employed to survive on the road portions is to stick to the middle. Since how far you bounce off of your opponents varies, you’ll sometimes find yourself flying into the side of the road yourself. On narrower roadways, it’s often wiser to wait for an opponent to drive along the edge of the road before pushing them into it. This allows for maximum space to bounce back without crashing into the other wall yourself.

You have about 3 free lives to work with, but it is possible to earn extra lives (I’m assuming from obtaining a set amount of points). After a set number of obstacles, it’s possible to reach the end. Completing the level nets you a huge number of bonus points before you find yourself on the next level.

One thing is for sure, this is definitely an entertaining game. It’s fairly straight forward to learn. It takes a bit to master, but it will challenge you all the while not being insultingly difficult. Unlike a number of other games I’ve played on this system, there is a rather obvious goal to reach and this game is broken up into distinct sections.

Graphically, this game is surprisingly well done for the console in question. The only criticism of this game, however, comes from the graphics in that I thought the light green on grey on the second level made things a little difficult. It was hard to see where the road ended and the barrier began. Still, this didn’t interrupt gameplay too much in the end and this area is only limited to a small area from the looks of things. Still, graphics worked quite well here otherwise.

The audio was also pretty well done. There’s music which is a huge thing for a game of the time. to add to this, there are sound effects. I thought the jumping sound effects was also nicely done. This game was great to listen to if you ask me.

Overall, it’s been a while since I found myself enjoying an Atari 2600 game, but this game certainly fit the bill. There’s a logical progression, the game is easy to understand, it had a decent difficulty curve, and it was entertaining. The graphics were well done for the system and the audio was also a treat. So, I would say this is a recommended game.