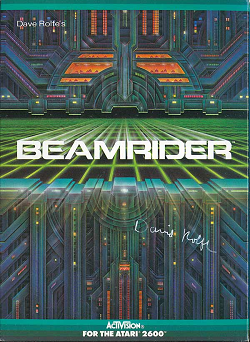 In this review, we check out the third person shooter called Beamrider. We find out if the Atari 2600 version was good or not.

Beamrider for the Atari 2600 was released in 1983. Earlier, we’ve reviewed the Atari 5200 version and gave it a positive score.

This game is much like the Atari 5200 version. You travel along 5 “beams” and square off against alien ships in increasingly difficult sectors. At the end of each sector, you square off against a boss ship which can be killed by pushing up to fire one of your three torpedoes. You have three lives and gain points for every kill.

Graphically, this game is naturally inferior to the Atari 5200 version due to hardware limitations. It still has decent graphics in spite of the limitations, but since it was released during a time when there were console games with superior graphics capabilities, I’ll have to rate the graphics on this one average.

The audio was decently done. There was no music, but the sound effects does provide some decent ambiance in this game.

Furthest point in game: Made it to sector 6 again.