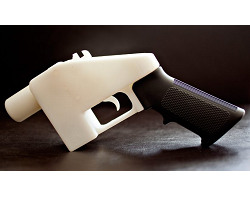 3D printing has once again soared into the forefront of public debate. We examine the copyright debate to see what it can tell us about 3D printed guns.

If someone were to tell a copyright debate observer 6 years ago that what we know about file-sharing could one day influence the debate about guns, chances are, that observer would give that person a weird look, say “those debates have nothing to do with each other” and the conversation would end. Now, here we are today, seeing a lot of parallels between the debate about file-sharing and the gun debate thanks to the wonders of 3d printing.

A quick primer of what we have seen so far.

A Texas based company has designed blueprints so that anyone with an Internet connection and a 3D printer can build a gun themselves. That very idea of anyone anywhere printing a gun at any time has a number of people extremely nervous. There is no background checks of any kind involved and they are completely untraceable and undetectable. The company behind this says that it is their right as an American citizen to print 3D printed guns because American’s not only have the right to bare arms, but also have the right to free speech.

So, there is little surprise that something like this went to court. Yesterday, a judge blocked the sale of those blueprints. From The Guardian:

A federal judge on Tuesday stopped the release of blueprints to make untraceable and undetectable 3D-printed plastic guns as Donald Trump questioned whether his administration should have agreed to allow the plans to be posted online.

Eight Democratic attorneys general filed a lawsuit Monday seeking to block the federal government’s settlement with the company that makes the plans available online. They also sought a restraining order, arguing the 3D guns would be a safety risk.

The US district judge Robert Lasnik issued the order Tuesday afternoon, saying: “There is a possibility of irreparable harm because of the way these guns can be made.”

The company behind the plans, the Texas-based Defense Distributed, had reached a settlement with the federal government in June that allows it to make the plans for the guns available for download on Wednesday.

The restraining order puts that plan on hold for now.

Is that the end of the story? Apparently not. According to Fortune, 3D blueprints of guns have already circulated the web:

Nobody should be surprised about this. It’s happened before, and it’s impossible to stop.

Rewind to 2013, when Defense Distributed’s Cody Wilson first showed off his 3D-printed weapon. The State Department quickly shut him down, on the basis that he was violating arms export controls—this is the stance the government abandoned in a settlement that allowed Wilson to resume publication of the files on Wednesday, prompting the temporary restraining order.

When the State Department originally clamped down, Wilson stopped publishing the files, but other sites—The Pirate Bay and other file-sharing services—immediately stepped in to keep the distribution flowing. So, over the subsequent five years, the files have never been out of circulation (even if the products they create are incredibly dangerous for the shooter, as well as those around them, due to materials quality issues).

For a vast majority of those who watched the copyright debate, this means “game over” to anyone wanting to stop the blueprints. The files are out there. It is especially so given that they are on BitTorrent file-sharing networks.

Of course, some might wonder, had those blueprints not made it onto the web in the first place, would they have been stopped dead in their tracks? During out report about the Voksi raid we noted that the stopping of Voksi doesn’t mean video game cracking will cease. In fact, we pointed out that others will not doubt step in to continue cracking copy protections of various video games.

The first way is to go after the individuals sharing the files themselves. As may know about file-sharing lawsuits, that won’t ever be useful. Even if you found ever individual in the original BitTorrent swarm and arrested them, the process of tracking those individuals down will take time. IPs have to be traced (which are never that reliable to begin with) and subpoena’s have to be issued. Someone has to physically go to these individuals and make the arrest in the first place. In all that time, others could have snatched the blue print and the spread will simply continue. So, such a theory is quite fruitless.

The second way is to order ISPs to either block file-sharing traffic or websites distributing those files in the first place. There are several problems with that theory. First, many file-sharing clients like BitTorrent and eMule have technology put in place to obscure their traffic. It is to protect from traffic shaping and thwart Deep Packet Inspection (DPI). Ultimately, it proved to be an unwinnable arms race.

Meanwhile, blocking websites at the ISP level has also proven to be a fruitless endeavour. For one, VPN’s circumvent website blocks thanks to encryption. Second of all, proxies also circumvent such blocks. Thirdly, the TOR network pretty much laughs at the idea of ISPs being able to block access to certain websites. Additionally, files can very easily pass from one site to another – sometimes in jurisdictions where enforcing certain laws can prove to be very difficult.

Even if every printer now suddenly abides by that standard, it still isn’t enough. Just ask anyone who knows anything about mod chips for consoles. Devices can be chipped and as long as someone can figure out and publish instructions on modifying a 3D printer, someone somewhere will be capable of performing that service.

A fourth method is to choke all financial incentives off. If anyone is involved in 3D printed guns, cut off all financial supplies and make sure money stops flowing for these individuals. Naturally, that brings up the use of paying for this sort of service in cash. Better still, some people might use something like Bitcoin to help cover their tracks. It never stopped some from making money and it certainly won’t magically start working now.

A fifth and final method is to somehow control the output. Ban all 3D printed guns and arrest anyone with the gun in the first place and confiscate the gun. At that stage, you are ultimately treating a symptom and not the cause. It’s the same reason why destroying hard drives with copyrighted material solves nothing other than deprive one person of the material.

While some may think that maybe a combination of these possibilities would work or even ill-advised “pure determination”, there simply is no stopping it. As we have laid out, you cannot control the production of the blueprints, the spread of said blueprints, the use of those blueprints, the financial transactions revolving around 3D printed guns, and the ultimate output. That covers every step in the chain.

The bottom line is that 3D printed guns are now a modern day reality. The only thing that is ever going to change is the guns prevalence and sophistication. Really, the only thing that any kind of enforcement is going to do is hurt civil rights somewhere along the line. That is ultimately the same point the Electronic Frontier Foundation (EFF) made:

When it comes to Internet publication of 3D printed guns, those strong views can push courts and regulators into making hasty, dangerous legal precedents that will hurt the public’s ability to discuss legal, important, and even urgent topics ranging from mass surveillance to treatment of tear gas attacks. Careless responses to 3D-printed guns, even those that will do little to limit their availability, will have long-lasting effects on a host of activities entirely unrelated to guns.

Really, the only advantage we have in watching this particular gun debate is that we currently have precedent to go by so we can more accurately determine how things will shape up as a result of certain actions. Grab a hold of something solid, we’re probably going to be in for a bumpy ride. As for those who hope to stop the spread of those guns? It will prove to be a never-ending fools errand..