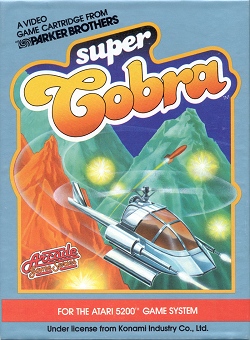 In this review, we shoot our way through the Atari 5200 game Super Cobra. We find out if this side scrolling shooter game is worth trying.

The game has a simple concept. You take control of a single helicopter. You have to pass through some very dangerous terrain. At the end, there is an item you need to pick up. If you get this special item, you win the game.

There are a number of things standing in your way, however. One big obstacle is the numerous enemies. One of those enemies is the rocket. They can randomly take off. A second enemy is the tank. These tanks randomly shoot in the air.

You’ll also notice very quickly that another immediate obstacle is the terrain itself. In the first few levels, you’ll be flying through narrow caves which give little room for error. The terrain is probably the biggest and most frustrating obstacle throughout the game. In addition to narrow caves are enemy underground bases.

As you progress through this game, you’ll encounter other kinds of enemies. These enemies include randomly falling objects, flying enemies, and even UFO’s – some of which shoot at you.

You’ll notice on the screen the progress meter along the top. This progress meter represents the mileage you’ve covered. Each level represents 500 miles. Each rectangle represents 1000 miles. In total, this game covers a massive 10,000 miles to cross over. If you reach the last 500 mile stretch, your objective changes from a point to point objective to a recovery objective. You need to collect the rectangle with the dollar sign and make it out with this object in-tact to beat the game.

You get four lives. If you lose all of your lives, you’ll be able to continue the game, but with the score reset back to zero. This means that the only limit to you beating the game is simply your patience.

Another threat is your own fuel tank. If you run out, the helicopter will nose-dive into the ground. To re-fuel throughout each level, you need to destroy small round brown fuel depots. If you touch them, you die, so blasting them is your only option.

One thing that can be particularly off-putting for gamers is the steep difficulty. The game starts off tricky and only gets harder from there. In fact, some of the levels require pure luck more than anything else. This is because some tanks are strategically placed so that you are left with simply hoping they don’t fire when you fly through your escape rout. In late levels, you almost need near pixel-perfect precision to make it through the tightest of routs.

Another big limitation to this game is that you can only fly to the middle of the screen. While this doesn’t sound like a big deal, the terrain makes this limitation an exceedingly frustrating one.

The firing rate can be a little frustrating as well. If you are staring down an enemy, a miss means you may have to wait until the bullet vanishes off the side of the screen before you can fire again. As a result, you can end up crashing into an enemy with the fire button held down.

The speed in which the helicopter moves is quite slow. This what makes terrain particularly perilous. You need to utilize the entire moving space just to make it over some ledges before the screen shoves you into the ground. This is yet another factor in making this game frustrating.

Generally speaking, though the basic ideas presented in this game give this game potential, the difficulty can turn off gamers. It starts off challenging and only gets harder from there. The limited screen space you can use and the slow movements makes this game annoying. The variety found in this game is pretty good, but the frustration factor tends to mask some of the games better points.

Graphically speaking, this game is pretty decent. The changing color pallet between levels helps give a nice variety to the game. The multiple terrains also adds a little flare to the overall game. The objects are fairly easy to make out as well. Sometimes, objects to disappear randomly. This does affect gameplay. Overall, the graphics are pretty decent.

Overall, this game was OK. The variety of enemies and levels are a plus for a game of its time. Unfortunately, the difficulty might be a little to extreme for some players. The game starts off challenging and only grows more difficult by the level. The graphics are OK and the sound is decent enough. An, overall OK game provided you don’t find yourself throwing your controller across the room.