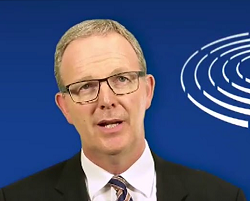 Axel Voss, architect of Article 11 and Article 13, is doubling down in the defence of the legislation. He’s continuing to attack critics, accusing them of lying.

The legislation has sparked a petition on Change.org which condemns the legislation. Last week, we reported on the fact that it made history, becoming the single most signed petition in history. That petition continues to garner signatures. As of now, that petition has garnered 4,949,060 signatures as of this writing.

Yesterday, we gave an update on the planned pan-European protests. The number of planned protests have ballooned, doubling in number since we last looked.

Of course, we could go on and on about the different organizations and signs that the legislation is not being well received. From creators to businesses to experts to organizations, it seems that in the last few months, everywhere you turn, there’s another entity opposing the legislation.

All this is not stopping Voss from pushing through the legislation, though. In fact, he’s sticking to his guns, saying that the opposition to the legislation is just some grand conspiracy by big tech companies to avoid liability. All this in spite of the massive amount of evidence that the legislation is being condemned by people of all backgrounds.

In an Interview with Deutchlandfunk, Voss spoke about the copyright debates. He issued multiple attacks on critics (German).

When asked about the liability faced by various platforms, he simply shrugged it off, saying that liability is part of every business. Businesses simply need to factor in liability into their business model. He then said that big tech companies are so monopolistic, they can handle this extra liability and the Internet won’t really change under these new laws.

Voss was asked about whether he was surprised by the pushback he received. Voss replied, saying that he didn’t expect it at first, but simply passed off the resistance of lies being passed around without scrutiny. He concludes that it’s all just myths and that people aren’t questioning it like they should.

He was then asked if it’s just young people who don’t have a clue what is going on. Voss didn’t go so far as to fully agree with the sentiment, but reverted back to saying that big tech companies are spreading misinformation in an effort to keep protests large. Because of this, the protests would keep pressure on Members of European Parliament.

Voss was then asked about the web filters, but Voss dismissed the notion. He said that the laws are about licensing content and paying more “fairly”. When pressed about the possible collateral damage such as free speech, Voss quickly went into denial. He said that the laws are not about content filtering, but instead, it is about fingerprinting content so that rightsholders can decide what to do with their material. Of course, few people believe there is even a difference here in any practical sense. After that, he continued to insist that no upload filter obligations exist in the legislation – something that has repeatedly been proven wrong by critics.

After that, Voss was asked whether or not the laws could be changed to adjust for the criticism. Voss quickly said no, saying that the laws are final. He went on to say that no one has ever come up with ideas on how to change the laws. Oddly, he said that platforms like YouTube won’t need to filter or even recognize any kind of content. This after talking about fingerprinting content in an earlier question.

At the end of the Interview, Voss was asked whether or not the majority of MEPs support the legislation. He wouldn’t say he knows for sure, but at the moment, he says he’s assuming that is the case.

So, in short, he’s not budging on the laws and criticisms are simply made up. Really, one can conclude that Voss is digging in and not willing to reach out to those willing to debate copyright. Instead, he just sees this as the opposition lying and tricking people into believing what is, well, accurately in the legislation. He won’t change the laws and he’s just hoping for passage in the final votes at this point.

In the wake of such wide-spread opposition, it looks like things will only grow more and more intense from here.