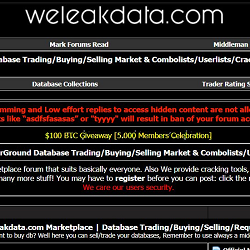 A hacker site devoted to buying and selling stolen personal information has been hacked. The stolen information includes what the site had on its members.

The long string of security incidences is continuing. Today, we are learning that the insecurity of storing personal information is reaching ironic levels. WeLeakData, a hacker website devoted to the buying and selling of stolen personal information, has been hacked. The stolen information which is everything the site had on its members is now up for sale on the dark web. From IBTimes:

Following the data breach, the attackers have put up the leaked database on the dark web marketplace for sale.

The website went down in January 2020, and many reports held the FBI responsible for the outage. However, researchers at Cyble Inc were tipped off by some anonymous members of the group that it was not the FBI, but a massive cyber-attack which took the site down for days.

A few months later, the website closed down abruptly in April 2020. According to several rumours, the WeLeakData site operators may have been apprehended by the authorities, and the site was sold off to another forum member.

Since its inception in 2019, WeLeakData is known as a fierce competitor to RaidForums where cybercriminals dump breached data and acts as a marketplace for buying cybercrime-related solutions. The site has garnered immense success for its platform and the type of leaks it has published since day one.

This isn’t the first time we’ve seen this kind of ironic situation. Last year, we reported on the hacking of Brian’s Club, a carding website devoted to stolen payment cards. The apparent stolen information was stolen again at the time.

In this case, it appears as though WeLeakData is now no more. The data breach was apparently the last straw in the efforts to keep the site online. The site itself appears to have been replaced by LeaksMarket which seems to be an effort to pick up where WeLeakData left off. Still, it looks like a few hackers are now getting a sense of what their victims have gone through.

From there, it’s been a daily security incident. It started off with the Unacademy data breach. That saw 22 million accounts compromised. After that, there was the Cam4 data leak. That saw 10 billion records exposed. Now, we see this data breach today. At this point, we are wondering if there is going to be an end to this streak of security incidences.