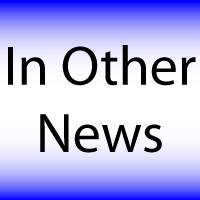 We look back on the week in headlines we’ve seen around the web. They may not quite fit in other sections, but they certainly will fit here.

A Slight Problem With Celebrating a 150th Anniversary

No word if anyone is looking around for a few extra spare sharpies for any signs that were already made.

We all know accidents do happen at work. One Umatilla County police officer certainly has first hand knowledge now if he didn’t have it before. Apparently, an officer was dealing with a suspect. The two got into a scuffle after the suspect allegedly became belligerent. That’s when the other officer came onto the scene and pulled out his taser. When the taser was fired, one prong hit the suspect and the other hit the officer. Since the two were in physical contact, both got hit with the taser. Ouch.

After the incident, the officer that fired the taser apparently felt guilty about it. So, he naturally made a cake for the officer he hit. A picture of the cake along with the officer who got hit was posted. The cake is white with blue frosting which reads “sorry you got tased”. The picture is definitely worth a look, believe me.

He Couldn’t Come Down the Chimney With Care

He tried to break into a business by sliding down a chimney. For those who know all too well what happens when criminals try to break into a business using this method, it usually doesn’t end well for the criminal. According to NBC, the alleged burglar got stuck and had to call 911 for help. Authorities were able to free him before promptly arresting him. Said the report, “No word if his getaway vehicle was pulled by eight reindeer.”