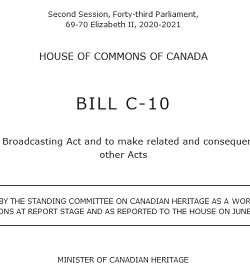 Rankings can have a huge impact on a users success. So, we decided to offer a visualization on what could happen under Bill C-10.

One of the arguments against Bill C-10 is that this legislation regulates user generated content and, by consequence, free speech. The impact of prioritizing and de-prioritizing content really shouldn’t be underestimated. After all, there is an entire multi-million dollar industry devoted exclusively to making sure people’s content ranks well on search engines and other platforms. There is a good reason why there is a whole industry devoted to this: the payoff is massive and potentially life altering.

We know this first hand what a well placed link on a social news site can do. In fact, some sites live and die by the ultimate traffic spikes they can get from various platforms. A spike in traffic can, in turn, generate a large boost in ad revenue and, as a consequence, also bring in potential new fans to the site. If you are just starting out, this is huge.

There is a similar system in place for platforms as well. If you get a video or podcast to place well on different queries, you can very easily gain a new following quickly. This is especially so if your content happens to be really good. However, if you are relegated to the 400th result, chances are, you won’t be getting any real traction at all on the platform.

What I mentioned above isn’t exactly secret. If you create content of any kind, this sort of thing is common knowledge. It’s essentially SEO (Search Engine Optimization) 101. If you’re content ranks well, you get more traffic. If your content ranks poorly, you won’t get much traffic.

Recently, we’ve been hearing comments coming out of the Senate about Bill C-10. This revolves around whether or not Bill C-10 really is regulating free speech or constitutes censorship. So, does it constitute censorship, not directly. Yes, your content will still be up. The government isn’t ordering your content be taken down. However, the effect of this legislation might as well be censorship.

Of course, writing out the complexities of how SEO works can cause some people’s eyes to glaze over or just get lost in the details. Luckily for us, we have knowledge in graphic design and can punch out something basic in short order. So, if text isn’t making any sense, then maybe pictures will.

Let’s take a look at a basic web layout. Yes, it’s not perfectly designed, but that’s not the point:

It looks like there is a lot of content already. Still, you think you can cut through the noise. You got some experience with how content is ranked on this site. You also happen to know a little bit about how the algorithms work. So, armed with this knowledge, you decide to produce a video and arm it with some fancy effects as well as a strategy to get that content to rank very well.

So, with a bit of hesitation from the nerves, you publish your first video. Will it get well received? Will people trash it? You don’t know for sure until you try. You think you did well, but the proof will be in the results.

(the box with the maple leaf is your video)

Well, that would be why it’s doing very well. You got the third result and it’s netting 7,816 views. According to the site, you need 10,000 views to start monetizing your content. Give it a few more days and you’re practically there! The money will start flowing in and you’ll be able to start funding your next video. It’s not much at first, but you are already on the verge of generating revenue. You already have a few ideas of what the next few video’s are going to be and, chances are, they will be quite successful on the back of this breakout success.

Rewind to the competition. You see some video’s on the site. You have ideas on how to rank well and what kind of content people would be interested. So, you spend a few days producing this video. With that sense of nerves, you eventually hit publish to see how well your video performs.

Well, the top four video’s are all by these big production companies. They aren’t all that great and your content is so much better, yet it isn’t ranking. OK, honestly, where is your video? Oh, if you squint hard enough, you’ll notice that there is a second page. You click over to the second page and, sure enough, that’s your video. 7th result and getting almost no views.

Irritated at why this is happening, you start sifting through the documentation on the site. Why isn’t your video ranking well? Well, as it turns out, the CRTC has ordered the website to rank well known production companies in the country higher than everyone else. It’s the law that was mandating these results. Can you somehow let the site know that you are also a Canadian producer to get in on this? As it turns out, yes, there is.

You are then directed to another page with this massively long form. It’s asking for what your intended audience is. Intended audience? Doesn’t “everyone” count? It’s also asking for all your financial information as well. That’s a non-starter. You don’t want to put your financial information online after seeing that massive data leak on another site. It is also asking for access to a whole bunch of personal details. You know what? This whole endeavor is just not worth it. Frustrated, you hit the close button on that tab.

It has become evident: you are definitely not going to make it as an online content producer. Well, maybe you can make that Walmart job work for a few years. Who knows? Maybe you can one day get out of that job and find some half decent career that pays the bills. One thing is for sure, it isn’t going to be through that dream job on the Internet, that’s for sure.

For the few that insist that is isn’t going to happen, this scenario was drawn directly from reading and analyzing the legislation. After that, we simply paired it with our experience with how the Internet works with respect to content in real life. Is it censorship? Your content is still technically up. However, it is relegated to non-prime real estate that can very easily ensure that you will never get the audience you’d otherwise get.

Does the effect depend on how the CRTC requires algorithms to function and how the platforms wind up responding? Sure. However, the effect will definitely still be there. The only real question is, to what degree? Should Bill C-10 pass and litigation is not an option, we are now left with hoping that the negative impacts are going to be minimal. Little wonder why online Canadian creators are against this legislation as well.