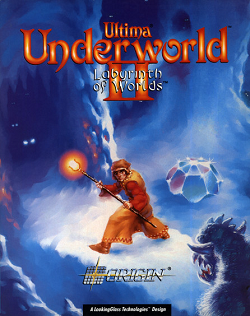 In this review, we check out the RPG game Ultima Underworld II – Labyrinth of Worlds. We find out if this sequel builds on the previous iteration or not.

The story goes that you are in a castle in Britannia. Suddenly, a giant gem-like dome appears over the castle, trapping all of the inhabitants (including yourself as the avatar) inside like the Stephen King story. A being called the Guardian appears as he tries to take as much power as he can from your world. It us up to you, as the avatar, to find a giant blackrock gem in the sewers, travel the planes, cut off the Guardians lines of power, stop him, and save Britannia.

One thing that is noticeable is that the HUD has been reduced to some extent. Gone are the animated dragons and, instead, there’s simply a still frame which you peer through as you venture around in this new world.

Another thing about this game is that there are plenty of elements that were brought over from the previous game. For instance, the melee attack style is the same ‘charge and strike’ system (as seems to be appropriate to call it). You hold down the attack button and when the gem flashes green, you release for a strike of your weapon with the most power behind it that you can muster.

Plenty of enemies also make their return including reapers (tree-like enemies), the headless, fire elementals and ghosts. Largely, they remain unchanged from the previous game.

The system of magic has also returned with you having to combine rune stones you find to cast spells. Like the previous game, your mana will recharge over time in many areas.

One major change is how you develop skills with each level up. You can gain skill points, but you have to find trainers in order to develop these skills. Even then, a given trainer can only offer a certain set of skill types to train up. Still, I’m not aware of there being any kind of cap on how high you can take your skills. Just know that you have to spend skill points in the process. I thought this actually was an improvement over the previous way of gaining skill where you would have to approach a large statue and figure out which code works to gain some training of a particular skill. Unfortunately, I found this to be somewhat imperfect as I found no problem finding magic and sword fighting trainers, yet most skills seemed to have eluded me for the most part.

I found that a lot of reviews gave this game a lot of praise, but I am not of the same opinion that this was an amazing game. My problem with this game was that it was barely an RPG game. It was an RPG game in that you earn experience points through battle and you can level up, improving your character. you also can take the roll of a certain kind of character like a fighter or a magic user, but this ultimately is where the resemblance of an RPG actually ends.

Instead of running around, accomplishing specific quests and slaying hoards of enemies like one would expect of an RPG game, most of your time is spent trying to find the correct door or the right person to speak to. After that, you have to say the right things and perform very specific tasks that have less to do with fighting in many cases and more to do with diplomacy and puzzle solving.

In fact, this game strikes me as largely a puzzle game instead. For instance, just getting out of the castle to enter the sewers is quite a chore because the entrance to the very first level of the game is behind one of a small handful of hidden doors. Even after you figure out your escape from the castle, the tough puzzles ahead don’t typically get any easier. Just figuring out how to enter other worlds through the large gem took me a good while to figure out (it turns out, if a side is slightly lit up, that’s when it’s possible to enter it. Even then, it’s a single color side with no indication of where you are going).

In order to get through the difficulty of figuring out what it is I even had to do, I pretty much needed a guide and a speedrun video on YouTube to get a decent idea of what I was doing. If it weren’t for those two things helping me, I would have gotten stuck much earlier and simply lost interest in the game. With the speedrun and the guide, I had a vague idea of what I was doing and I still was on the verge of quitting a couple of times in frustration. Ultimately, this game simply assumes you know exactly what you are doing already on the get go. If you didn’t know what you were doing, you would been in for a number of hours banging your head against the wall trying to figure out what it is you needed to do to trigger the next plot point to advance in the game.

I get that puzzles really help spice up the action in the game and made things interesting, but it doesn’t have to be this hard to catch my interest. In fact, if they are too hard, it encourages me to simply throw my hands up and abandon the keyboard more than anything else. Players need a sense of progress from time to time and if it isn’t there, it’s only a matter of time before they quit like I eventually did.

One of the big strengths of this game is the different worlds you encounter along the way. You can find yourself in a large castle with large cats, wandering through a goblin run prison, skating around on the icey surfaces of a wintery chasm, fending for yourself in a world filled with fighting arenas, or poking around in a psychedelic labyrinth filled with teleporters, long hallways, and alien-like creatures. Once you get to one of these worlds (or “planes” as they are referred to in this game sometimes), you are often greeted with quite the visual treat.

I also thought the battle system was nicely done. It was largely intact from the previous game and, as the saying goes, “if it ain’t broke, don’t fix it!”. So, I was happy with that.

Graphically, what won this game a lot of praise with many is the fact that it’s in a full-fledged 3D environment. While it’s still a novelty for the time, it was becoming less so. So, it was nice to see some 3D objects thrown in like barrels and chests. It was still largely reliant on 2D sprites, but that is expected for a game of its time. The environments were a nice addition to the visuals throughout. So, graphically speaking, this game did need to step things up in some small way to give high marks and this game largely accomplished that.

The audio was a mixed bag for me. Some of the music was very repetitive after a while. Sometimes, the music has that sense of trying too hard while other times, it is so barely audible, you wonder if something happened to the music. I think this game would be better if the music volume levels were much more normalized instead of having the loud blaring music of the castle of Britannia vs. the almost non-existent music of the icey world. One big question I have is why the removal of the music for the map? I thought this was a nicely done feature in the previous game, yet for some reason, developers felt the need to remove that from this game. I thought this was a poor decision. The sound effects had nothing wrong with them though. The jingle of winning a battle (or a boss battle) was a nice touch. The death sounds of most of the enemies were nicely done and the other effects were neat.

Overall, this game was not what I expected. It was barely an RPG with puzzles and diplomacy dominating what you have to do to get through the game. The really unfortunate part of this game is that the puzzles are frustratingly hard with clues sparsely laid out for you to follow. This really hurt the game experience for me. The graphics were nicely done and the sound effects were good, but the music was a bit of a letdown for me. Ultimately, the difficulty of the puzzles ruined my experience with this game. It had a lot of potential, but I can only view this as a missed opportunity.

Furthest point in game: Opened the final two worlds and collected the blackrock gem in one of those levels. Found the gems in all of the other levels. Severed nearly all of the Guardian’s lines of power, but quit before entering the void just because I got too tired with this game.

Points I nearly gave up in the game:
– Leaving the castle
– Entering a world
– The academy level