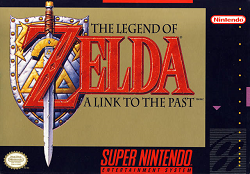 In this review, we equip the Master Sword as we take on another action adventure Zelda game, The Legend of Zelda: A Link to the Past.

This game was released in 1992. It would be the first Zelda game to make it to the SNES. We are already a bit familiar with the series. We’ve already reviewed the original Legend of Zelda on the NES and gave it a positive review. We also reviewed the sequel, Zelda II – The Adventures of Link and gave that a great score. So, we were interested in reviewing what some consider one of the greatest SNES games ever released to see if this game lives up to the hype.

You can name your character anything you like in the surprisingly limited character, well, limit. However, the general name of the hero is Link. This is also the first time a family member of Link has been portrayed. You are in bed on a rainy day and Links uncle says he has to leave the house. He tells you to stay in the house, but after he leaves, the first thing you end up doing is, well, disobeying your uncle and chase after him. Zelda, the Princess of Hyrule, communicates to you telepathically and convinces you to rescue her.

As you follow her instructions, you find a secret passage. The passage leads you down a pit where you find your uncle. He tells you that he didn’t want to involve you, but has no choice at this point. With his dying breath, he hands you the sword and tells you of the spin technique. Armed with your sword and a shield, you venture forth deeper into the dungeon where Zelda is crying out for help.

You have three heart containers at the beginning. Because of this, you can’t really take a whole lot of damage from enemies in the beginning. Fortunately, many of the enemies are not that hard to kill. You take on bats and rats found throughout the dungeon and sewers. As you get closer to rescuing Zelda, you’ll also encounter guards. They range in difficulty to defeat from easy (green), to medium (blue) to hard (red). Later on in the game, you’ll encounter harder to defeat enemies, but this is what you get in the beginning.

Most of the enemies will generally drop nothing, however, some will drop the odd item here and there. Some may drop rupees while others will drop hearts. As you progress later on in the game, enemies may also drop magic potions that restore your magic, bombs, or even arrows. If you are lucky enough, an enemy may even drop a fairy, though this is very rare (only happened to me twice). One item noticeably no longer being dropped is the stop watch which was featured in the very first game.

As you progress through the dungeons, you’ll notice numerous features. These features include pull switches, shallow watery areas, and lamps that you can light up. The lamps can brighten a dark room, though you can also occasionally find a puzzle that requires you to light up all of them in the room. This can be tricky because, after a while, the lamps will burn themselves out after a while. So, rushing to light these lamps can be critical to your success.

In later dungeons, you’ll encounter other obstacles, traps, and hazards. These can include pits, bottomless pits, bumpers that push you into pits, color-coded switches, weak floors, moving floors, and weak walls. Fortunately, the game introduces these obstacles to you bit by bit, so you can familiarize yourself with how they all operate before things get complicated.

Each dungeon contains some very familiar items. This includes the map and a compass. The map reveals the whole dungeon layout. Meanwhile, the compass points to the room where you’ll be fighting the dungeon’s boss. Another feature making a return here is the fact that most dungeons contain a special item. Some of these items can be critical to your success in fighting the dungeon boss while others can simply be critical in allowing you to advance through later dungeons. Sometimes, these items are critical in accessing these dungeons. While not every special item is found in the dungeon, a vast majority of these items are.

While keys are a very familiar dungeon feature in Zelda games by this point, a large key is certainly a new feature. If you find the large key, you can unlock all the special locks in the dungeon.

In the first part of the game, also known as the world of light, your objective is to speak to a sage known as Sahasrahla. He tells you that you need to obtain the three pendants. These pendants are found in individual dungeons. If you defeat each of the dungeon’s bosses, you’ll not only obtain a heart container to increase your health capacity, but also a pendant. Collect all three pendants and you’ll be able to wield the Master Sword.

In the second half of the game, you’ll find yourself in the Dark World where it was supposed to be the golden land where the tri-force resides. Unfortunately, evil has twisted it and is a land filled with monsters and many other nasty things. Your next obtective is to free the decedents of the sages. Like the pendants, if you complete a dungeon, you’ll obtain a health container to increase your health capacity and release one of the kidnapped women.

While the main objectives in the game seem clear enough, this game is anything but straight forward. In keeping with a general tradition, this game is an open world concept. This means that while you have main objectives, you’ll be spending plenty of time doing other things. One of the big side-quests is collecting as many partial health containers. If you manage to find one, you’ll complete a quarter of a health container. Naturally, if you collect four, your health capacity will increase by one heart.

Other side quests involve you collecting new abilities and special items – some of which are critical to your success. This is probably what makes this game much more interesting than your standard adventure game as you can go off on these side quests at any time and the adventure and path more or less becomes yours.

Also along the way are numerous shops and opportunities to spend your hard-earned rupees. This can include minigames and buying items or even purchasing small hints. Also, in this game, an oracle exists. If you run out of ideas of what you need to do next, the oracle is willing to impart ideas to help you along if you get stuck – for a price of course.

A major improvement in this game is the map system. While previous games did contain maps, the mapping system is definitely an improvement over previous games. The map shows some level of detail what Hyrule looks like. Some characters are even able to mark your map to help you find the next location. This took a lot of guesswork out of the game that really held back previous games.

The downside to this game is that a huge number of obstacles were introduced to this game. Even if you knew what was the next dungeon, getting to it can be extremely tricky. Sometimes it involves using a number of your items while other times, you need to utilize clever switching between the two worlds.

This confusion sometimes leaks into dungeons where you’ll encounter some rather difficult puzzles. Getting stuck didn’t happen to me anywhere near as much as the dark overworld, but it did necessitate having a guide handy to refer to whenever I got stuck. Generally, I could play through most of the game without assistance, but I did need the occasional prod from a guide to help me along from time to time on the later portions of the game.

So, my general experience with this game was interesting. Would I say it was a great game experience? Yes. There was a lot of content and a lot to experience. The choose your own path elements also really worked in this games favor. Would I call it the best SNES game I have ever played? No. I’ve personally played better, but this was still a great game to play. This game took what was found in the past two games and refined the good points and fixed some of what broke the previous games. That I can certainly appreciate.

Graphically speaking, this game had a lot to be impressed by. The turning of the heads of random people added a sense of life to various NPC’s (Non-Playable Characters). The map was nice and clear. The environments were very nicely realized. The occasional introduction of 3d pseudo-objects were quite impressive. I would say that this game was a great effort in this department.

The audio was well done. While not the greatest SNES soundtrack I have ever heard, the music was nicely done. The sound effects also worked very well too.

Overall, I don’t know if this game really lives up to the hype I’ve heard surrounding this game (namely this being the best SNES game ever made), however, this was a great gaming experience. There was some small complexity issues and, I thought, the storyline got a little on the thin side towards the middle. Still, the large number of optional quests and open world concept was definitely great. The map system and oracle really fixed what broke the first game. This was definitely a great game to play in my view.