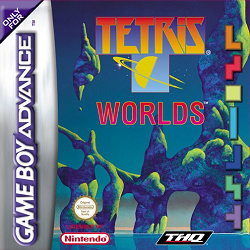 In this review, we look for some natural scenery as we play the Game Boy Advance game Tetris Worlds. We find out how this puzzle game plays.

This game was released in 2001 and was since ported to other systems. We’ve reviewed numerous versions of Tetris already. The best one we’ve reviewed was the Game Boy version. We’ve reviewed the NES version which also got a great score. We also looked at Tetris Plus which got a mediocre score. In addition to that, we reviewed Tetris DX for the Game Boy Color and that got a pretty decent score. To add to the pile, we also reviewed The New Tetris on the N64 and that got an OK score. So, we were quite interested to see what this version of Tetris had to offer.

This game offers two main modes. There is the marathon version and the Ultra version. The main difference between these two modes is the fact that in Marathon, the clock counts up and you get unlimited time to accomplish a particular goal. Meanwhile, Ultra puts up a time limit for you to accomplish those same goals – adding to the overall challenge to the game.

Regardless of which version you choose, you’ll get your choice of types of games you want to play. Whichever one you choose, they all have one thing in common: they have 15 levels. If you complete all 15 levels, then you win.

The first mode available is Tetris. This is more or less the classic Tetris style game. Your goal is to complete lines. If you make your goal, you’ll advance to the next level. This mode offers bonus lines for completing doubles, triples, and a Tetris. Otherwise, the single line will reduce the line count by one. There’s really nothing to this mode beyond that.

The second mode you can try is Sticky. In this mode, the colors of your Tetris pieces are more or less randomized. If a piece of the same color matches, they will stick together. Otherwise, if there is open space above where you placed your piece, the remaining pieces will fall down. If they complete lines, they will remove them from the board. While completing lines help, the ultimate goal is to simply clear out the starred bottom line. With each progressive level, the pieces will not only fall faster, but the number of garbage lines will increase as well. In some respects, the game is easier because of the aspect of falling pieces. The game is also harder because you have to focus on the colors of the pieces and figure out if the pieces will fall or not. Even while clearing out lines, pieces will fall, adding a certain degree of randomness. What makes it more difficult is the fact that you suddenly realize how much you’ve been relying on the colors of the pieces the whole time in other modes of Tetris. This can make it more challenging in determining which “L” shape or “S” shape pieces will fit where on the fly.

The third mode is Fusion. This curious mode features 1×1 “fusion” pieces. Like the previous mode, this game features junk on the screen. Clearing lines will help, but is not the ultimate goal of each level. Instead, each level features a fusion start piece either on the bottom left or bottom right hand corner of the play space. You have to connect the fusion pieces to that corner in order to knock down the goal number. If you complete a line with the Fusion piece, the line will clear away with the exception of the fusion piece. If a space opens up below, they will fall down – often leading to cascading lines in the process.

The fourth mode is called Hotline. The goal in this mode is to complete lines just like normal Tetris. However, you have to complete these lines at certain heights where the wires are located. Only lines cleared at the goal heights will count towards your total. The higher the line you clear a line on, the more lines you get for clearing that line. Be warned that pieces will fall if there is space below, so you may find your pieces collapsing if lines are completed below. This can force you to rebuild your stack from scratch. Not necessarily a good thing in Ultra mode in later level.

The fifth mode in this game is Square. If you’ve played The New Tetris on the N64, the rules are quite similar. You can complete lines so they count toward your goal, but the faster way of doing this is to complete squares with your pieces. To get a silver piece, you need to take four Tetris pieces and position them in such a way to form a 4×4 square. If you later clear lines with this square, you’ll get a multiplier bonus for your efforts. Meanwhile, you can also get 4×4 gold squares. While they do count for larger line bonuses, they are much harder to get. This is because they require for of the same pieces to form that 4×4 square. The only pieces you can’t get gold squares with are the “S” pieces.

The sixth and final mode offered to players is Cascade. Cascade is just regular Tetris, only leftover pieces will fall down if there is nothing but open spaces. If you cause a “Cascade”, then you’ll receive bonus lines which will help you make your goals faster. One could argue that this mode is probably the easiest because all you need to do is keep completing lines. If you are getting up to the upper half of the screen with pieces, this mode almost rewards you for doing OK because, sooner or later, you’ll cause major cascades, causing the goals and levels to fly right by. If you stay at the bottom, only getting ordinary singles, you’ll spend more time trying to get to the goals – especially in later levels.

One criticism I’ve heard about this game is the fact that you can just keep rotating pieces so they don’t fully drop. This allows players to take their time when it comes to how fast pieces fall, thus breaking the game because it is way too easy. This is true to some extent. In marathon mode, you can effectively slow the game down doing this. However, you have to strategically play pieces in certain ways, otherwise, it is impossible to rotate the pieces over certain “peaks” of your play space. In Ultra mode, it’s a different story because you have the time limit. While you can survive situations more easily, slowing the game down won’t necessarily make making your goal much easier in later levels as you always have the threat of running out of time.

One criticism I personally have with this game is the fact that it hardly rewards you for doing well. If you complete all 15 levels, all you get is a message screen at the end congratulating you on your accomplishment before you get booted to the menu screen after. In numerous other Tetris games, you at least had some sort of rocket launch or other animation to commemorate the moment. This game fell even further short of this, making the accomplishment seemingly hardly worth it. I got either a message that said that I was on my way to being a Tetris master or that I was a Level 1 Tetris master.

So, generally speaking, while it is possible to make the game a lot easier, this only helps in some ways, but not others. It was great to see the many different modes of play available. What might have made the game better is a vs. computer opponent mode of play as well. That might have helped make the game feel more complete.

The graphics were interesting in this game. While there is a lot of imagery of outer space in the menu, those images almost completely vanish in the actual gameplay itself. Instead, you get random images of nature combined with animated wildlife throughout. The only exception is some of the ocean life swimming past the moon which was an interesting background. Occasionally, you’ll also get to see random Tetris blocks float by and take a look at what you are doing. While the animations were sometimes not the highest quality in the world, they weren’t bad either. Overall, the graphics were decent.

The music was decent. Some of the tracks were quite laid back. This leads to a bit of a mismatch with what is going on screen. It’s a little strange to hear some of the upbeat or slow tracks play while you are frantically trying to survive level 14. Still, I thought the tracks like Square Dance and Line Dance were pretty decent. The sound effects were pretty decent as well.

Overall, this game has its strengths and weaknesses. The strengths include the many modes of play offered. They showed a nice level of creativity on the part of developers and helped give something to this game that was memorable. The weaknesses include the piece drop system that did make the game a little easier than it probably should have been as well as the disappointing and lackluster endings for each mode of play. The graphics were decent and the audio was OK. Overall, an interesting game to try.