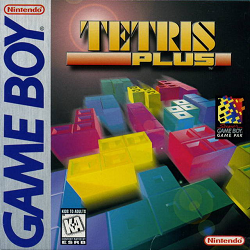 In this review, we line ourselves up with another Tetris game. This time, we give the puzzle game Tetris Plus a try.

Tetris Plus was released in 1997 and is supposed to be a new twist on the old classic game Tetris.

Ultimately, there are two main modes of play: Puzzle and Classic. Puzzle makes up the bulk of the gameplay.

Where things get interesting is the series of spikes along the top of the playing field. The spikes will destroy everything they touch including the blocks and the professor. If you drop a Tetris piece above the line of spikes, that piece will simply be destroyed. This means that you don’t lose simply by piling the blocks too high. This works great for essentially discarding pieces that aren’t that helpful. However, if the professor touches the spikes, then the professor dies and it’s game over.

As time goes on, the spikes will gradually move downward. This decreases the amount of space you have to work with. If you get a triple or a Tetris, then this moves the spikes up by one space. While that is visually a great thing to see, I found that the more you push the spikes back up, the faster the spikes come back down. I had one game where I managed to get three triples. While that moved the spikes up a total of three spaces, I could barely get four pieces back onto the playing field before the spikes moved down another level – much faster than before I got the triples. While I’m sure it buys you time, it doesn’t buy you anywhere near as much time as you would think.

One frustrating element is the fact that sometimes, you have to time the falling of pieces so the professor won’t be tempted to climb directly into the spikes. Sometimes, the timing is off and the piece lands, catching the side of the professor just enough for him to climb. Often, I found that was an instant game over because I couldn’t drop enough pieces to lower that pile so the professor would survive making it to the top. It is especially difficult to time things when the professor is close to the spikes and is running back and forth on three spaces.

On the bright side, pieces don’t typically fall that quickly. This puts the emphasis on strategy and figuring out where you should place pieces and doing so to race against the falling spikes. So, there is a positive element to this.

One criticism I’ll give this game is the fact that the difficulty of these levels are sometimes all over the map. You have four locations, so when you start one, the beginning levels are nice and easy. The later levels are quite difficult. If you happen to beat all of the levels in the location, you get to go to the next location where the difficulty seems to reset. I thought this was poorly thought out because there were probably a number of levels I could beat, but I can’t access them because I’m busy pulling my hair out of a particularly hard level towards the end of one location. This area of gameplay could have used some work in my view.

The other mode in this game is classic mode. While some say it’s simply the regular Tetris with slightly different visuals, I found this assessment to be misleading. In the classic Tetris game, you gain levels by clearing away 10 lines. In this version, you don’t necessarily have to clear 10 lines to gain a level. Instead, the game hinges more on time. If you are simply dropping pieces, the two blocks on either side of the playing field will gradually rise. If they make it to the top, then they flash and you move to the next level. The blocks fall back to the bottom and you continue the journey from that level to the next in the same manner. You gain levels quickly by creating lines. If you get a single, the blocks will jump up a little. If you get a double, they’ll jump up a bit more. A Tetris, as you could imagine, will push the two blocks up the furthest in a single instance.

Another key difference is the fact that the difficulty of the levels increase much more gradually. This allowed me to go far beyond, say, level 20. In normal Tetris, level 20 was a very lofty goal. In this version, level 20 isn’t such a lofty goal and I found myself advancing well past that.

Generally speaking, another improvement is the fact that when a piece touches another already placed piece, it doesn’t automatically mean you’ve set that piece. Instead, there is a notable delay. This can be critical to your survival because it gives you a little more margin for error. The one thing about this is that you have to ensure that the piece is actually laid or else you may move it to a bad spot before it’s actually all the way down. Something to watch out for as you play and are anticipating the next piece.

One final mode we’ll cover is the edit mode. You can generate your own puzzle mode levels simply by using the in-game editor. This, I found, did extend the life of the game by a bit.

Generally speaking, while others have said that this game is a terrible play, I’m inclined to disagree. I wouldn’t say it’s an amazing game, but it wasn’t terrible either. There is some entertainment to be had playing this game. Perhaps there was some anticipation that this game would be as innovative and fresh as the original Tetris, but I think that’s holding this game to too high of a standard. Still, there are a few aspects of this game that could have used some improvement.

Graphically, this game was OK. It wasn’t amazing, but it did have small cut scenes that did help break the gameplay up a bit. The treasures, while seemingly meaningless, also added some much needed visuals where this game was otherwise a bit lacking in variety. So, the graphics did do what they could.

The audio was a bit of a miss for me. While the music in and of itself wasn’t bad, I thought the sound selection was quite limited. As a result, the gameplay gradually gets drier and drier after hearing the same song loop over and over again. It takes a lot of gameplay to get to the levels with new music. The sound effects were OK, but nothing special.

Overall, some say this was an absolutely terrible game. I’m inclined to disagree with this assessment, though this game does have problems trying to stand out from the long shadow of the original Tetris. The puzzle mode’s difficulty is a bit all over the map, but does have its own interesting quirks. The classic mode, while baring a strong resemblance to the original Tetris, does have some interesting differences to spice up gameplay. The falling pieces element was slightly improved as well. The edit mode does extend the life of the game, so nice effort on that front. Still, I can’t honestly say this was an amazing game. It was OK and mildly entertaining, but simply can’t compete with the original Tetris. Good for killing a few hours, but little else.