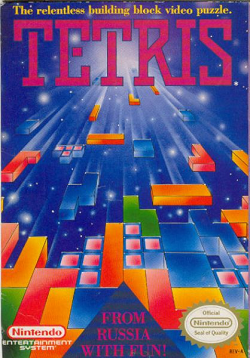 Tetris is one of those puzzle games with countless versions, but for players that got their start gaming on the regular Nintendo, this was probably their first encounter of the seemingly immortal game Tetris. We take a look at this extremely early version to see how well it stacks up today.

For this game, we go clear back to the year 1986. This game featured the classic four block piece system and is pretty much how the original Tetris was intended to look and feel.

The objective is simple, complete full horizontal lines using the randomly given pieces. Allow the pieces to reach the top and it’s game over.

Players start with an option to select the one of three songs they want to hear in their game and which type of game (A or B) they want to play.

Type A is the classic version of Tetris which just continually goes until the player dies. Every ten lines advances the player one level. Each progressive level gets gradually more difficult as the pieces fall faster with each progressive level. Players have an option before play starts on which of the first nine levels they wish to start. From there, the player can advance well into the double digits in terms of level. The player can tell when he or she advances a level by the sudden change in overall colour pallet and the level denotation just below the next piece graphic.

Type B is somewhat different. No matter which option the player selects before the start of the game, the objective of 25 lines remains the same. There’s still the original level that the player can select, but there’s also a height setting. The height determines how much garbage first appears on the screen at the beginning, increasing the initial difficulty.

At the end of the game, players can be treated to a general animated sequence. For type B, there’s a sequence where musicians play for the player briefly. How many musicians appear depends on how difficult the settings are. The hardest difficulty allows the player to see a full compliment of characters, many of which are characters from other video games.

In type A, players can see a space launch. The better the player did during the game, the more spectacular the space launch.

At the end of each game, a score is tallied and, if the player get’s a high enough score, they can input their name in a sort of hall of fame section. In Type A, score can increase dramatically as the player advances in levels. Clearing our lines at once (or, getting a Tetris) can give the player a very nice boost in score. Score also adds up simply by placing pieces. The higher the piece placement, the more points the player can get. Clearing lines in the harder levels also advances the score quite nicely as well.

In Type B, it’s much easier to score higher if the difficulty settings are set to higher difficulties. So, while it may be harder to complete a Type B round on the highest height and the hardest level, completion can easily land you in the top spot on the hall of fame whereas the easiest settings would make this a much more difficult task.

Audio, the music is quite classic and timeless. Can’t say I dislike the music as it worked quite nicely. The sound effects are simple, yet effective.

Graphically, it’s simple and straight forward. While it’s possible there could have been more added, it really wasn’t necessary. The animation sequences after was a nice touch though and it really helps this game shine, even today. what is in this game in terms of graphics is certainly sufficient.

While the basic premise of the game would more than feel familiar to players, I think this game is really showing it’s age. Many variations of Tetris allow you to see more than one piece in advance. A number of variations allow you to “hold” blocks. Others can allow the player to do last minute rotations before a piece is set. Some give bonuses for putting pieces in specific configurations. Sometimes, unique pieces are introduced to spice up game play. Sometimes, gravity is introduced to certain blocks in under particular circumstances. You’ll get none of that in this version. Essentially, by today’s standards, this is a very stripped down version of Tetris. With the exception of the two different modes of play and an interesting rolling statistics shown on the left side of the screen, this is a very bare-bones game. Still, it’s hard to knock a game that’s so simple, yet enjoyable. Special animations are ultimately optional in Tetris and there’s only simple effects thrown in to this version.

Back when this game was first introduced, it’s very easy to see the addictive nature of this game. In fact, a certain amount of fun can still be extracted from this version of Tetris. Still, I think many players today might find this version of Tetris a little boring after a while. So, great for back in the day, but today, it does show signs that age is starting to take a toll on this game.