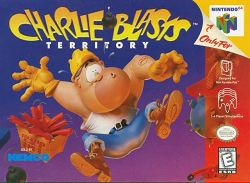 Charlie Blast’s Territory is a puzzle game released on the N64 with the simple premise of removing all explosive materials from the playing field. We take a look and see if this is a good puzzle game to try out.

This puzzle game was released in 1999 and would be one of only a handful of puzzle games ever released on the N64. The game follows a protagonist by the name of Charlie Blast, a demolition expert with the quest of, well, blowing things up.

This game is essentially a new interpretation of a very old game called Sokoban. The player can only push objects around a tile-based grid system. There are, however, major differences.

Players can also “jump” over many of the pushable objects. This gives the player more freedom and power to move the blocks around in particular ways. As long as there’s an empty space at the end of whatever it is Charlie is jumping over, the player can traverse whatever items are in the way.

There are also a number of different objects to complicate things as well. There’s the ever-present spike square where a spike moves, well, up and down through a hole. If the player walks onto this square, the spike will stab Charlie, forcing him to move to the previous square. while this may seem like a way of blocking your way, players can move objects on top of these squares. This seems to stop the spike from moving. If the player wishes, they can just move an object onto that square and jump over top of it, bi-passing the spike altogether.

The whole goal isn’t to just move objects onto certain squares. Instead, players have to create an up to down/left to right/combo of the two chain that starts at the red bomb. The player must light the fuse once the chain is complete and move to a safe distance away within the allotted 3 seconds to survive the blast. If the player survives and all explosives are cleared after, the player will be able to move on to the next level. If not, the player has to start over again on the same level and try something else. After each level that is completed, a series of playing cards reveals the password to get to the next level. What do playing cards have to do with blowing stuff up? I’m not really sure. A unique system of giving passwords, sure, but related? No idea how.

At first, the player is merely setting off crates of TNT, but in later levels, there is also the introduction of blue bombs. The difference between the two is that TNT will set off any other explosive that happens to be around it. Blue bombs can be set off by something that explodes next to it, but they won’t carry on the chain and ends whatever chain reaction is happening on that square. This can add another dimension of difficulty to the game. Also, players can’t jump over blue bombs apparently.

The audio is nothing special in this game. It breaks up the silence, but that’s about it. The sound effects are fairly generic, but again, nothing special.

The graphics may do a decent job of depicting Charlie, but otherwise, there’s nothing special here either. There’s the effects of explosions and the cubes flying everywhere, but there’s seemingly nothing impressive about all of this.

Overall, I got bored quite quick while playing this game. I did make it to the second world, but I wasn’t all that enthusiastic of solving that puzzle on level 11. sure, some puzzles offer that problem-solving challenge, but I still felt “meh” about the whole process at best. The game certainly tries to offer something beyond what Sokoban initially offered, but it really fell flat to me. The controls were even a little quirky to work with which really didn’t help this game either.

Furthest point in game: Level 11 before I got too bored to continue.