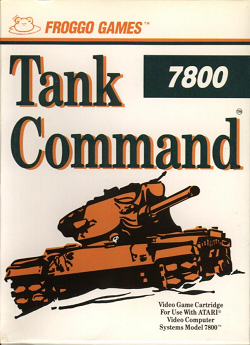 In this review, we drive through the Atari 7800 game Tank Command. We find out how well this top down shooter game plays.

The objective is to travel as far north as possible before dying.

One thing you’ll probably notice right away about this game is the fact that tanks are apparently extremely delicate. One hit from enemy fire will cause the tank to break apart. If you run into an enemy tank, you and the enemy tank will break apart. Even a foot soldiers pistol fire will cause tank death. So, moving around with caution is highly recommended.

Initially, you might think that the energy meter is how much health you have. In actuality, the energy meter is a measurement of how far your shot will travel. You can use the alternate button to determine how far your shot should be. Since it takes a bit to decide, it is ideal to just pick a distance you are comfortable with before simply settling on a specific distance. On the plus side, it is nice to have that option in the first place even if you only fiddle with it once.

Along the way, you’ll encounter many enemies and dangers. There is, of course, enemy tanks that fire at you. In addition to this, there are bomb drop locations, SAM sites, gun emplacements, foot soldiers, and the occasional (though seemingly otherwise harmless) enemy tractor that travels from left to right on the screen.

Even though your tank is apparently delicate, you do get a reprieve with 7 lives. It is unfortunate, but it is possible to burn through these lives rather quickly if you aren’t careful.

Of course, this game isn’t quite that simple. Another factor to keep in mind is fuel and ammo. You have a fuel gauge that tells you how much fuel you have left. If you die, you get a full tank again. Still, if you run out of fuel, you’ll be unable to move. You can replenish this fuel via the oil drums item pickup. You also have a limited number of shots. This ca b replenished by picking up the tank shell. Still, these items are scarce. If you get good at surviving, not running out of fuel can be your biggest challenge after a while.

One thing to notice is the fact that it isn’t the bullets themselves that kill your tank. It is the ensuing blast that kills the tank most of the time. Once you figure this out, it is more than possible to start formulating strategies to survive the gauntlet.

Another strategy that can be useful is knowing how gun emplacements fire. They will fire straight or at a 45 degree angle. This leaves significant blind spots in any other angle. These can be exploited for an easy kill. Still, you need to keep in mind other enemies in the area.

Enemy tanks can appear from both the North and the South. This, of course, adds a big challenging twist to the game. Sometimes, they even just drive toward you and kill themselves just to take you out as well. So, by no means is anything a sure thing in this game. You can just set up strategies to increase you chances of survival.

The one thing I found with this game is the slow pace in terrain changes. In fact, when I reached level 2, I only noticed one new building and the addition of the SAM site. While that doesn’t sound like a big deal, the thing to keep in mind is the fact that the levels are very large. I found making it to level 2 a big achievement in all honesty. As a result, the game didn’t necessarily do a good enough job at retaining my interest. It requires a lot of patient to play this one.

Another problem I have is the fact that the game doesn’t handle 45 degree angle shots that well. If you shoot diagonally, your shot will go way further than your shots that go up, down, left, or right. As a result, I found myself working working around this strange quirk in the game.

Generally speaking, this game doesn’t throw a lot at you at a time. Change in level terrain takes a lot of time to take place. As a result, gameplay can be, at times, a little stale. The diagonal shots are weirdly calculated. Your tank gets killed very easily. Though the 7 lives help a lot, they can be drained quickly without careful conservative play.

Graphically, this game is very average. The one thing I will say is the fact that the tanks are very oddly drawn. Instead of a long thin cannon that starts at the middle, you have this white garbage can sticking out the front. More reference material might have served the developers well.

The audio is a pretty big weakness here. The intro music is pretty weak. The rest of the game simply has sound effects for play. The sound effects are very basic. Because of a lack of music in the game itself, the staleness of the gameplay is even more pronounced. Overall, it’s pretty disappointing.

Overall, this isn’t a very strong game. It has basic gameplay there, but it can get stale after a while thanks to very slow changes throughout. The tanks are too delicate, though the 7 lives you get numbs that criticism somewhat. The game ultimately taxes your patient. The tanks are not well drawn and the audio was pretty weak. While not a terrible game, it is a difficult game to pull entertainment value from.