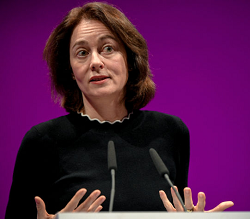 The German Justice Minister, Katarina Barley, is recommending that the German government adopt the copyright directive. She suggests small platforms get a rejected blanket license exception.

Yesterday, we brought you word that German free speech advocates are urging German citizens to keep up the fight to save the Internet. This is because they are eyeing a critical vote that could derail the laws adoption on the 15th. As we pointed out, this is definitely a long shot to save the Internet. Still, it is better than it being a hopeless endeavour.

Now, we are learning today that recent government signals show just how tough the fight will be. German Justice Minister, Kararina Barley, has signalled that she is recommending that Germany adopt the Internet censorship laws. According to Suddeutsche Zeitung (German, English translation), the Justice minister is trying to maintain that the censorship laws are for larger platforms like Facebook.

This, of course, is likely to try and win over the small business community. Back in February, when it was still possible to have the law rejected at the Union level, the German small business community resoundingly condemned the laws, saying that it will kill small and medium size businesses. That, in turn, will leave only the major platforms left to survive.

So, the question becomes, how is Barley proposing to handle the copyright laws? She said that smaller businesses could simply opt for a blanket license so that they can avoid the crippling censorship machines which would likely otherwise run them out of business.

Unfortunately, as we reported earlier, Europe has already rejected any kind of blanket license. This move, of course, confirmed that the copyright debate has nothing to do with paying creators money and more to do with killing the Internet in the eyes of most.

Still, it puts into question how workable the solution is when you got a minister saying that smaller platforms only have to pay a small license fee while Europe is saying that there is no ‘special way’ for Germany to avoid the censorship machines through license fees.

Furthermore, it is no doubt worrying for German citizens that the government is seemingly using an “adopt now tweak later” strategy especially in the face of a “no compromise” strategy employed by the European Union.

One things for sure, German free speech supporters have a tough road ahead of them if they hope for any kind of success.