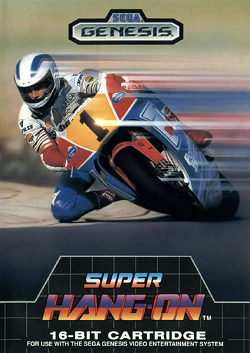 In this review, we hit the turbo boost in the Sega Genesis game Super Hang-On. We find out what it’s like to play this racing game.

This game was released in 1989. It is a port from the arcade game.

You play a motorcyclist. If you play the arcade mode, your mission is to complete a race. If you are playing the original mode, your goal is to beat every rival on the various tracks.

The first mode this game offers is arcade mode. In this mode, you can take on one of the continents tracks. The goal in each race is to make it to each checkpoint within the time limit. If you are lucky enough to be successful, you beat the track. Otherwise, it’ll be game over for you.

One thing to note about this mode is that you can use a speed boost right away. You must reach 280KPH before you can use it. Any speed under and you can’t use it.

Original mode is a bit more complex. You start the game with no money, a bike with the most basic parts, a mechanic and a bottom of the rung sponsor.

The sponsor pays out for results in every race. For each sponsor, you get the smallest payouts if you are forced to retire from the race. You generally get bigger payouts for completing the race. If, however, you defeat the track rival, then you get a sizeable boost in cash.

To beat the track rival, you must complete a “lap” with a faster time than your rival. Checkpoints are a great indicator on how well you are doing, but it is the total time that determines the winner. Between you and the rival, the first to 5 wins becomes victorious.

If you become victorious, then you not only move up to the next track, but also take on a new rival and get a new sponsor. As a general rule, the payouts increase for every new sponsor, so you are able to afford and maintain more expensive parts.

If, however, you lose to your rival, you’ll get knocked back a level. You go back to your previous sponsor and take on your previous rival. While you do have the advantage of a more powerful bike, the payouts will return to what they were before, so maintenance of your bike will become more difficult.

In the event you fail to defeat your rival on the first level, you’ll simply retain your sponsor, bike, and money. This allows you to make another attempt. In total, there are 7 levels for you to take on.

When you start your first race, you’ll notice that your bike has terrible performance. The steering leaves a lot to be desired, the grip just isn’t there, the breaks are of minor help, and the acceleration is bad. This is because of the parts that you get. The bad news is that the payouts at the beginning are so bad, the most you can afford is general maintenance of the existing parts. As you advance to later stages, the performance you get out of better parts is very noticeable. So, the performance isn’t going to be terrible forever.

Another thing to note is that regular speed is capped out at 280KPH. It’s possible to obtain the speed boost, but only as a late game addition. Otherwise, count 280PKH as the games speed cap. This speed can be reached with the worst parts, so you are merely boosting the performance of your acceleration and steering throughout the game.

There are three challenges in this game: the track, the rivals time, and the other competition on the road. In the first level, the difficulty of the track and the time are generally the bigger challenge. As you progress through the game, the difficulty of each factor fluctuates. So, adjusting your style is essential for maximum success.

If time isn’t much of a challenge to you, a more conservative approach may be your best bet for each race. Slow down on corners and wait for a nice straight away when traffic becomes a bit heavy. If the track is generally easy, but you find yourself in a time crunch, a more aggressive style of racing may be more optimal in the long run. Try threading the needle between opponents or risk moving on to the shoulder to get around an obstacle. Strategies, of course, depend on the player, but that can give you an idea of one method of racing.

The one aspect of this game I never understood was the effect the mechanic has. The more expensive mechanics are able to get me slightly more detailed analysis of the condition of the part, but beyond that, I’m not sure if they do anything for the bike.

At any rate, parts can wear out on the track. The biggest threat is the frame breaking. If that goes, you will be forced to retire. You’ll also be forced to retire from any race you enter until it gets replaced. Other parts can break down as well such as breaks wearing out or the muffler falling off. These issues won’t end your race, but they will affect the performance of your bike for the rest of the race. From a practical perspective, parts other than the frame will wear out during the race if not properly maintained. The frame is usually the first to break.

One thing that sticks out to me is the games difficulty. In arcade mode, I can’t even complete the easiest continent. I’m able to get most of the way there, but it is a tough trek to make. The original mode isn’t much better. With such crummy performance on the initial bike, wiping out is an easy thing to do. It’s especially problematic because when the frame breaks, that will set you back $1200. When the payouts on a retire are a mere $400, you could be forced to sit out from 3 races unless you built up a cash reserve somehow.

The difficulty does drop somewhat by the 3 levels because your bike can handle the corners better with the better parts available, but the difficulty will gear up by the fourth level and only get harder from there. This weird difficulty curve is particularly problematic because it punishes new players right away for their low level of skill. This will definitely deter the players with fewer patient, that’s for sure.

Another problem with this game is that some of the physics is a little off. This is especially pronounced when you are going from a sharper left turn into a sharper right turn. If you race logically, you’ll anticipate the second turn and start turning a little early in the other direction. The problem is that the game will still think you are in the first turn until you enter the next turn. When that happens, you’ll slide in the wrong direction. This often causes you to slide right into an obstacle, causing an accident. As counter-intuitive as it sounds, turning the other direction after you enter the turn is a viable strategy to counter the odd physics.

The game has a great length, but no save system. Instead, you have a password system that saves all this information. So, you can at least pick up your progress at a later time. The 5 win race system can be a bit of a drag. As a result, you are forced to do a little bit of grinding just to make it to bigger levels.

To further the complaints, there is no real map of any of the tracks. Whether it is before or during the race, you’ll get no clue whats coming up. This puts the emphasis on level memorization more than anything else. While possible given the number of times you have to complete the track, a map would have been a nice thing to have.

On the plus side of things, the store system is nicely done. I like how you are able to upgrade and modify you bike. It’s an impressive feature to see in a console game made so early on.

The 3D environment is also an impressive technological feat for a console game of its time. Most racing games are either side scrolling or operate on a top down perspective. The third person perspective is an impressive thing to see.

The graphics are very well done thanks largely to the very good third person perspective. The depth perception is surprisingly good. What I would have liked to see is a better menu though. This is because the backgrounds have a fairly stark black background. Still, the sprites are nicely done and everything is well animated. A very nice job.

The audio is alright. The music is pretty good in and of itself. The problem is that it is somewhat limited with just four tracks. It’s good that you are able to select the track before each race, but the selection dos get a little old after a while. The sound effects are decent, but nothing huge.

Overall, this is a pretty good game. The difficulty curve is a little off-putting for new players as it’s difficult right away in both modes. Physics can get a little weird at times. A map would have made things better. Things get a little bit grindy thanks to the fact that you have to win 5 times on the same track to move on in normal mode. Still, the 3D environment is nice – especially for a game of its time. The part system is also pretty good. The graphics are nice in the game itself, though the menu’s could have been better. The audio is OK, but the quantity of songs can make things a little stale after a while. An overall pretty good game.

Overall
Furthest point in game:
Arcade mode: Saw the second to last checkpoint in the beginner race.
Normal mode: Made it to level 5.