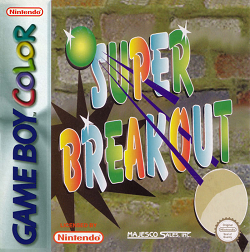 In this review, we bust up some blocks in the game Super Breakout. We find out if this Action Puzzle remake is worth playing.

This game was released in 1999 and appears to be a late port from the Atari 2600 version.

This game plays a lot like the original Atari game. You have a paddle and a ball. If you get the ball to hit a brick, the brick disappears. Make all of the bricks disappear and you move on to the next level. You get points based on how high the brick was that you broke.

One small feature in this game is, with the exception of practice mode, if your ball touches the top of the field, then your paddle will shrink to half size, making this game much more difficult. The longer you survive the faster the ball will move up and down (angle independent).

You have a few different modes. You have regular mode which just presents you with a grid of blocks to bust. There’s double which gives you two balls on the field and two paddles stacked over top of each other to work with. Lose both and it’s game over. There’s cavity which has two balls trapped in the two cavities on the field. Free them and you have a second (and maybe even a third ball) to work with. Lose all active balls and you lose a life. There’s progressive in which, after a while, new lines of blocks appear, moving the entire field down. If the blocks reach a certain level close to your paddle, they will disappear. Finally, there is practice. In this mode, you get 9 lives instead of the standard 5 and your paddle never shrinks. Practice is otherwise just an easier version of regular mode.

This particular game was actually one I was interested in trying. I was curious to see what Nintendo’s take was especially after the SNES game Arkanoid – Doh it Again because that game had lots of features and the only issue was that it was released far too late in the systems life. Imagine my disappointment when this game just doesn’t hold a candle to it. For whoever developed this game, just because this game was originally released on the Atari 2600, it doesn’t necessarily mean it should play like you are playing an Atari 2600 game. The features are very lackluster and are merely copies of modes of play found in previous versions and clones. This game literally offers absolutely nothing new that I haven’t seen in other games like Breakout, Arkanoid, Ballistic, etc.

What’s worse is that this game actually plays worse somehow. It’s impossible to hit a block on the side. Instead, either the ball striking the block counts as a hit from the top or a hit on the bottom. If you create a crevice in the ocean of blocks and fire the ball back into it again. It’s possible to hit a block on the way up. If that happens, the ball will actually travel through other blocks on the way back down as if they don’t exist. Yet, firing it back up in a very similar path that intersects the same blocks and you’ll hit the first block the ball touches.

It seems that the way this game was developed is that the game determines if the ball is moving up or moving down. It then calculates if the ball will hit the block traveling that direction. It doesn’t just detect if the ball touched an object or not.

Generally speaking, this was much more of a painful play then I was expecting. The game was just not well designed in the first place for a game that was actually a fairly simple game compared to countless other games made by this time.

Graphically, I was originally impressed by the disintegration of the blocks. Unfortunately, that was pretty much the only thing flashy about this game. The colors were basic and the graphics left a lot to be desired – even for a handheld game from this time. THe colors of the blocks change as you progress levels. While some of the designs were somewhat interesting (“OH!”, “YES”, eyes, rainbow, etc.) the stark black background and bare-bones basics just left a lot to be desired. Even the menu system was confusing because when you selected an option, you had to wait for the ball to travel to that square to know for sure you’ve selected it. Nothing highlights.

The audio was also not that great. The most you can get out of this here is changing the sound of the bricks to musical. Random notes playing was literally the best this game has to offer. There’s noisy which sometimes makes the game sound like you’re listening to a hardcore track, but it’s only one sound. The regular beeps just makes the game sound like a rather dry play.

While this game does feature some challenge to players who haven’t played a Breakout-like game in a while, the better you get, the more boring this game becomes. It does feature some of the addicting features that made the original Breakout interesting, but it was surprisingly done much more poorly. The ball physics left a lot to be desired and the movement was glitchy in strange ways. The modes of play extended the life of this game by about a half an hour, but once you’ve familiarized yourself with the different modes, it’s like this game just features hardly anything of interest. As tempting as it sounds to play Breakout on a handheld, I’d say you should give this one a pass. Not worth playing – especially since there is a host of N64 games to play by this time. Very disappointing, really.

Furthest point in game: Got bored after reaching 1,835 in practice and threw the game after. Reached 650 in progressive. Got over 300 in regular and double.