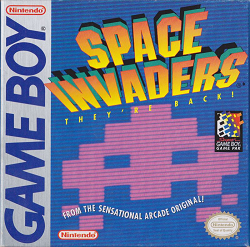 In this review, we give the Game Boy game Space Invaders out best shot. We find out how well this top down shooter plays.

This game was released in 1994. It is one of many many ports from the arcade version. In fact, we’ve tried a couple of ports earlier. We tried the Atari 2600 version. That game was pretty good. We also tried the Atari 5200 version. That port is even better. We also gave the SNES version a spin. Unfortunately, the gameplay ended up being underwhelming. So, we thought we’d give this version a try to see if it’s any better.

The gameplay remains largely the same to the other version. Defeat all of the invading enemies to advance to the next round. Use the four mounds as cover from their attacks. You have 3 lives to work with and you can only fire one shot at a time.

For every 1,000 points you earn, you gain a free life. If the aliens reach the ground, it’s game over.

Probably the only great thing about this game is the fact that it has finally been made into a portable game. Instead of sticking to larger consoles (or finding the arcade version instead), you can now play this game on the go. This, of course, is stretching the praise a little, but it is a notable positive to this version.

Another positive is that this game does stay true to the original game as best as possible. This is likely great news for those who like the classic game and want to try something that is both new while still satisfying that nostalgia.

The bad news is that this game sticks to the original formula. For newer gamers hoping for something that takes the old formula and innovates on top of it to make it another great success will be left disappointed. The only innovation is the addition of vs play, but this requires to Game Boys with two game packs. If you don’t have a buddy with exactly what you have and the proper cable, this mode will be off limits.

Because this game is basically a duplicate of the original arcade game in single player mode, it has a hard time competing against other handheld games already released. You can get through playing this in a matter of minutes to get the full effect of the game. Most games are nowhere near this short.

Because of the games length, the replay value is hampered by a lot. It’s not something you can really play all day because playing it over and over again will kill a few hours at most.

Generally speaking, this game is long on nostalgia and short on game. While this style of gameplay might be great for some more than a decade earlier, a lot has changed in the world of games since then. This game just doesn’t keep up with the times. Instead, it pushes the same formula as if to say the nostalgia will be enough for everyone. This is a gutsy bet that ultimately lost because you are left with a very outdated game. While some players who always liked this game will get some enjoyment out of this, the game ends up being inaccessible to new players because of it’s excessive simplicity.

The graphics are another big letdown. While retaining the alien looks is a good idea, leaving a stark background was a bad move. Ideally, have the backgrounds be nicely detailed and change between levels. Instead, the game ends up being an outdated game even by the Game Boy’s launch years standards. There are ways of retaining what made the original great while making this game accessible to new players and this game simply chose not to do this. So, a flop here.

The audio could have been improved so much in this game. Unfortunately, it chose to stick with the increasing two note speed. There is no music in the intro screens either. As a result, this game flops here as well.

Overall, this is a game that was made to retain everything that made the original 70s arcade a hit while only evolving enough to be playable on this handheld device. It did nothing to evolve the game in general, thus shutting out potential new players. Since so much has changed in the industry for more than a decade and a half, this game is instantly outdated. The graphics and the audio ends up being the same story. Ultimately, this is a huge disappointment because it just felt like no effort was made to bring it to the mid 90s standard of gaming.