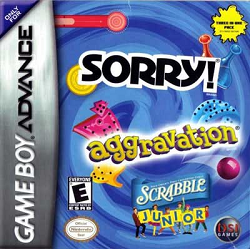 In this review, we check out another 3 in 1 game known as Sorry, Aggravation, Scrabble Jr. This 3 pack board game was released on the Gameboy Advance. We look at whether this three pack is worth looking into.

This particular three pack game was released in 2005 and isn’t the first three pack game we reviewed here. It features three classic board games which are, as the title suggests, Sorry, Aggravation, and Scrabble Junior.

Sorry is a fairly simply game. Instead of dice, there are cards you draw randomly to determine how many spaces you can move your men. A 1 or 2 will get your men off of the start circle and, if an opposing players man is on the board game, a Sorry card will also get one of your men off of the starting block and will knock that opponents man off of the board and back on the starting block. Another notable card is 4 which pulls a man back four slots. This can be bad if you are going the long way around the board, but fantastic if you use it on one of your men that’s on the first square after getting off of the starting area because it means you bi-pass a vast majority of the squares and practically go directly to the finishing line. If an opponent lands on a square with one of your men on that square, the opponent puts your man back on the starting circle and puts their man on the square where your man used to be. Another notable element of the board is the slide squares. If your man is on the end of a slide area and an opponent lands on the beginning slide area, the opponent automatically moves to the end of the slide are and knocks your man back to the starting circle.

Generally speaking, there is very little strategy involved in this game beyond that. Once you have your men on the final few squares off of the main board, they are (with the exception of the 4) safe from harms way and all it takes is the right number to allow you to win after that. If the card is too high, the player is forced to forfeit their turn if no other move is available. Beyond those little tips, this game seems mostly a chance game. It’s a few rules short of being a glorified spinner with four colors where if the spinner lands on your color, you win. With this shallow level of depth and light graphics, this game is, at best, short-lived even if you find it fun initially.

Aggravation is a lot like Sorry, only you use marbles for your men and a single die. There is also more than four players involved. 1 and 6 allows you to get off of the starting area. If you roll a 6 at any time, you use the 6 either to move your man forward 6 slots or get your man off the starting line and you get an additional roll. If you manage to roll the right number at the right time, you can land in the inner ring. This is huge because you can cut off a lot of distance in getting to the end location for your men. What the slot in the center means, I’m not entirely sure because I sometimes end up on there thinking I may have done something good, then suddenly, I get knocked off again. So, even after playing this game, the rule surrounding the center slot remains a bit fuzzy for me. If you get all four men on to the end location, you win. Similarly to Sorry, if one of your men lands on a slot with an opponents man, then you knock that man back to the starting line for them and take that position. This game seems to have more slots and, because you use a die, you can’t move as quickly, making this game a bit longer than Sorry.

Unfortunately, the similar concepts make this game have a very short shelf life and low replay value. There’s a wafer thin margin for strategy, so for the most part, this game is really a game of chance for the most part. One you play once or twice, the game, for me, got kind of boring. The graphics are passable, but it’s like the designers thought that there shouldn’t be much more effort involved once the basics were there.

Scrabble Jr. is probably the best of the three. It has two main modes. There is a normal game mode and a Junior mode. Normal mode gives you what is probably a normal game of scrabble. There’s no special spaces that allow you to multiply your score, so it’s entirely all about how you use your tiles to form as many words as you can. I must just be used to normal Scrabble rules because I had no idea, until playing this game, that there was a version of Scrabble that allowed you to see your opponents tiles. If you have a strong vocabulary or are used to games like Boggle or are into crossword puzzles, this game is probably an interesting one for you. If not, it’s likely this game will be a struggle. The other mode we tried was Scrabble Junior. This mode, billed as an easy version of Scrabble, has, ironically, a slightly steeper learning curve. The words are pre-placed on the board. You then use your tiles to start forming the words on top of them. The rules seem to be that you can only place them in the correct order and you can only place tiles two at a time. You don’t have to complete the words in a turn, but completing these words gives you points. This allows you to exercise a certain level of strategy that has similarities to 21. Again, you can form strategies based on what you and the computer player has. Once you figure out the flow of the game in that angle, you can win at least two thirds of the time.

I found both modes to be somewhat enjoyable as it does push you to use your vocabulary to the fullest. This is especially so in the normal mode towards the end of the game when you have few spaces left on the board and a collection of “z”s, “q”s, “v”s, and “w”s.

Personally, I felt that this game was kind of cheaply done. If you lose, I can understand the simple text telling you who won. Unfortunately, if you win, you simply get text that says who won in exactly the same way. So, I felt that there was little reward for actually winning the game other that an acknowledgement. This was kind of disappointing in my books.

All three modes have their own theme tune and end game music. There is an additional tune at the beginning menu. The music is limited, but since these games don’t really last that long anyway, there’s little risk of of them getting repetitive. I found them to be passable, but the best one seems to be from the Scrabble Jr. Junior mode as it really fits with what the game is themed around. I would say the audio was anywhere between passable to half decent.

The graphics in this game are nothing special. With exception to Scrabble, the games are simply a still shot of the board and basic for the most part. Scrabble at least allows movement from around the board to give some interest, but that’s about it. So, I’d say the graphics are, at best, passable, but bland for the most part.

Overall, you’ll likely get some mileage out of the Scrabble Junior game, but the other two games makes this game game mostly a “play once or twice and throw it away” game. Interesting for the curious, but little else.