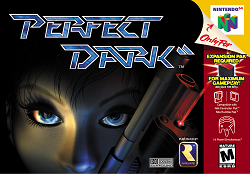 For some, Perfect Dark is the pinnacle of first person shooters on the Nintendo 64. Considered the spiritual successor of Goldeneye 007, we look at whether or not this game is worth the praise.

This first in what would be a short series video game was released in 2000. It would follow-up another titan in the world of first person shooters, Goldeneye 007 which was also released on the N64. It would not only retain some of the elements that made Goldeneye such a huge success, but also expand on them in a much more enriched environment.

Some would say that this game is basically Goldeneye with aliens. While an accurate description, the insinuation is that this is a cheap knock-off of a hugely successful title and nothing more. Nothing could be further from the truth in that regard. This game has a whole lot going for it including much better graphics, more complex levels, more intricate objectives, and multiplayer modes with computer players of varying difficulties.

The game is, naturally, set in a futuristic environment with flying cars and, what the main protagonist, Joanna Dark, uses, a small drop ship. She works for a company called the Carrington Institute. As you fly through the city, you are informed of how the plot begins. Dr. Carrington briefs Dark on a mysterious entity called Dr. Carol. It is up to Dark to rescue Dr. Carol from another corporation called DataDyne before his mind is wiped. You are then dropped onto the top of a skyscraper in the middle of the night and begin your mission. What ensues is a character filled storyline with an engaging plot that takes Dark from the bowels of the Chicago streets to Area 51 to even outer space. With a dash of politics, a certain amount of suspense, a degree of mystery, and, of course, loads of action, this game has pretty much everything an engaging video game should have.

Where this game built on those concepts numerous as well. Goldeneye had mostly one story flat levels with the odd perch and elevated areas. Perfect Dark’s level design can be multiple stories tall and take you through multiple environments in the same level (crash site with the wide open snow fields and the caverns to name one example). Goldeneye had a huge arsenal of weapons. Perfect dark has a huge arsenal of weapons with many of these weapons containing a secondary feature (pistol having a pistol whip function for instance). Goldeneye had a multi-player mode with various kinds of games to be had. Perfect Dark has a multi-player mode with various kinds of games to be had with computer player opponents and “challenges” that can be tailored to one player or multiple players. Goldeneye had bullet holes that are left behind as well as several kinds of special effects. Perfect Dark had that as well as more detail, camera effects, and more detailed lens flairs.

Each level had its own unique set of challenges (airbase forces you to stun guards at the beginning for instance). There are multiple ways of failing an objective. There are even multiple ways of completing an objective too (there is a choice of doors you can place your mine in the Chicago stealth level. Any door on the exit side of the building will complete the objective in question). There is even the subtle feature of what you do in a previous level will impact the next level in small ways. What door you place the mine on in the Chicago Stealth level will determine what door will explode in the G5 building (secret agent and harder only).

Each mission has four different difficulties. Agent is the easiest difficulty where enemies can’t take very much damage. It takes more hits on you to die on agent. Also, there are typically the fewest number of objectives on agent. Secret agent is a medium difficulty. Enemies can take more shots, your health meter goes down faster, there are more security cameras on some levels, and there are more (and often more difficult) objectives to complete. Perfect agent is the hardest. At times, it’s next to impossible to complete the level because you can die from half a dozen or more hits whereas you can empty entire pistol clips into enemies and all they’ll be is injured. The only saving grace is that head shots can still take down enemies in one shot. The final difficulty is dark agent. This difficulty allows players to adjust various settings to determine how hard (or how easy) the mission is going to be. There is a full compliment of objectives (carried over from perfect agent) and you will not get the usual gold star for completing the mission on this difficulty. This is more of a “just for fun” difficulty.

If you complete the whole game on agent, you’ll unlock a special extra mission (Blonde’s Revenge). Completing the game on secret agent unlocks dual. Completing the game on Perfect Agent unlocks War (the only mission I couldn’t unlock in normal gameplay, admittedly – though I did get close). You get access to the three main difficulties on the first mission. From there, the difficulties available on each successive mission depends on which difficulty you completed on the last mission. The exceptions, besides the first mission, are the bonus levels where you unlock the difficulties by completing the mission on an easier setting first.

In addition to all of this, each mission is timed. If you complete certain missions on certain difficulties, you’ll be awarded certain cheats. Some cheats are extremely easy to get. It pretty much requires you to just complete a certain mission. These cheats usually just offer a little extra eye candy. Other cheats require you to practically speed-run through the mission just to make the time (just try getting the invulnerability cheat by just taking your time in that mission – not happening). You cannot get anything new if you complete any mission using any cheats, but it is interesting playing certain missions with different cheat codes activated for fun.

Another part of the menu from the beginning (outside of “solo 1 player mission” which is what I was describing above) is Carrington Institute. This is a departure (a very good one at that) from the Goldeneye game. Selecting this will allow you to explore the Carrington Institute and use some of the various training simulations. There is the gadget training missions which merely teaches you the various gadgets available in the game. There’s the various terminals which teaches you certain elements of the game (such as usable vehicles or the different weapons you have found in your missions). The holo room allows you to practice various stealth maneuvers. There’s the firing range which, I found, unlocks the most goodies in the game. You’ll get to shoot at various targets (for the bronze star) with limited amounts of ammo and time (silver and gold stars) and even have restrictive accuracy in the process on some. If you complete the game in solo mode, you’ll have a full complement of weapons to work from. The more gold stars you complete, the more “classic” weapons you’ll be awarded in the cheat menu (weapons from Goldeneye).

Another feature in the menu system is co-operative mode. This allows you to play with either another player or a computer player (which operates differently than the combat simulator players). You can complete the various missions found in single player, only this time, you earn silver stars instead of gold stars. While an interesting twist to the game, I found that the simulated “buddy” ends up blowing your cover more often then not, though support fire is appreciable.

The combat simulator feature in the main menu is the multiplayer mode. You can enter with anywhere between 1 and four players. The simulator has a set of challenges ranging from really easy to FPS pros only difficulty. Each star is earned depending on how many players join you in the combat simulator. As you complete each challenge, you unlock various features for regular multiplayer. The best features tends to be new maps. The most advanced map I ever earned was the base map.

The last interesting feature I’ll bring up in this review is the counter-operative. This mode is more a “just for fun” mode, but the premise is that the second player takes control of one of the low health guards and tries to stop player one from completing the mission. Again, an interesting twist, but not very well used to my knowledge.

One nice little tip I learned in this game is to make use of windows. Similarly to Goldeneye, enemies cannot see you through doors. If a door has a window (as is the case on the Pelagic 2 mission), then you can simply aim your gun through the window at the head of the various guards on the other side. Some guards will merely cycle through crouch and standing positions, but not fire at you. Other guards will run towards the door to open it. Try and kill the running guards first before picking off the guards that stay behind the crates. You’ll be able to clear out a lot of enemies without taking any damage that way.

Graphically, this game was impressive. There’s all these intricate details (i.e. the last hallways in the investigation mission) to be found. The various effects like getting poison were impressive. The special effects like the explosions and the lens flares were very well done. The use of box drawing in your field of view was nicely done. The little meters that denote things like ammo and health were nicely done. The menu system was excellent as well. The only thing I can think of that was a negative is the models that simplify hands into being permanent fists. While covered up decently in the cut scenes, I thought this did detract a little from all the other eye candy that was involved in the game. Overall, the graphics were excellent all around – almost perfect for a game at the time.

The audio was a huge plus in this game. The music was not only excellent within the game, but the music was also excellent outside of the game as well. Many of the songs can really stand outside of the game which makes me give perfect scores in this area. The sound effects were fantastically well done. The voice acting added to this really helped elevate this game over the top and made it better than Goldeneye (which merely used subtitles as dialogue). So, flawless scores in this area as well.

Overall, this game is totally worth playing. It’s one of the best games to be had on the N64 and probably the best first person shooter game available on the console. I’ve played this game multiple times and it’s always a very enjoyable game. You really can’t go wrong with this game. An excellent game all around.

Furthest point in game: I remember completing the Attack ship on Perfect Agent and unlocking challenge 24 on the battle simulator, but that’s about it. Did get all of the gold stars on the firing range though.