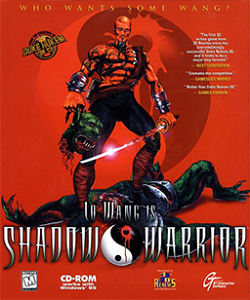 This review covers the first person shooter, Shadow Warrior. We find out if this old game a good one to dig up again.

This game was released in 1997 and would later be the subject of a major remake.

The plot is basically Lo Wang wanting to fight corruption in the Zilla Corporation. Part way through, Wang meets Master Leep. In his dying words, he tells Wang that his training is complete. He also says that Wang must avenge his death. From there, the path is set. Throughout the game, Leep will occasionally appear in Wang’s mind to send him messages.

At the beginning of the game, you get two weapons – your fists and a samurai sword. These are definitely weapons you use when you run out of ammo in the game, but I also found the sword to be useful in combating the killer bees. Fists also have a use in that if you encounter some training equipment along the way, repeatedly hitting them will gradually recover health.

Along the way, you’ll get to pick up other weapons like a machine gun, a riot gun, a rocket launcher, a rail gun, and even shurikens to name some of the weapons in the game. Many of these weapons have secondary and even third uses. Technically, your sword is the secondary use of your fists. You can switch from a single machine gun to a double machine gun. Your rocket launcher can switch from regular rockets to heat seeking missiles to even a nuclear weapon. Switching modes simply entails retyping the associated number.

Also along the way, you can pick up inventory items. These include a gas mask, smoke bomb, gas bomb, and the ever useful portable medkit to name some examples. Smoke bombs are useful in that if you want to clear out a room without entering it, you can simply throw in a smoke bomb to choke out lower enemies. You can also cause some damage to bosses with this method as well. Portable medkits are the item I personally used the most. They can store 100 health and they can replenish your health if it gets low (all the way up to 100). You can replenish your medkit by picking up another.

Other items you can obtain are regular red medkits that can replenish 20 health each. You can also pick up body armor. The black armor can add 50 armor while the red armor can give you a full 100 armor. Additionally, you can pick up the sometimes funny fortune cookies. Picking one up will reveal a message that is sometimes just a joke. One of those jokes was, paraphrasing, man who fart in church sit in own pew. In addition to the randomly selected joke, you get a bonus 50 health.

Each weapon has their own ammo limit, but the soft limit for health is 100. Most health pickups will stop at 100, but the hard limit is 200. The only thing that will boost your health beyond 100 are fortune cookies. So, with a full medical kit, the most health you can carry is 300.

This game has a puzzle element to it. As such, there are keys found in this game as well. Sometimes, they are literally keys that are bronze, silver, gold, and red. Each corresponding color fits into their corresponding lock which most typically opens doors. Also along the way, you can pick up key cards which also has their own color set: red, blue, yellow, and green. Sometimes, levels have a mix of keys and keycards, but most simply have one set or the other. Just note that the locks sometimes varies in appearance.

Also along the way, players will encounter puzzles. Sometimes, it’s just simply finding the right combination of switches to press in order to open. Some of them are as elaborate as using a remote control vehicle to carry keys to within reach. Sometimes, you simply need to find a repair kit and move a vehicle to a particular location so you can jump up to a particularly high ledge.

I have to say, the variety of things you can do in this game really gives this game a particular edge. Sometimes, I find myself playing a shooter and all it is is just blasting away enemies and running down a narrow corridor. This game throws in a lot of variety to help spice things up. While there is variety, the various elements are very simple to understand. I think that is key in making sure this game doesn’t go from simple fun to hard to understand and overwhelming. It’s a very careful difficult balance to have and I think this game achieves that quite successfully.

I think the only criticism I have with this game is that there are parts of the game that are particularly difficult to get past simply because the next part you must pass through is a little too well hidden. The ladder in the chimney is one good example of this as I’ve played this years ago and again recently. Both times, that part tripped me up and I had to consult a guide to get me out of that jam. Fortunately, these kinds of obstacles are not encountered that often, so don’t hurt the overall playability too much.

At the end of each level, you can see how well you did in the level you just completed. You can go for a completionist angle and try to kill every enemy while finding every secret. Alternatively, you can go for the speed run angle and try to beat either the par time (kind of challenging) or the 3D Realms time (very challenging). In either case, this doesn’t, in and of itself have any impact in your game progress, but some of the secrets are useful with what they have in them (fortune cookies, special ammo, items, and armor). Secret areas can be found in very well hidden cracks in the wall, hidden switches that open secret doors, or just secret doors disguised as simply posters. At the end of a boss battle, you can also be treated to a brief cinematic animation as well.

One criticism comes from when this game first came out in that this game is supposedly racist. The developers had said that this game was meant as more of a parody of bad Kung Fu movies, but the criticism persists. My take on this is that Duke Nukem 3D was released the year before. I don’t think very many North American’s considered it racist. Even in level design, there are some inaccuracies of what things look like in real life. The same thing can be said for Shadow Warrior. This game is clearly not meant to be taken seriously. How serious can you take a game where you have a good chance at making a prank call every time you press the activate button near a phone? In addition to that, every time you try and activate a broken down vehicle without a toolkit, Wan jokes, “Must be American made!” I thought it was funny, personally. At the end of the day, this game doesn’t really strike me as racist. Generalizations are found in this game, sure, but that’s sometimes how comedy works. I can take a joke.

Graphically, if you’ve played Duke Nukem 3D, you may recognize some design similarities. Things like switches and locks are now taking on a more 3D look compared to the previous game. Items are almost always 3D. There’s some reliance on 2D sprites with enemies, but there are plenty of things that are 3D as well. So, that was a good thing to see, but I also have to consider other games released at the time such as Turok which used hardly any 2D sprites. In some of the red shaded areas, it was difficult to see some things. Still, these area’s are not found very often. Some of the textures could have been better, but that’s just nitpicking. compared to other games, this game was decently well done with hardly any breaks in the 3D meshes. So, overall, the graphics were decent.

The music was very suitable for the game. The music offered a nice amount of ambience throughout, though I’m not sure if much is particularly memorable. On the CD, there was the bonus rap song that was funny though. The sound effects were nicely done. The voice samples were well done, though there was the odd incident here and there where it was actually hard to understand what they were saying thanks to overlapping sound. A great example was found in the oil field level where Leep says something like “hit them where it hurts-“. After that, he says something more, but an enemy is attacking you and it ends up covering up what he says. Still, that’s a bit of a nitpick for me.

Overall, though, this was definitely an enjoyable game. It was funny, challenging, and had plenty of elements to spice things up from vehicles to puzzles. The humor was well done. There was the odd part here and there where it was difficult to make progress through the game. Sometimes, the audio overlapped and made it difficult to hear something being said. Beyond that, I didn’t have a whole lot to complain about. A nicely done game all around and definitely worth playing again.