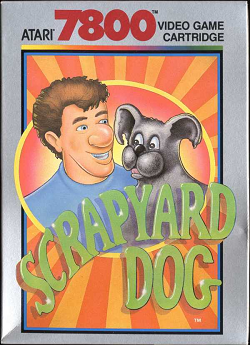 In this review, we get ready to rescue a dog in the Atari 7800 game Scrapyard Dog. We find out how well this adventure game plays.

The story follows the protagonist. His pet dog has been kidnapped. The unknown kidnapper then sends instructions to make it to a pay phone at the end of the scrapyard for further instructions. From there, it is up to you to follow the trail of pay phones in an effort to rescue your pet.

You basically have two different moves. You have the jump move which is pretty straight forward. You also have the attack move which is, for the most part, you throwing cans. The cans will bounce around along the ground and take out a large portion of enemies in your path.

Along the way, you’ll also encounter bags of money. the grey bags is worth 1 bag of money. The strange gold/pink color bag is worth a whopping 10 bags of gold. These bags are for buying items.

Throughout the levels, there are various entry points. In the first level, the entry points are garbage cans. This entry point will lead you to either a challenge or a store. The challenge in the scrapyard is to perform a song on a keyboard. This massive keyboard requires you to jump on the right key after you pit the “p” button. The better your performance, the more gold you get. If you make too many mistakes, then you may be asked to restart the challenge. Even if you do well on the next attempt, the payouts aren’t generally as high.

Meanwhile, there are many different kinds of stores you can encounter. What you get is completely in the air. One store will recycle your extra cans for a bag of gold each can. Another store will sell you cans for a bag of gold. Other stores sell magic cans (2 bags per can), bombs (5 bags per bomb), hit shields (15 bags each shield), and free lives (25 bags of gold each life).

You start the game with three lives and one hit shield for each life. That only gives you a grand total of 6 hits spread over three lives. In this game, that is not a lot considering how many things can harm you.

In the second level, you take on a street. This street level repeats some of the enemies you’ve encountered previously (like rats and tires) and introduces some new enemies (like rats and bouncing, er, objects). In the third level, you take on the sewers. This is much more difficult because you have large gaps to clear. Also, some entry points will lead to other sewer pipes.

Once you’ve completed all three levels, you’ll advance to the next world. This places you back in the scrapyard. You’ll need to take on a more difficult scrapyard, street, and sewer level complete with new obstacles and more difficult jumps.

Another setback for this game is the fairly steep difficulty curve. If you can make it through level 3, chances are, you are already heavily invested in mastering the sometimes wonky movement of the character. Considering these levels take all of 5 minutes each, that is not a lot of real estate to allow players to get used to controls and the environment.

The store system is a nice thing to see, but fairly crude. The Legend of Zelda handled store systems better by offering three items instead of just one. Because of the one item only system, it is more based on luck that you get what you are looking for.

The good news about this game is that there is mini-games in this game. It does help break up the action a bit. Unfortunately, a lot of the games are also quite difficult and require multiple attempts to start getting right on a regular basis. If you don’t get things right almost immediately, the game borderline punishes you for it.

One final comment on this is that the game tries to keep things going quickly. While fast-paced action can make the game more exciting, it also shortens the margin of error. Sometimes, you can barely react to some of the obstacles in time before you pretty much lose half your health. Dying can happen in a split unexpected second. Thanks to this, the play can be, at times, frustrating.

Generally speaking, this game is a nice attempt at taking on some of the bigger titles about 5 years ago. The bad news is that the games it is competing against by this time makes this game borderline out of date. The high difficulty curve and crude shop system also doesn’t really help this game either. The only thing this game really has going for it is the mini-game system that breaks up play a little, though it isn’t the most amazing set of games in the world.

Graphically speaking, there is a little good news. This game does feature an interesting cartoon style. This does add a little bit of style to this game. Unfortunately, the graphics just can’t compete against games on the NES system by this time. It’s very out of date when compared to other games like Mega Man 2, Zelda II – the Adventure of Link, and ExciteBike. While an interesting attempt, it still falls short compared to other games at the time.

The audio leaves a fair bit to be desired. The music was OK, but it’s weak compared to music from other systems. The sound effects are OK, but nothing huge.

Overall, while this was an interesting attempt to take on some launch titles on the NES, this game is ultimately too little too late as it took 5 years to get there. By this time, other games just dominate over this one. It’s not as though there is a lack of effort that went into making this game. Indeed, mini-games and even a store system would indicate effort went into this one. The problem is that the features are fairly crude or difficult to utilize. At the end of the day, while this game was an interesting diversion, there are far better games to be had in the market that were released by this time.