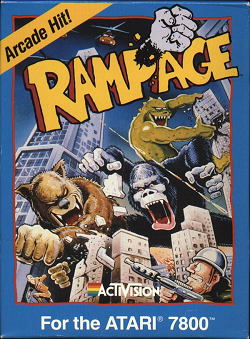 In this review, we go on a tour of destruction in the Atari 7800 game Rampage. We find out how well this action game plays.

This game was released in 1988. It is a port from an arcade game. Previously, we reviewed the Atari 2600 version and found it to be a terrible play. So, we thought that, maybe, this version would prove to be a better play.

You get to pick one of three mutant monsters: Lizzy, Ralph, and George. Lizzy is a giant lizard. Ralph is a giant rat. George is, of course, the giant gorilla.

The objective is to destroy every building on the screen. If you successfully do so, you’ll advance to the next “day”. In total, there are 132 days “of destruction”.

You get a damage meter. If you fall off buildings, get shot, or eat something you shouldn’t, you’ll take damage. It is possible to mildly replenish your health by eating food and people. The balance in this game is such that you don’t really get a chance to replenish all of your health because a shot takes away much more damage than a piece of food will restore. As a result, you are delaying the inevitable.

In terms of destroying buildings, you simply punch holes all the way up. Eventually, the building will collapse. Some buildings seem to require a down swing which will weaken the wall. Other buildings just need to stand in ruins for long enough before collapsing.

One feature that is present in this game is the newspaper. In between each level, a newspaper will pop up to give you hints. In this game, the only two hints seem to be to jump when you see clouds or the fact that there are 132 days of destruction. I never got anything besides this.

Generally speaking, this is a pretty short-lived game. It barely gives players a chance as the health you get simply cannot keep up with the damage you’ll get. As a result, rounds typically last all of 10 minutes or so. After that, you just lather, rinse, repeat until you get bored. While gameplay is somewhat improved from the Atari 2600 version, there still isn’t much to this game.

Graphically speaking, this is much better than the Atari 2600 version. Still, it leaves a fair bit to be desired for a game of its time. The only positive I see in this is the fact that the mutant frowns when low on health. The effects on the buildings as they collapse was also OK, but nothing huge. So, fairly average graphics.

The music was OK in the intro, but after that, there was just sound effects. The sound effects are pretty average. So, it wasn’t that great here.

Overall, while this game is an improvement over the Atari 2600 version, it still leaves a lot to be desired. You don’t get enough health from food and eating people. With only three lives, gameplay ends up being very short lived. The graphics are average and the sound leaves a bit to be desired. Overall, a very average experience.