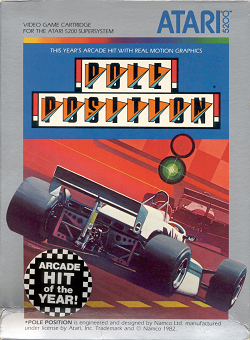 In this review, we attempt to take the inside lane in the Atari 5200 game Pole Position. We find out how well this racing game plays.

This game was released in 1983. Earlier, we reviewed the sequel to this game, Pole Position II on the 7800. We found the game to be a great game. So, it is with interest that we try the first game.

The first race is the qualifying race. If you complete 1 lap within the time limit, then you advance to the main race. The main race is a lot like the qualifier, only you start with 8 other drivers. Your position is determined by how well you did in the qualifier. In the main race, you basically race as far as you can go before the time is up.

At the end of the qualifier race, you get a tally of bonus points. Completing the race will earn you 10,000 points from distance. For every second you have left over, you earn an additional 100 points.

When you finish racing on the main event, you’ll get an additional screen that tallies points. You get 50 points for every opponent you passed during the race.

The opponents can be rather annoying while on the track. Sometimes, it’s just a matter of selecting the correct lane and staying in your lane to overtake. Unfortunately, sometimes, you get an opponent in both lanes. It is often a good idea to just ditch the track and drive on the grass just to avoid both vehicles.

The only problem with driving on the grass is the occasional sign. If you run into a sign, then your car blows up anyway, negating any advantage you gain from avoiding traffic altogether.

What’s impressive is the fact that this game takes on a third person perspective. While not unprecedented on home console, it is an impressive technological accomplishment – especially with such a level of detail that this game displays.

The downside is the fact that depth perception does leave a bit to be desired. While there is some elements of this, it can be difficult to judge distance from time to time during gameplay. This becomes a problem when yo have opponents staggers on the track.

Another downside to this game is the fact that you’ll only get to race on one track. While the track does have some variety with the bends and curves, play does become a bit repetitive after a while.

Another complaint I have is the way the gears are handled. Intuitively, you’d think up is the high gear and down is the lower gear. In this game, it is the reverse. Down shifts up and up shifts down. Why? No idea. As a result, gameplay can get briefly confusing from time to time.

Generally speaking, this isn’t a bad game. It does have its flaws such as the controls and limited track selection (1). It’s also difficult to ignore the technological achievement of getting a half decent third person perspective racing game going on this system. A half decent game.

The graphics are pretty good, but not perfect. The vehicles leave a bit to be desired in terms of quality. Still, the scenery that is added in the game is pretty good. One downside is that the scenery moves in an odd fashion. Some objects float around a little as the system struggles with getting the perspective right. The shoulder animations are nicely done, however. It’s too bad you basically get two different speeds from watching the scenery and watching the shoulders of the track.

The jingles added weren’t bad. I would say that some of it is a little drawn out as it’s unskippable. The sound effects are pretty decent though.

Overall, this isn’t a bad game. The third person perspective is impressive. The handling is pretty good. The gear shifting system does leave a bit to be desired and it would have been nice to have access to more than one track. The graphics are pretty good, though objects tend to float around and the depth perception can be hard to read sometimes. Jingles weren’t bad, though they are a little drawn out and unskippable. Sound effects are fine. An overall decent game.

Overall
Furthest point in game: Could see the start/finish line on lap 3.
Score: 43,400