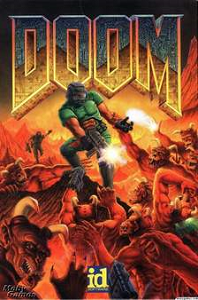 It’s a classic game ported over to the Nintendo Switch. Unfortunately, DRM is finding a way to ruin the experience.

Is there anything DRM can’t ruin? Last month, we brought you news of Microsoft shuttering it’s book “selling” service. Because the e-books were encoded with DRM, customers are finding that their book collections are being completely wiped.

Now, it seems that DRM has struck again. The technology is reportedly ruining the gaming experience of one of the most classic FPS games out there: Doom. According to The Verge, Doom was ported to the Nintendo Switch. Thanks to DRM, it is ruining players experience with the game. From the report:

Bethesda’s first three Doom games are available on the Nintendo Switch today. In order to play the titles, players will have to do something they never worried about with the originals: connect to the internet and log in to their Bethesda accounts.

Bethesda didn’t mention the login issue when the team announced that all three games were headed to the Switch at the annual QuakeCon convention today, but ResetEra forum administrator Nibel confirmed the news on Twitter

When Doom, Doom II, and Doom 3 were released, they were single-player games that didn’t require an internet connection, and Bethesda isn’t explaining why they need players to log in now. These aren’t brand-new games that cost hundreds of millions of dollars to produce; they’re ports of old games. Bethesda isn’t doing anything to alter the gameplay, either. There’s no reason for players to have to connect to their Bethesda accounts to play a game, but that’s the requirement in this case.

It looks like it’ll be a momentary annoyance, however. Doom and Doom 2 can be played offline after you log in. But it’s just the latest in the gaming community’s ongoing frustration with digital rights management (DRM), a tool often employed by developers and publishers to prevent piracy. But as more titles from earlier eras of gaming port over to new consoles, DRM tools have become increasingly scrutinized. Players don’t understand why companies like Bethesda need people to log in to their accounts to play an offline, single-player game from more than 20 years ago.

Indeed, when we played Doom and Doom II in its original DOS form, there wasn’t any need to connect to a server at all. Just load the floppy into the disk drive, install, and play. The only real anti-piracy measure is a message when you exit where you are told that if you didn’t pay for the copy, then you need to purchase it.

Some might balk at the idea of that being the only anti-piracy measure in the game, but that didn’t stop the game from being overwhelmingly successful. In the time since then, the game has been ported over to countless consoles and devices. So, really, there needs to be an incentive to buy the game on the Nintendo Switch. The DRM, unfortunately, actually makes the game an inferior version to so many others out there.

This is especially so when you consider that the Nintendo Switch is supposed to allow mobile gaming. If you are out camping and have no access to the Internet, then you’ll wind up getting locked out of the game. What if you are travelling to another country and refuse to pay roaming charges while, say, waiting for a connecting flight?

Of course, some might argue that DRM is preventing piracy… which, in its entire history, it never has. To this day, we still hear about so-called “uncrackable” DRM being cracked before the games hit the digital shelves. It does nothing to help boost sales. The only thing DRM has a reputation of doing successfully is worsening the customer experience.

A fantastic example of this is back in 2010 when Ubisoft released Assassin’s Creed 2. The game wound up being encoded with the notorious “always on” DRM. Within 24 hours of release, the game’s DRM was cracked. Then, to add insult to injury, the servers responsible for managing the DRM went down. That left Ubisoft with an embarrassing moment where the only people able to play the game were the players playing the pirated version. The DRM, especially in that situation, rewarded the pirates and punished the customers. Ultimately, Ubisoft released a patch that removed the “always on” DRM.

Either way, this is just the latest hit in a massively long history of DRM taking reputation hits. At this point in time, it’s not likely to ever improve, either.