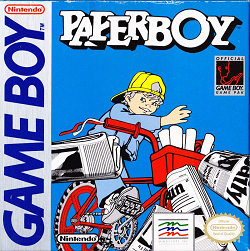 In this review, we play a game that would make WorkSafe representatives have heart attacks. That game, of course, is the Game Boy action game Paperboy.

This game was released in 1990. It is a port from an arcade game.

As a kid, you take on a job as the paperboy. You must deliver to as many houses as possible. Subscribers to the paper are rather finicky, so if you miss a house, they won’t hesitate to cancel the subscription. If you make it through a whole 7 day week, you win.

If you happen to have a perfect delivery where you manage to deliver to every house, you’ll gain a whole subscriber on the street. This, of course, is a tall order given what you put up with, but it can be done.

Part of the challenge is the fact that you are riding a bike. You can push up to go faster or push down to slow down. While you can slow down significantly, you can never totally stop.

Along the way, you’ll encounter a number of different obstacles. These obstacles include break-dancing people, autonomous lawnmowers, children on tricycles, runaway rolling tires, and skateboarders. If that weren’t enough, you also have a highway to deal with. This highway needs to be crossed to get to the second half of the street. You have to be careful because there are lots of people riding motorcycles going through here.

If you make it all the way to the end, you’ll get to a bonus section. This bonus section is called the training course. In here, you have to hit as many targets as possible for points. Hit the circular targets and recharge your stash of newspapers. Make it all the way to the end and receive bonus points for how much time you have left. If you crash, don’t sweat it. Crashing in this area will not reduce the number of lives you have left.

As you travel down the street, you may notice that you have fewer newspapers than you have subscribers. This isn’t a problem most of the time because you can collect bundles of newspapers along the way. Run over the bundle and replenish your supply completely.

Each level is named after a day of the week. You start on Monday. Complete the delivery rout without losing too many subscribers and move on to Tuesday. Complete every day of the week including Saturday and Sunday and complete the game. While a mere week may not sound like much at first, the amount of things this game throws at you makes it kind of unlikely that you’ll even make it to Sunday.

If you crash three times or fail to deliver to a sufficient number of houses, the newspaper will fire you.

As you progress further down the week, you’ll encounter an increasing number of enemies. This includes irate homemakers, parked vehicles, hurricanes, the Grim Reaper, and manhole construction workers to name a few. Suffice to say, the neighborhood gets pretty congested after a while.

In terms of delivery itself, you actually have two options: either deliver the paper to a mailbox or hit the door. You can hit both for extra points, but either or will count as a delivery. This is good news because it gives players a few more options while navigating the street.

The game limits you to three lives. If you lose them all, it is game over.

In the earlier levels, a good idea is often to stay on the sidewalk. While the sidewalk isn’t always safe, you at least avoid traffic on the street and parked vehicles. In later levels, however, it is increasingly wise to bike through peoples yards and gardens. This is because the sidewalk can get so congested, there are no real escape routs in some spots. No one area is perfectly safe, but it is something to keep in mind.

What I do like to see is the massive variety in this game for the system. The different enemies have not only different looks, but different behaviors. While they did make the game much more difficult, it really gave this game a sense of pure chaos. That seemed to be the goal of the game and the game is successful in delivering that.

Having said that, the game does get very difficult. While Monday and Tuesday isn’t so bad, by the time you get to Wednesday and Thursday, that’s when the game starts getting extremely difficult. Because the game doesn’t take long to be difficult, I would say that hurt the playability of this game somewhat.

Another problem I have with this game is the screen space itself. While it’s great to see such a level of detail in everything, so much of the space is cut off. Unless you are very close to the mail box or on the lawns, the only real way to know if you successfully delivered the newspaper is by the chime the game has. Even then, it’s difficult to know if your shots are too early or too late. Sometimes, spamming the door is the best option because you don’t know if it’s going to be a clean delivery or off by a little bit. This problem also affects your ability to even use the street as well.

The good part about this game is the fact that there is some give. If you miss a house, it isn’t the end of the world. It’s when you miss just about every house is when you run into problems. This is a feature I like because the game doesn’t demand perfection this way. It just demands that you do a sufficient job on each day. If a house is too risky to deliver to, it’s possible to skip it. So, a feature that gets a thumbs up from me.

I also like the way the bonus area works. Crashing doesn’t remove a life and all you are aiming for is a higher score. A nicely done feature as far as I’m concerned.

Generally speaking, once you get past the steep difficulty, there is a lot to appreciate in this game. The variety, the chaos, and the bonus level section all work very well for this game. It’s too bad the screen space leaves a fair bit to be desired. Otherwise, a pretty well done game.

Graphically speaking, this game is pretty impressive. The level of detail found in this game is very impressive for a handheld game of it’s time. The shading of the houses, the various lawns, the differing configurations of peoples properties, and all the commotion on the block. It’s pretty impressive. The only complaint I have with this game is the bizarre circles on the bottom corner of the screen that’s supposed to represent your lives. I don’t even know what they are supposed to be, but even know I know what they represent, they still look odd. Otherwise, the graphics are solid.

The audio is pretty well done. In terms of music, I really like the bonus area music personally. The regular level music is pretty decent, but there is only one track. So, that music can get a little repetitive after a while. The sound effects are pretty good and even help make the game more playable with the different chimes. So, pretty decent all around here.

Overall, this is a fairly solid game. While the difficulty is a little bit on the steep side and the screen space leaves a fair bit to be desired, there are plenty of positive attributes in this game as well. These positive attributes include a good variety of obstacles, a well realized bonus area, and flexibility in the subscriber system. The graphics are also pretty solid, though the free lives icon whatsits don’t quite work. The audio is pretty solid, though the regular level music can be a bit repetitive after a while. A great game all around.

Overall
Furthest point in game: Made it a few doors down on Thursday.
High score: 34,800