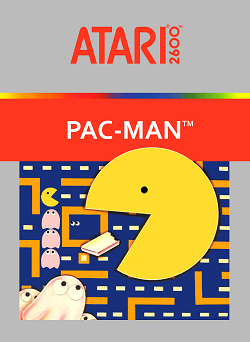 This review covers the survival game Pac Man. The Atari 2600 port was the first port from the arcade, so we thought we’d check out how this game fared.

This game was released in 1982 and would usher in a whole series of ports. We previously checked out the Atari 5200 port, so this is another port that was released in the same year, interestingly enough.

There was high anticipation for the game at the time. Since Pac Man on the arcade was so well received, a home version of this game stood to be very well received. When this game was released, it was sold as “the home version of your favorite arcade game”. This, arguably, was a massive mistake because the Atari 2600 version – especially given the limitations for the developer – would never have hoped to deliver on such a promise.

Since it was being sold as an arcade version of the original, I would say that it looked nothing like the original Pac Man. The resemblances was that there was a Pac Man-like character and 4 ghosts. The objective was to eat the pellets, but if you ate a power pellet, you had a chance to eat the ghosts for bonus points. All of this was placed into a maze. That’s really where the resemblances end.

Instead of pellets, though, you had wafers. There wasn’t really fruit as there was an edible box. The ghosts flickered as a workaround to the technical limitations of the game, but it still detracted from the playability.

The maze layout showed merely a passing resemblance to the original arcade game.

Graphically, this game was brutally bad. Even with limited pixels, a better job could have been done on this game. The maze walls were brown and the background was blue. The ghosts changed color to reflect if you ate a power pellet, but it was sometimes difficult to tell if you still had a chance to eat them or not. So, this was a massive bomb on the graphics side.

The audio was also a small disaster. There was sound to indicate, part of the time, that you had power pellet power, but that was it. The sound of eating regular pellets was rather dull and lifeless after a while. The music at the beginning of each level was this bizarre set of notes that was nothing like the original Pac Man game.

Overall, the only charm found in this game was the challenge it presented in strategically working your way through the maze avoiding the ghosts which grew faster and faster with each passing level. If it wasn’t sold as a home version of the arcade game, I would say the game play was at least decent, but because of the marketing, I would say this game was a flop. The graphics were terrible. The audio had little memorable about it. Unless you were in this game for a small challenge, there was hardly anything to praise in this game. So, I would say this game should be avoided if you are looking for the arcade experience.