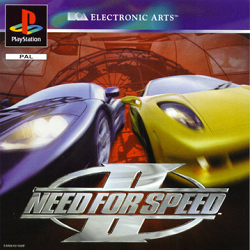 In this review, we try and claim the checkered flag in the racing game Need for Speed II. We find out if this Playstation game is worth replaying.

This game was released in 1997 and is the sequel to the game Road & Track Presents – The Need for Speed. That game got an OK review, so we were interested in seeing if this game improves on anything.

There are three main modes in this game: Single Race, Championship, and Knockout.

Single race is exactly what it says on the tin. You pick a race, pick your opponent skill level, roughly how many opponents, the track, number of laps, your car, then go.

Championship works a lot like the prequel, only you actually have to race the tracks in order instead of being able to select the track in question. You have to win every race to beat this mode. If you fail to do so, you’ll get put back on the same track you failed to win on and attempt to win the race again. Each race has a total of 4 laps.

Knockout is a new and rather unique mode of racing. It operates a lot like Championship, only the goal is to not finish in dead last. You start the championship with the full grid of 8 cars. Whoever finishes last is eliminated. If you survive, you get to go onto the next round. If at any time you finish last, you get eliminated and you have to start all over again. If you win in the final race, you win this mode.

While there is a nice variety of cars in this game this time around, there are only 7 tracks. 6 of these tracks are available immediately while the 7th track is unlocked by beating either Championship mode or Knockout mode (some sources say you need to beat both, but I couldn’t beat championship mode and still managed to unlock this track).

When I played this game, I actually had some good expectations for this track. I thought that tweaks would be made that would expand on what was presented in the previous game. I was disappointed. Not only was championship mode still bizarre in the fact that it’s a winner take all style of gameplay, but it was even more limited with the lack of track choice. I would have liked to see some more liberal rules like being required to get championship points to move on instead of either you win the race or you don’t. Sadly, this means that this mode took a step back. What I was interested in was knockout mode. This mode was new and had a fairly novel concept that I liked. This was probably the best mode in the game in part because it was actually easier to progress through the tracks more, but added that novel twist which got this mode to shine. A disappointment was the fact that pursuit mode was completely stripped out of this game. I was hoping for a more fleshed out pursuit mode only to find it was removed.

Probably the most annoying aspect of this game is collisions. Collisions are completely unpredictable. Sometimes, you can smash into your opponents and cause them to flip all over the place. Other times, you can plow into your opponents and all they get is nudged over a little while you flip all over the place, spinning out of control and crashing.

Another annoying bug is the ability to get your car stuck. This typically happens when you don’t happen to be going fast enough to plow through a breakable. If you get your car wedged between a breakable and the wall, your only hope is to have an opponent take out that breakable. Otherwise, you have to restart the race.

Handling is extremely sketchy. While turning around a smooth turn, you can easily get that wiggle action. If you touch the breaks, you can find yourself in a seemingly endless skid only predictable stopped when you smash into a wall. You can let off the gas and counter steer, but this only helps some of the time.

The difficulty didn’t do this game any favors. It’s basically the same problem as found in Multi-Racing Championship where very thin amounts of content is covered up by ramping up the difficulty. While the problem wasn’t as extreme as that game, this game does suffer from a lack of variety in-game. The first race, AKA Proving Grounds, was at least raceable while you got used to the handling. Unfortunately, the second race was quite difficult and requires a certain amount of skill. By the third race, you are already facing cobblestone roads, randomly narrowing roads, hairpin turns, and bumps that send your car flying into walls. No, your opponents aren’t all that forgiving either. You can easily spend about 3 hours on this game and feel like you are done with it just because of the frustration you can experience.

Another thing too is the fact that there have been plenty of other racing games that were released at around this time. Even games released in the year before this game, such as Cruis’N USA gives this game a run for its money partly because there were far more redeeming qualities to be had.

This game features little more than a single line for a race track. Some areas widen and you can form strategies for road bumps, but the exploration you can have in this game is non-existent compared to games like San Francisco Rush: Extreme Racing or even Diddy Kong Racing. I would have liked to see a few alternative routs in this game, but never really encountered any.

Graphically, this game was painful. While the unlockable race featured some impressive visuals, the textures and effects were extremely dated. The lights and colors were quite lifeless and the draw distance was worse than Turok: Dinosaur Hunter. At least Turok covered up the draw distance limitations with fog. This game left it all out there as if to say the developers gave up on that front.

The audio was only marginally better in that the music was bearable. There was, unfortunately, almost nothing memorable other than the female vocals from the Headless Horse track. Even then, that is stretching things a little. The sound effects were also quite basic.

Overall, I was hoping for a pretty decent game only to be disappointed by an extremely mediocre game. The difficulty curve and overall content was a little bit lacking. This was compounded by the even more limited number of game options. The knockout game mode was interesting, but pursuit was removed. The handling was poor, the collisions were unpredictable, the graphics were subpar, and the music wasn’t that memorable. There were a lot of games released in 1997 that were far superior to this game. My advice is to skip this game.