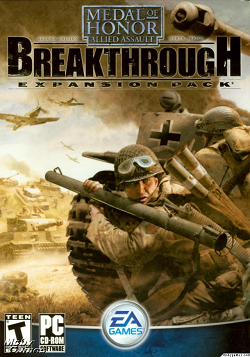 In this review, we fight to make it behind enemy lines in the PC expansion Medal of Honor – Allied Assault: Breakthrough. We find out how well this First Person Shooter game plays.

In this particular expansion, you play the character Sergent John Baker. You take on the Axis as you fight along with the Allies during world War II. The game covers three theaters of war.

the missions you take on don’t differ too wildly from the previous game and expansion. Sometimes, you are to place explosives on vehicles. Sometimes, you need to sabotage equipment. You even don a disguise and sneak aboard a vessel in yet another sabotage mission. Ultimately, you don’t actually take on any mission type that you haven’t already played in the previous expansion and original game. The only real differences comes from the environment and location themselves.

The difficulty is where the first criticism will come in. It’s not like a neat curve where you challenging increasingly difficult missions. Instead, the missions get difficult as you near the end of each one. Once you complete a mission, the difficulty does drop off as you enter the next mission. After that, the difficulty ramps up quickly again. The difficulty spikes were oddly placed.

In terms of weaponry, this game only redesigns some of the weapons that are already in the game. I don’t know if I simply didn’t notice this in previous games, but the crosshairs do disappear when you move around. I don’t remember this being in the previous expansion, but it is a sensible feature to have.

Enemy drops have seemingly changed. There are simply fewer of them. This means that ammo (and sometimes health) can run low more quickly as you work your way through the game. At one point, I found myself out of ammo. When I took out several enemies with the butt of the weapon, all I got was a canteen and no additional ammo. This puts the emphasis on making sure you don’t miss an ammo box sitting on a shelf or table previously. Otherwise, you better hope you are well-versed in the art of melon popping because headshots are the only other sure-fire way to conserve ammo.

A returning feature is the difficulty setting. Easy means you take less damage. The enemies have worse aim and see you less often. In medium, the enemies see you sooner, have better aim, and you take more damage. As you would expect, the hard difficulty means enemies have great aim, see you the earliest, and you take the most damage per hit. Small things may change, but the missions remain largely the same.

One additional criticism I have with this game was the ending left so much to be desired. All it was was a quick cutscene before the end credits. It is very anti-climactic after you worked that hard to make it through to the end only to be disappointed like that.

Generally speaking, this game doesn’t exactly break new ground. Even as far as the series is concerned, this game doesn’t break any new ground. While the anti-sniping sections are far less annoying, this might be about the only real improvement in the gameplay. In fact, some sections are confusing because you actually have to experience what looks like death at least once to complete the game. While the expanded content does add a fair bit to the game, there’s nothing really that surprising here. The difficulty is ramped up, so it isn’t very welcoming to new players. While this may satisfy people who are already fans of the series, there’s nothing much here to impress new players.

Graphically speaking, this game was decent. There’s nothing huge here as far as something being released in this year. The environments are probably the biggest shining spot, and even then, they aren’t exactly perfect. During the missions with sandstorms, for instance, dust blows through solid walls from time to time. It isn’t until you get past the transition rooms that the dust finally settles down. The explosions and debris are nicely done, though nothing to jump up and down in excitement over.

The audio is decent enough. The music starts off strong with what has been the best track in the series to date. Unfortunately, nothing ever follows it up with the same kind of wow factor. So, as far as music is concerned, this game doesn’t add anything to make it distinct in any way from the previous expansion or original game. The voice acting, meanwhile, is well done. There is plenty of dialogue to be heard in this game. This alone makes up for some of the slack left behind by the music. The other sound effects are nothing original, though. They have been heard in previous games.

Overall, this expansion will satisfy those who are already fans of the series. If you are new to the series and looking for some additional wow factor to the game, this expansion might be a bit of a disappointment. What can be said for this expansion is that it adds at least an additional day and a half worth of content to an already decent size game. Add in the Spearhead expansion and you have yourself a fairly large game with plenty to experience. It’s unfortunate that this game suffers from yet another disappointing ending. The graphics were decent, though nothing amazing. While the music was a bit disappointing, the voice acting does pick up some of the slack. Generally speaking, a not bad expansion, though nothing particularly amazing.

Overall
Furthest point in game: Defended the radio tower on easy (beat the game). Made it to the pass on Medium. Died shortly after the wire fence in the first level on hard.