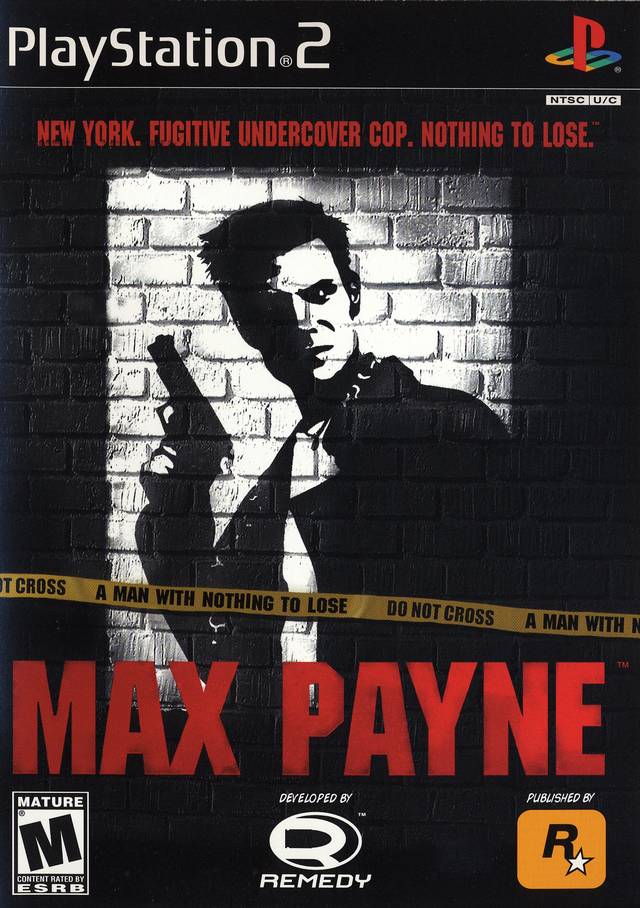 In this review, we check out another fairly well known title – Max Payne. We look into whether or not this third person shooter is a good play.

Max Payne was released in 2001 and would be a game that kicked off a franchise.

The story follows Max Payne. While the beginning of the game starts at the very end (which was a nicely creative move), the story winds back three years when “the pain started” with the murder of his wife and daughter by Valkyr V. junkies (named after a kind of individual in Norse Mythology). After, Payne transfers to the DEA where he eventually receives a tip in the case. This is the catalyst that sets off the rest of the events in the story.

The game does have some standard elements for a shooter: you collect weapons of increasing power throughout the game. You start off with a Beretta pistol and a lead pipe. An assortment of weapons can be collected including a shotgun, colt commando semi-automatic rifle, a sniper rifle, and the powerful M79 rocket launcher. Also throughout the game, you can collect grenades and Molotov cocktails which you can throw into a room full of unsuspecting mobsters. This can help clean out rooms of nasties, but the biggest use of these can be disabling laser trip bombs (well, the grenades anyway).

Weapons are also placed into nicely organized columns based on type. I thought this was a good way of organizing weapons you had on hand. A nice bonus is that if you have a weapon, but are out of ammo, you the weapon will show up in red.

Also throughout the game, you can collect pain killers. This is definitely an interesting twist on the classic health boxes/pickups typically found in older games. What’s more, you simply pick them up (maximum of 8) and use them whenever you like. While not a totally unique concept in gaming (Duke Nukem’s medical kit to name one similar concept), it was interesting that this was the sole method of replenishing some health throughout. The fact that they were painkillers instead of what you’d typically associate with health was another nice twist.

While there was no shields or body armor to pick up, players are afforded a “bullet time” meter. Some associated this slow motion movement to The Matrix, but some point out that this was already in development when the Matrix was being released. Still, elements of the Matrix were splashed into the game anyway. You can use your bullet time meter in two ways: the first was the dive dodge method which uses very little of it. Still, you can surprise some enemies with this approach with this method of attack before they get off a shot. The other method is to just use it to slow time down. This can help if you are entering areas where you know you’ll be needing fast reflexes. For this, you actually have to deactivate it if you don’t want to use all of your bullet time. The bullet time meter is gradually filled back up by taking down enemies throughout the game, though at the start of major sections, it’s filled to the top.

For me, this game has a number of strengths and weaknesses. Level design is an excellent example of both here. A strength in the level design is the use of problem solving. Whether it’s shooting a block to lower a bridge or simply ramming a door with steel, players will certainly face a number of these head scratchers throughout the game. I thought this nicely added some spice throughout the game play. The weakness in the level design was the fact that a large portion of this game is very linear. Follow a corridor, shoot bad guys in a room, follow corridor after, shoot bad guys, and, well, lather rinse repeat. There are exceptions to this where there is a room off to the side or the hot stone stepping in the Cold Steel level, but these examples seem to be few and far between. The most exploration players can expect most regularly in this game comes from the occasional switchbacks in the back due to a key being in one part of the building and a locked door earlier on in the path. Having played my share of Duke Nukem, Doom, and Turok games from years earlier, this game, for me, has a very linear feel to it.

The length of this game is half decent. Depending on how busy your day-to-day life is, you can expect this game to last roughly 2 to 3 days. So, that element gets a thumbs up from me.

One complaint I heard about this game was the nightmare sequences found in this game. To be more precise, the parts where you are following a thin trail of blood in the otherwise black settings. Someone even went so far to say that it was pure torture trying to get through these levels. I didn’t find it to be particularly bad. It did provide some challenge and thinking, but given you basically have unlimited tries to get it right, it was more of a challenging part in the game. I think I fell about 7 times between both combined, but I just learned from where I went wrong and tried something else. Not that big of a deal to me.

Another complaint I’ve heard about this game was the exploding kitchen level. While challenging, I didn’t think it was that big of a deal in terms of trial and error exercises. This was just another problem solving exercise for me. If you ask me, if you find this to be absolutely painful, try playing Act Raiser 2 for the SNES. Long story short, the kitchen level of this game is a breeze in comparison.

If you complete this game on fugitive (the only setting available in the beginning), then you can unlock New York Minute and Hard Boiled. Hard Boiled is the same game, but slightly more difficult. New York minute is a timed version of this game. You can also unlock Dead on Arrival which is supposed to be the hardest difficulty in this game.

A defining feature of this game is the the film noir style of storytelling – particularly the graphic novel elements that were put in as major portions of the cut scenes. If there was a game that employed this in particular fashion (not necessarily just the fact that art panes were used somewhere), then I’m not aware of it. So, an interesting element put into this game to say the least.

One downside of this game is the large number of places where loading was required. Sometimes, it felt like you loaded a level, then just pass through a room or two before you are greeted with a loading screen again. This did take away some of the gaming experience for me.

Another downside of this game is the fact that it often felt like you were shooting the same three mobsters over and over again. I lost count with how many mobsters I took out that wore that green cover and baseball cap. This only got worse as the game progressed as it felt like you were killing the same commando or the same killer suit over and over again. Repeating models was a drawback for this game.

Additionally, the repetitive play of shooting enemies in a room or hall did make me a little weary of this game. The only differences were typically the room layout and positioning of the enemies for a large portion of the game. The big variety was towards the end where you faced off with killer suits in the sky scraper at the end of the game. I thought these kinds of unique elements appeared too late in the game to be appreciated.

Graphics is an interesting thing to judge in this game. On the one hand, the models weren’t really anything spectacular (some blockiness is definitely seen in the characters), but on the other hand, dynamic elements were added on top of them such as the flowing coat. The textures and environments gradually got boring as the game progressed. That faded look on everything made the game feel like a bit of a blur. There was more visual appeal in Perfect Dark and Goldeneye 007 on that front. The effects such as fire and explosions weren’t bad. The environment of the snowy blizzard was also not bad, but also ended up being a one trick pony. So, I would say that the graphics were quite average in this game.

The audio also had strengths and weaknesses. Music was just sprinkled in like Tomb Raider, though I think this game had a bit more music. The music wasn’t bad. The sound effects had both hits and misses. The general sound effects like the sirens, random televisions and radios, and gun shots were nicely done. The miss in this department was that it sounded like every enemy had one voice actor for getting killed. Still, the conversations you hear in the next room were surprisingly well done in light of this. The voice acting in the cutscenes were very nicely done.

Overall, this game is definitely a tail of strengths and weaknesses. The puzzles were interesting, but the linear play detracted from this game. This game had repetitive weapons fire areas throughout, but it did have an interesting weapons select feature. The voice acting was nicely done, but it sounded like I was constantly killing the same person over and over again. The models were blocky, but they had dynamic elements added to them. The special effects were nicely done, but the textures became a boring blur after a while. In the end, I thought it was a decent game to play through the first time, but it’s not something I would be very motivated to play again. So, a not bad game all around, but not something I can get too excited over.

Furthest point in game: Knocked down the mast before the helicopter got away (beat the game) on fugitive. Got to the first bar shootout on Hard Boiled, but didn’t really feel like playing the rest of the game after that.