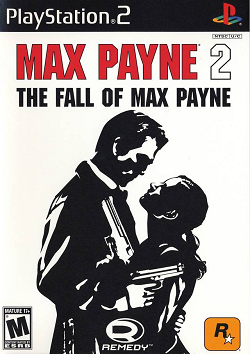 In this review, time slows down, weapons are collected, and we pop some painkiller pills like some addict desperate to hope that a pill can cure a bullet wound to the head. Indeed, we are playing the third person shooter Max Payne 2: The Fall of Max Payne as seen o the Playstation 2.

This game was released in 2003. It would be the sequel to the game, Max Payne.

The game follows Max Payne in the events that followed the previous game. Payne rejoins the NYPD when he encounters Mona Sax. He investigates.

Another tweak is the types of missions you encounter. While dream sequences exist still, the challenge in them has been pretty much removed altogether. You do, however, occasionally take control of the character Mona Sax. You even get to see the damage of two characters at once in the “co-op” and escort missions. This, I thought, was an interesting way of changing things up, though the missions can be a bit irritating at times.

There is the re-use of level sections, but not to the degree found in Max Payne 1. Instead, you get to backtrack through a small section (with Mona repeating the same set of instructions over and over until you get to the end). One criticism I had towards the previous game was the fact that it was a very linear level design. This game does seem to improve on this marginally, but I don’t think it was enough, really. You still get a lot of following the linear path a lot of the time.

This game is definitely approachable at the beginning and does ramp up the difficulty as you make your way through the chapters. The only real downside is, because of the linear nature of the levels, there seems to only be one or two ways of beating large chunks of the game. So, this game, at times, gave me the feeling that I had to try all sorts of things until I found the method of beating certain rooms.

One thing the game does well are subtle easter eggs. I thought this does add a bit of personality to the levels themselves.

This game, like the previous game, follows the film noir atmosphere. While the finer points of the writing like the foreshadowing, symbolism, and various other literary techniques are well realized, I thought the overarching story was a bit hit and miss. When major revelations are revealed, I didn’t feel like much was clicking, but instead, I found myself shrugging and saying, “Uh, OK.” In short, I was just going with it because the major plot points were a bit messy – and not in a good way.

So, for me, this game is a bit of a good news bad news case. The good news, this game does retain a lot of the good qualities that made the previous game interesting. Some of these positive points were tweaked and it largely made the game improved (though I think it would have been nice to be able to punch in this game). The bad news is, a lot of what dragged the previous game down was also carried over into this game. This includes the linear feel of the levels and constrained problem solving situations (like, how do I defeat the enemies in the next room anyway?). It was a good game to play, but not one I see myself running back to and really wanting to play again.

Graphically, this game does improve over the previous game. I thought the characters talking animations were better. A major highlight, though, was the physics of various objects. There are plenty of objects that can wiggle, be pushed over, kicked around, or otherwise moved. This was a great thing to see in general. The effects of the dream sequences with the wavy air also worked very well. The atmospheric effects (such as the color of the air during a fire sequence in the game) were OK, but nothing huge as these effects have been around for a long time now. The fire effects were pretty good as well. Overall, I thought it was a solid effort here.

The audio was pretty good. It was interesting to hear things like rain inside a building instead of music. I thought the breaks from music worked quite well here. The sound effects worked well. In the previous game, I mentioned that there was a high amount of repetition in the enemies as you killed them, making them sound like you were simply killing the same person over and over again. There is some variation here, but not a whole lot. Now, you sound like you’re killing the same 2 or 3 enemies over and over again. The music worked well for the game. Don’t know how memorable it was, but it worked decently enough in the game itself.