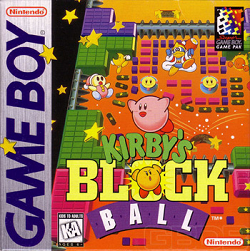 In this review, we break some blocks in the action puzzle game Kirby’s Block Ball. We find out if this Game Boy game is worth trying.

This game was released in 1996 and would be one of numerous Kirby spinoff titles released. Other Kirby spin-off games include Kirby’s Avalanche, Kirby’s Pinball Land, and Kirby’s Dream Course.

On the surface, this game looks like yet another Breakout clone. You have a paddle and Kirby is the ball. Your objective is to hit all the destructible blocks on the screen to go on to the next screen. Because of this, my expectations were quite low because I’ve played other Breakout clones and they can be quite hit and miss.

Interestingly enough, there is a lot that is different in this game than what is found in Breakout and even Arkanoid for that matter.

For one, instead of a pit where the ball can drain, there is merely a strip of spikes. Touch those spikes, and you lose a life. While that seems like a superficial difference, there can also be strips of spikes along the walls and ceiling of the field. To make matters even more complex, you can have a paddle that goes along the wall and ceiling. Left and right control the horizontal paddles while up and down control the vertical paddles. This added degree of complexity can also add quite a degree of challenge as you can easily forget that you can move the side paddles when you are first starting out.

One aspect that has been done before are the different kinds of blocks you can break apart. The white long blocks can be destroyed with one hit. Meanwhile, the light grey blocks require two hits to destroy each. One hit will turn them white and another will destroy them. This sort of thing has been done in the Windows 16-Bit game Ballistic. While that is the case, there are also large square blocks. If you hit this block (white requires a single hit while light grey requires 2 hits), then the block will break up into four tiny blocks. Each block needs to be hit to clear it out. If that weren’t enough, there are also grey blocks with the lines through them. While they are destructible with a special attack, you aren’t required to destroy them to advance to the next stage. The long thin blocks can also be rotated 90 degrees for an additional bit of complexity. To add to this, there are dark grey blocks that can only b destroyed with Kirby’s extra attack or via a special item. Finally, there are the nearly indestructible blocks that have the “x” through them (can be destroyed with a bomb).

As mentioned, Kirby has numerous abilities as he is flying around the field. The most primary ability is the normal attack. You can execute it by tapping B right when Kirby hits the paddle. If timed correctly, Kirby will grow larger and fly at the blocks at a much greater speed. If Kirby touches a spike strip while enlarged, Kirby won’t die right away (no idea if there are only so many hits Kirby can withstand before dying anyway, but this was never tested while play occurred). The benefit to this attack is that harder to destroy blocks can be destroyed in a single hit as opposed to requiring multiple hits. This includes the hard to destroy dark grey blocks. The downsides are that Kirby will have a harder time fitting in small crevices and will move faster, requiring faster reflexes.

In later levels, Kirby will also obtain extra abilities through his copy ability. If he touches certain enemies, he’ll be able to obtain special abilities that will aid the process of destroying blocks. The rock ability, for instance, will push Kirby downward through every block (except for indestructible ‘X’ blocks and dark grey blocks) toward your paddle. Fire, meanwhile, will shoot Kirby straight up with similar result. Spike can allow Kirby to stick to a paddle and re-fire anywhere at will. Spike can also destroy surrounding blocks if Kirby is close enough. These are some of the abilities you can get.

Along the way, Kirby will encounter special secrets and items to help things along. The first secret Kirby encounters is the star block. Often hidden, these blocks require multiple hits to be destroyed. To find them, Kirby has to touch the area the block is hidden under. If successful, the star block will appear. It isn’t required to beat a level, however, they can help you rack up huge points. Each hit is worth an increasingly large number of points, peaking out at 3,200 points before being destroyed.

The second secret Kirby can find is the warp star. Like the block star, you have to have Kirby pass through a special square that looks like open space. If you find the correct space, Kirby will bounce away and the warp star will appear. At that point, Kirby has only a limited amount of time to board this star. If you successfully board the secret warp star, then you gain access to the inner ring bonus levels. If you do well, you can gain a number of free lives. Even if you don’t feel you are dependent on extra free lives, they are still worth a lot of points by the end of each world.

The third special item Kirby can encounter are the stars with a circle around them. These items will turn all destructible blocks into slime blocks. These blocks will be destroyed if kirby hits them, but the difference is that Kirby will pass through the block after instead of bouncing into the opposite direction. There is a time limit to this special power-up, but if you clear out every block, you’ll get a nice sizable amount of bonus points. The faster you clear everything out, the bigger the point bonus.

In later levels, Kirby can also encounter the block switching item. All this does is turn all grey blocks into white blocks and white blocks into grey blocks. If there is an abundance of one kind of block or the other, there are advantages to be had. If you turn numerous grey blocks white, then you have an increased chance of completing the level. However, if you turn a whole bunch of white blocks grey, then you instantly have more points up for grabs in the level. Choose your strategy wisely if you can help it.

One final special item we’ll note is the bomb. Found in the later stages, the bomb is held by a particular enemy. If you defeat the enemy, then the bomb icon will appear. Collect this item and you’ll remove every indestructible block on the map, leaving you with not only just easier blocks to remove, but with far better access to those blocks in the first place.

The stages have a particular pattern to them. You first have one world available to you. For every world you complete, you’ll gain access to the next one – allowing you to advance further in the outer ring of levels. Each world has 5 stages. The first three levels are just normal levels with whatever quirks the world provides. In the fourth stage, you’ll have a special enemy that just wanders about in certain ways. You have to hit this enemy a number of times before you defeat him. Defeat the enemy, and a warp star will appear. Board the warp star to advance to the world’s boss stage. While that seems straightforward, you also have a number of star blocks you can destroy. If you destroy every star block before leaving the level, you get a free life. In addition to this, each star block you destroy offers an additional block of protection when fighting the boss.

In the 5th stage, the game will distribute the star blocks you’ve destroyed from the 4th stage along the four spike strips on this stage. These blocks will prevent Kirby from dying if you miss. Be warned, though, each star block is only capable of absorbing 1 hit. After that, Kirby can still die on that patch of spikes after. The objective in this level is to defeat the world’s boss. The energy the boss has left is located in the displayed meter. Drain the meter and defeat the boss. Defeat the boss and win in that world.

In all, there are 10 worlds. At 5 stages each along with the 4 bonus levels, there are a total of 54 stages found on the map. Beat all 10 worlds, and you earn an ending sequence.

One downside is the fact that you always start each world with only 4 free lives. No matter how many you earn, this number will always reset. The good news is that you’ll likely not need those free lives because the worlds are typically so short.

One thing is for sure, I didn’t have that high of an expectation for this game. On the surface, to me, it just looks like a bland and boring game. Once I dug into it, I was surprised by how good this game ended up being. I thought it would be difficult with such a small paddle, but this became a non-issue as the ball moves slow enough to keep things both manageable and challenging at the same time.

The added layers of complexity might sound like something that would may the game be not that great, but the game gives you both an introduction and a chance to learn how to use these additional abilities before things get too complicated. In addition to this, the difficulty curve was also very well-realized. The Kirby brand was nicely laid out over top of the Breakout game.

My only quibble with this game is that movement does, from time to time, get too quick for the hardware to keep up. This means a little blurring to make things difficult to see. Still, this doesn’t happen all that often – and does happen when things are supposed to be challenging anyway.

So, even though things get a little too quick, there is plenty to enjoy in this game. Definitely a pleasant surprise to see a game seemingly bland looking at first be so good.

Graphically, this game was pretty decent. It wasn’t super special and didn’t have a super high level of detail like some other Game Boy games at the time, but it was quite passable.

The audio was also another pleasant surprise. The music specifically was quite enjoyable. Some of the later levels really showed the musical capabilities of the system to great success. The sound effects were also nicely done as well, though many of these sound effects were already found in previous Kirby games. Still, there is some great stuff to be had here.

Overall, I wasn’t expecting a whole lot out of this game. This one turned out far better then expected. While the underlying idea of this game is quite old by this time, the changes and enhancements brought a unique twist to an old idea. It is definitely distinctly Kirby. On occasion, things move a little too quick for the hardware to keep up, and the graphics weren’t exactly amazing. Still, the audio was very enjoyable as some of the music was very well done. This game definitely gets a thumbs up from me.