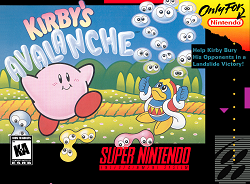 In this review, we do some color matching with Kirby’s Avalanche. We find out if this Puyo Puyo game is worth playing.

This game was released in 1995 and would be another game in an ever growing list of Kirby spin-off games. Already, we’ve played Kirby’s Dream Course and found the pool/golf hybrid game to be quite good. We also tried Kirby’s Pinball Land and found the game to be a lot better than anticipated and not a bad play. So, it was with some interest we give this game a try.

Before we continue, it is worth noting that this is actually the first time we’ve played a Puyo Puyo game. Before this game, we’ve never actually played a game like this before, so this review will be under the lens of Puyo Puyo being a new experience.

Now, the idea is that you are constantly fed 2 sticky pieces of a certain color. They can be blue, red, yellow, purple, and green to name most. You can rotate these pieces in any way, but they are all prone to gravity. If you manage to get four or more pieces of the same color to touch each other, they will clear out.

Since this game is a head-to-head competition either between you and the computer or you and another human player, there are some other rules of gameplay. If you clear out pieces, you can send “nuisance” pieces to your opponents. Likewise, they can be sent to you in the process. What these pieces are are black pieces that won’t clear out so easily. They can block your progress in many interesting ways. To clear them out, you need to line up and clear out a different color. If you clear out a set of pieces, any nuisance pieces touching that set will also disappear. Now, how much garbage you send to the other player depends on how many pieces you clear out in a move. If you clear out, say, 5 pieces, then you’ll likely only send one or two nuisance pieces over to fall onto random columns. If you form a combo where you clear out two colors at the same time, you could potentially send a whole row over. The same can be said for gravity combo’s. The idea is that you clear out one set of pieces. Once those pieces clear out, then the falling pieces will line up with others to form an additional combo. The bigger the combo, the more rows you send over to your opponent. These gravity combo’s also cause a simple chime to go off to indicate you were successful in the process.

The first player to fill their playing field first loses, so nuisance pieces can be really problematic after a while.

To keep things spices up, the longer the match lasts, the faster the pieces fall. This helps ensure that, sooner or later, someone is going to lose.

If you happen to lose, then you can use one of your continues. However, the costs of using a continue is all of your points.

Players can choose from three difficulty settings at the beginning. There is the training mode which features 3 rounds – two of which are particularly easy so you can get your barrings. The medium difficulty is seemingly the regular story mode starting on stage 1. Hard mode, however, starts you on stage 4 of story mode. We never got far enough to find out if normal mode has a cap at which level you end at or not.

One thing that I really disliked about this game is the way the story was written. Now, I know puzzle games are a hard genre to write stories for, but there is a lot of dialogue for a Kirby game. To make this element particularly frown worthy for me was the fact that Kirby really comes off as a villain as he goes along. He steps on tree roots on purpose, annoys other characters, and even outright insults them unprovoked along the way in the regular story mode. The combative nature isn’t such a big deal in the practice mode because the other characters are legitimately challenging Kirby, but Kirby ends up bullying many characters in the regular story mode. This really didn’t suit Kirby well because other games portray Kirby as an actual hero. Kirby stops the theft of food across dreamland in some cases while in other games, he saves Dreamland from being overtaken by nightmares. Never thought the writing of the story could be bad enough to hamper gameplay, but in this case, it really kills the motivation to help Kirby challenge King Dedede.

Another element that I wasn’t particularly fond of was the fact that the difficulty curve was a bit steep. The first two training levels were OK, but the difficulty really ramped up on the third stage. In the story mode, things became rather difficult by stage 3. While I can see this as being not such a big deal for players with experience in these game already, it can be really off-putting to new players in my view (myself being one of those players).

One thing is for sure, it takes a bit to get into this game. Formulating strategies on when is a good time to try for combos as opposed to just focusing on clearing out pieces already on screen can be a bit tricky. Both strategies have merit, but neither seem to be something one can solely execute because both strategies are seemingly required at some point or another.

Generally speaking, this kind of puzzle game may not be something I was able to get into as much as other games. There is certainly is challenge in this kind of game, but not something I am particularly motivated to keep going back to.

Graphically speaking, this game was nothing too special. There’s not a whole lot in terms of special effects and the graphics of the various characters is fairly par for the course for games in this era. he graphics covered the basics, though. It would have been nicer to see more variety in the backgrounds as you moved along though.

In terms of audio, the music can get a little repetitive after a while. The music itself wasn’t that bad, but there probably needed to be more to help keep things fresh. The sound effects were certainly pretty good. The use of voice samples throughout the game was nice to hear.

Overall, this was a decent game to play. There isn’t a whole lot of “wow” factor to be had here, but if you’ve never played a Puyo Puyo game before, this can serve as a way to change things up a bit in the puzzle category if you need a change. The story and writing left a lot to be desired here from what I’ve seen. the difficulty curve wasn’t entirely well thought out, though. The graphics and music was OK, but can get a little repetitive after a while. So, goo if you want to play something a little different, but nothing too special here.