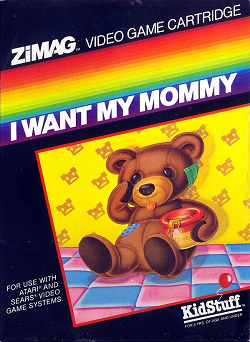 In this review, we experience the nightmare world of Teddy as we play the survival game I Want My Mommy. We give this Atari 2600 game a whirl.

The game bears some resemblance to the game Donkey Kong, but you can’t jump in this game. Instead, you have to activate the little lines (supposedly some sort of stardust teleporters) to make it up to the next level. You have to avoid the monsters on the way up to survive.

One weird quirk is the fact tat you have to activate every single “teleporter” before you can get to the very top. Not sure why.

There are two levels: The first level is, I guess, the easy level. It’s possible to avoid monsters by climbing to the top of the line while the monster harmlessly passes by underneath. Your goal is to reach the apple with the black worm at the top. The second level is more difficult as you cannot just sit at the top of the line and wait for the monster to pass through because the monsters on this level can reach you no matter how high you go. The goal is to reach the weird object at the top (supposedly a teddy bear). If you reach the bear, you win the game.

One little bonus you can get is the little square that floats throughout the level from time to time. If you manage to collect it (the game is a bit buggy on whether or not you touched this), then you obtain temporary invulnerability. This is especially helpful on the second level because the monsters have a tendency to box you into a corner part way up.

Supposedly, this game is meant for children to play. This really puts this game into some sort of perspective because I thought the difficulty – particularly the second level, was not actually well suited for children.

One serious criticism of this game I have is the fact that the game is way too short. Two levels means it’s possible to complete the game in an hour or less. Because of this, this game has very limited content. To make matters worse, I’m not sure how much replay value this game has because about 20 minutes of play for me was more than enough.

The graphics were rather average for the era. They weren’t terrible, but they weren’t anything to jump up and down about. Unfortunately, because of the limited content, the graphics suffer a bit because there was so little to see in the first place. As a result, this doesn’t quite make the grade.

The audio was half decent though. The pitch changes in the walking on each level was not bad and the sound effects of climbing the lines worked quite well. The music at the beginning was decent, but you had to sit through the whole jingle before you could even play. This did hurt the game quality a little.

Overall, this game seriously suffers from being way too short. Two levels is just not enough for a game. The harder level makes me wonder just how well suited this game is for young children. As a result of how short this game is, everything suffered including the replay value and graphics. While the graphics themselves were average, the shortness impacted the scoring I’m giving this game. The only real bright spot may have been the audio. The walking sounds having a pitch difference based on the level worked quite well and the sound effects while climbing the lines was pretty well done. The music was OK, but the game forced you to sit through the whole thing before you could even begin. After about 15 minutes of play, this game becomes easily forgettable.

Furthest point in game: Beat the game at 5890