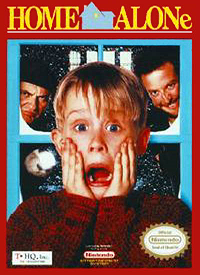 Home Alone. This is another game based off of a popular movie by the same name. We take a look at the platform NES version of this game.

Released in 1991, Home Alone is a game based off the movie Home Alone. Another iteration of this game was released on the Super Nintendo just two months later.

The game focuses around Kevin who must outwit Harry and Marve. Laid around the house are various traps you can use at your disposal. You can pick up up to three traps at a time. Setting them down “sets” the trap. If either Harry or Marve walks across them, they will collapse and have stars swirling over their heads. You can hide in various places throughout the house by pushing up. It’s still possible to get captured, but the two burglars can just run past you in their search to capture you.

The objective is to keep the two busy for 20 minutes. If you survive the 20 minutes, the cops will arrive and arrest the two burglars. The trick is to not get yourself cornered without traps on hand. Sometimes, you can set a trap right before one of the bad guys catches you. From their, you can try and make your escape, but it takes a certain degree of skill to survive the full 20 minutes.

The reason why it takes a certain degree of skill is because, after a while, your traps will disappear one by one after using them the maximum number of times you are allotted for that particular trap. In my two attempts that brought the game up to the last two minutes, I had about four or five traps left that I could use. With those traps, some of them only incapacitated one of the bad guys for about 2 seconds rather than the usual 5 or 10 seconds. Basically, enough to give you a head start, but that’s about it.

The one thing I found annoying about this game is that if you survived for 15 minutes, but get caught, you have to start over and spend another 15 minutes just to get back to the point where you were before. I also found that it got harder and harder to evade the burglars as I got to the end. I would say that using the hiding spaces might be essential in this game even if it’s a gamble that the burglars will still find you anyway. You have to judge when it’s a good time to bolt after as you figure out where in the map is a safe place to run to.

Another annoying part of this game is the fact that there was hardly an ending to be had. It was just a picture of the police arresting the criminals and Kevin doing a fist pump in the window. You then get a chance to see your score and where the remaining traps were (what you get when pressing start in the middle of the game). You then go back to the start screen again.

Also, some parts of the game were a bit buggy. Going up and down stairs takes some skill. You have to find the right part to press diagonally down before you could actually travel down the stairs. You sometimes can’t drop the chandeliers from the floor above. Instead, you actually have to go back and forth on it to find the sweet spot that will drop the chandeliers. In addition, you can’t hide and pause at the same time. Something in the game won’t permit you to do that. I don’t know why personally.

The graphics were passable. They weren’t anything special for a NES game at that time. They were passable, but not a whole lot more. The ending image wasn’t that great and the intro screen image was decent, but that’s about it.

The music was placed well. The music changes depending on what part of the map you were (i.e. basement or tree fort). Beyond that, though, the music was kind of generic to me. There were a few sound effects, but there was nothing much to them either. I thought there could have been more put in like when you climb the drain on the left side of the house. Nothing much, just little sounds thrown in that indicates you are climbing on something. The few that are were decent, but more could have been used.

Overall, the game was an OK way to kill a few hours to see if you can survive the 20 minute time limit. Beyond that, there wasn’t a whole lot of depth to go on here. So, it was only just barely above mediocre.

Furthest point in game: Managed to survive the full 20 minutes once, but typically got caught with about 1 to 4 minutes left on the clock.