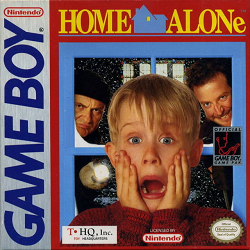 In this review, we don’t get scared now with the action game Home Alone. We find out how this Game Boy version plays.

You have to evade the wet bandits as you collect valuables in the house. Sometimes, the bandits will be able to steal some, but even if one valuable is stolen, the level is typically still more than possible to complete.

In total, you have three hits of life. If you lose all three of those hits, you become “caught” and you lose one of your three lives. Deplete your lives, and it’s game over (no continues). The upshot to the life system is the fact that it’s possible to replenish what you’ve lost. This is through the collection of pizza. You can collect the pizzas one slice at a time (8 slices will complete the pizza). Sometimes, you’ll get lucky and obtain a whole pizza to get an extra dot of life.

As you navigate around the house, you must check cupboards, wall hangings, and everything in between by pushing up. You’ll either find a weapon, a valuable, or a slice of pizza if there’s anything at all. Sometimes, objects are found on high shelves and only require a mere jump to collect.

In this game, you are always armed with a squirt gun. This can stun some bandits, but never fully incapacitate any. Naturally, you have an unlimited supply of ammo for this weapon. You can toggle to other weapons you’ve collect including slingshots and baseballs. These weapons have the ability to eventually incapacitate a bandit, but often requires a large amount of ammo to do so.

Alternatively, you can incapacitate a bandit by luring them to a trap that you can either trigger or allow the bandit to run into. This typically knocks out the bandit instantly.

If you’ve dropped off the required number of valuables, you are then required to run to the bottom floor where a key will magically appear next to the locked door. Collect the key and enter the door to take on the boss level.

A boss level is typically an obstacle course which ends with the boss. In the first level, it’s a spider that you take out by dropping loose wall bricks onto it. If you defeat the boss, you can run to the vault, throw all the valuables into it and lock it. This allows you to challenge the next level.

What really drug down the game before was the fact that this game was such a strange departure from the actual movie. It gets to the point where this game has little to do with the movie. While the SNES version was particularly bad, there is one point to be made that saves this game a little. The game was crammed into a simple Game Boy cartridge quite successfully. Even with the limited space, there’s still plenty of gameplay to be had in this version. That’s not to say that this was a particularly amazing game, but it is a positive element to consider here.

Graphically, this game was decent. It had a change in environments between levels and had plenty of different pieces of art. While some of the art wasn’t anything to be amazed at, there was a definite variety to be had here. I did think the cut-scene images were half decent though.

The music was, well, OK. Nothing memorable here. The sound effects were good though.

Overall, this version was not as bad as the SNES version. This is mostly from a technological perspective. Game-wise, for a Game Boy game, there are better and worse games out there. This game has little to do with the movie and ends up being just some strange platforming action game. The graphics were OK, but the audio was not exactly memorable. So, this game may be interesting to play a couple of times, but you can find yourself quickly moving on after.

Furthest point in game: Dumped all items in the second level, but got caught on the way to the basement. High score: 62,500 points.