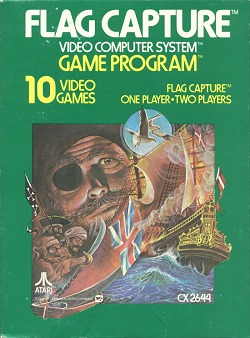 In this review, we find ourselves turning over every square to find the flag in Flag Capture. We find out what this Atari 2600 game is all about.

The objective of the game is pretty straight forward – find the flag before your opponent. First to 15 flag captures wins.

You find yourself in a grid of squares. You hit the button to either turn up a clue, random number, the flag, or a bomb. If you uncover a clue, it’s namely an arrow that may or may not point to the flag. Other times, you may uncover a number. What that number indicates, well, I’m not exactly sure. Sometimes, you’ll uncover what appears to be a question mark (or is that a 7?). I figured the number was number of squares away the flag is, but even if it is, I’m not entirely sure how helpful it was because I sometimes go that many squares away and get hit by a bomb instead.

If you are unlucky enough to uncover a bomb, you’ll get blasted back to the starting square to try again. If you find the flag, you score a point and the board seemingly resets and becomes slightly more difficult.

Generally speaking, this game quickly becomes little more than a guesswork game rather than an actual strategy game. Sometimes, you might as well just randomly guess at the squares and hope you don’t get the bomb right away. The only way I know that 15 “flag captures” are the goal is the fact that the game freezes after that.

Graphically, this game was OK for a game of its time. Still, there’s hardly anything to it. I was hoping the background color might change from time to time. Unfortunately, it stays the same blue which makes the game become bland after a few plays.

There’s hardly any audio. There’s the movement sound, the bomb sound, a capture sound, and a clue sound. There’s no music. As a result, while the sound effects does what they can, the game has that sense of “blah” to it.

Overall, this game is less about strategy and more about hitting a lucky break. While there are clues, they aren’t always clearly leading you to success. As a result, this game only builds up a small amount of suspense before finding out whether or not you hit it big with the flag or just get a bomb tile. Because of this, this game gets old after a few plays. If you’ve never played this game, you didn’t miss much.