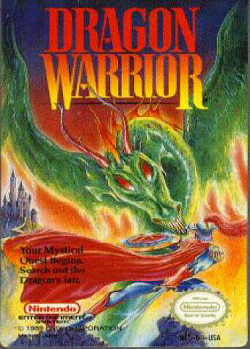 In this review, we rescue damsels in distress in the RPG game Dragon Warrior. We find out if this NES game is worth replaying.

It’s a fairly typical fantasy storyline. You are a warrior and you are quested by King Lorik to rescue Princess Gwaelin. Princess Gwaelin has been kidnapped by the games antagonist, the Dragon Lord. Being in love with Princess Gwaelin, you agree to the quest (well, should) and set off to find her.

This game features one on one combat. You are alone throughout the entire game. While that sounds quite limiting, you also fight monsters one at a time as well. So, in terms of numbers, the game is a bit more fair in that respect.

Like many RPG games that have since been released, you battle enemies to gain both gold and experience points. If you earn enough experience points, you’ll gain levels. For every level you gain, you can go up in maximum health, strength, maximum magic points, and agility. You will even occasionally learn new spells along the way as an added bonus for leveling up. While you won’t always gain in every stat at absolutely every level, every level you gain is absolutely crucial in this game.

While you initially start off with in a castle, there is a nearby town. In towns, you can stay at inns to replenish your health and magic points. You can also buy weapons, armor, and items. Shops tend to be broken down into two kinds: tools and weapons. In weapons shops, you can buy your armor and weapons while tools shops sell various items like health replenishing herbs and torches.

The game’s balance is actually leaning against you pretty much throughout the entire game. As a result, grinding is pretty much a requirement here. The game does give you a chance with moderately difficult enemies on the world map, cheap lodging, and the nearby save point. Unfortunately, after that, you are on your own. Once you venture out of that small area you start out with, you’ll quickly realize that the difficulty spikes by a lot to the point where if you didn’t find yourself grinding up a couple of levels, chances are, you’ll never survive the first encounter with a more powerful enemy. As a gamer, I was a bit understanding of this because it can drive home the point that grinding will make the game easier as you go on. Sadly, the whole game is pretty much like this. You spend hours grinding in one area and you end up finding that this only served to make your encounters with the enemies in the next area merely survivable. This really killed a lot of the enjoyment out of this game. In fact, it pretty much obliterated the replay value of this game as far as I was concerned. It got to the point that, part way through the game, I just wanted to set the controller down and just say “enough”, but lucky for this game, I gave it another chance and was successful in making it to that next town I was, at the time, seeking.

The menu system was a bit painful to work with. You had six options that included “door”, “stairs”, “spell”, and “item”. Some of those options are understandable, but I figure the “stairs” and “door” options were overkill. Since “B” is barely used, I would have thought just relegating the operation of doors and stairs to the “B” button would have been better. In that respect, the menu system was a bit clunky. However, the way this game handles spells and items wasn’t that bad at all. As far as I’m concerned, there is some give and take on this system.

There is an overarching story throughout the game, but I did find that some objectives were a bit vague. The problem does seem like not such a bad thing, but when you compound the problem by having a rather open world concept in this game, it makes it more than possible to get lost in this game (and, of course, easily die because you wandered in an area at level 3 when it was designed for you to be at level 7). As a result, a guide is almost essential unless you are really into trial and error.

If you die, you’ll resurrect at the first castle where you last saved. Your gold is cut in half, so there are consequences to dying in this game.

There are dungeons in this game. Sadly, there are about a half a dozen dungeons (or less?) to explore. A lot of these dungeons also have a very small board. While the darkness helps make the dungeons confusing, a radiant spell will quickly reveal that you could spend about 5 minutes figuring out the dungeons before you can just walk over, grab what you are after, then leave. The only time the dungeons really got interesting was in the final dungeon with the endless corridors. In fact, the only time there’s a decent amount of content in this game is wandering in the overworld. Even then, it does have a sense of being limited after a while. The only reason this game takes several hours to play is because of the seemingly endless grinding required. If it weren’t for the grinding, this game might take all of 2 or 3 hours tops. Because of that, the gameplay has that sense of artificial inflation.

Another annoyance I have with this game is that some things get a little wordy. One prime example of this is how much text is seemingly required to tell you that you’ve leveled up. It’s one thing to offer praise on a level or two, but to offer it on every single level up is a bit much to me.

Generally speaking, I can see the potential in a game like this. The basic ideas of a great RPG game are there. Unfortunately, the pros fail to outweigh the cons for me in this game.

Graphically speaking, this game was OK. It wasn’t spectacular like Mega Man 2, nor was it terribly repetitive like the Adventures of Lolo, but it wasn’t bad. The variations in the land such as mountains, grass, desert, and swamp worked to this games advantage quite well. On the other hand, a vast majority of dungeons are nothing more than brick floor, stone wall, stairs, and treasure chests. The sprites were quite anti-climactic in the dungeons to say the least. There was some variation in the enemy encounters, but there is a certain amount of retexturing going on.

The sound effects were decent enough for a console game of its time. The damage, the strikes, the running into walls, and text were all decent enough. Unfortunately, the music falls flat after you have heard the castle music and the overworld music. Even the better music wasn’t all that memorable to me. So, a the game is a little flat as far as audio was concerned.

Overall, given that this game sparked a major series, it’s a bit surprising that this first entry wasn’t the greatest game at the time. It had its merits and it had a few great ideas such as the open world concept and the menu system. Unfortunately, the cons do outweigh the pros with its painful grinding just to survive, wordy messages, and occasionally unclear objectives. This series, for me, is still worth playing, but I don’t think I’m off to the greatest starts here. Especially considering the time commitment, I would say this game could be given a pass.

Overall
Furthest point in game: Defeated the DragonLord at level 25.