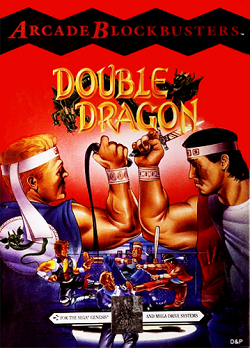 In this review, we try and save the girlfriend in the Sega Genesis game Double Dragon. We find out if this beat ’em up game is worth playing.

This game was released in 1993. This is the third version of this game we’ve played. We previously played the NES version. That game got a barely passable score. Next up, we played the Atari 7800 version. That version just didn’t make the grade. So, we thought we would try this version to see if it is any better.

Because this version is so similar to that of the NES version, we thought we’d focus this review on the differences this game features.

One of the bigger differences we’ve noticed is that the game rearranges the levels somewhat. There is no indoor area in the first level. Instead, you fight near a conveyor belt on the outside. The second level features a whole bunch of elevated areas that you must navigate over. It also eliminates the pits from that zone. The third level is a little bit more like the NES version including the docks you must jump off of to pass over a small body of water.

Another difference is that you, as the player, control the number of lives you have as well as the credits. In the options menu, you can choose between 2, 4, or 6 lives. This, of course, affects the difficulty of the game in general, so the more you give yourself, the more chances you have to get further into the game.

Additionally, spawning is significantly improved in this game. If you die, you simply reappear where you died instead of respawning at a designated checkpoint. This also eases gameplay difficulty over the previous NES version. Even using a credit allows you to respawn where you died. The only exception is if you fall into a pit or drown. In that case, you respawn near that danger.

Enemy health is a bit more all over the map than the NES version. Some enemies have just as much, or even more health. These enemies start appearing on the bridge in the third level. Other enemies, however, have about the same amount of health as the NES counterpart. A few enemies, like the bosses, will obviously have more health. THe bosses will also reappear as regular enemies like last time.

A noted improvement is the ability to keep items. In the NES version, once a particular fight is ove, you lose the weapon you are carrying (if any). In this version, weapons can be carried for a large portion of the journey to the far right side of the screen.

While this all sounds like this games difficulty has been dialed back substantially, there is one big caveat here. The controls. The controls don’t take much to understand. A is kick, B is jump, and C is punch. In fact, the layout is much easier then that of the NES counterpart. The problem here is the responsiveness. You may find yourself mashing the punch or kick button only to have your character stand there and eventually take a punch or kick by an enemy. I’ve tried slower taps, longer taps, or frantic taps. The only thing that increases the responsiveness is moving in the direction of the enemy at the same time. I’m not sure why that increases the responsiveness, but it ultimately does to some degree.

Another pitfall in this game is that your attacks have greatly reduced range. Only a handful of weapons retain the range found in the NES version, but even then, some of them have been greatly scaled back. The chain, for instance, has less range than a punch. While kicks seem to be the most effective form of attack, the kicks are high. Therefore, you need to really focus in on your position relative to your enemy in order to be effective (or really good at timing).

Probably the biggest pitfall of all, however, is the games overall bugs. Specifically, if an enemy falls off of a ledge you are supposed to jump down to after you win the fight, the game is pretty much over. Your only option is to jump down to the ledge and instantly die over and over again and forgo that next credit. This screeching halt moment, combined with the thought of fighting with the controls more, was enough for me to just put the controller down and power down the system.

So, while the changes are interesting and gameplay has improved in a lot of fronts, the game does suffer from a couple of severe setbacks. This includes bugged enemies, unresponsive controls, and more limited range. The control you have over how many lives and credits you get is interesting. The ability to carry weapons further is also a marked improvement. Still, the problems really do overshadow what is good in the game.

Of the three versions of this game, this game is easily the best graphically speaking. All the annoying flickering is gone. The characters never looked better. The intro screens are certainly the prettiest. Even the level graphics are in top form here.

The only thing to keep in mind is that this game was released in 1993. This is 5 years after the NES version and 4 years after the Atari 7800 version. So, after all that time and added power, it really ought to be improved over the previous versions. The question is, does it compete well with games released at the time? Well, games that were released at the time include Super Mario Kart, Sonic the Hedgehog 2, and The Legend of Zelda – A Link to the Past. While this game may not really compete well against the top form games at the time, it isn’t all that bad either. So, a pretty decent all around effort,

The audio did suffer a little when making its way onto this system. While the music is OK, it wasn’t the best in the world. The sound effects, however, were what really did the game the fewest favours. There were much better efforts in this department at the time. Still, it could be worse too.

Overall, this version of this game features a number of improvements. This includes weapon handling, an interesting method of handling difficulty, and respawning. Two big pitfalls are enemy AI bugs and control responsiveness. The graphics are certainly pretty decent for the time. If you want the best showing for graphics out of the three systems we’ve seen, this, by far, works the best. The audio, unfortunately, didn’t see a major face lift as well. It was OK, but nothing huge. An interesting effort, but some elements really spoil the fun.

Score
Furthest point in game: Made it to the end of the bridge while assaulting the base, but one enemy falling down killed play instantly. I didn’t feel like going through the entire game again just to try and avoid a similar fate.
High score: 58870.