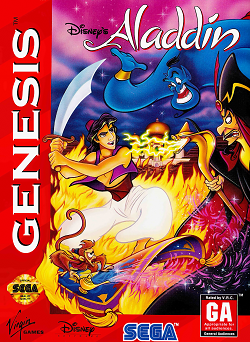 In this review, we throw some apples in the Sega Genesis game Disney’s Aladdin. We find out if this action adventure game is worth playing.

This game was released in 1993. We previously reviewed the Game Boy version and found it to be a rather average play.

Since this game is so similar to the Game Boy version, we thought we’d focus on the differences of this game.

One interesting difference is the fact that there is an additional level. This level is inside the Genie’s lamp. I don’t recall this being in the Game Boy version, but every other level is certainly similar to that of the Game Boy version. So, there’s a little bit more content to be had here.

The cinematic animations vs playability issue is less pronounced here. As a result, controls are definitely more responsive.

Unfortunately, length is still an issue. Even with the additional level, you can still play through it easily through the course of an afternoon without too much of a problem. So, it’s still a pretty short game.

So, generally speaking, this game is better than the Game Boy version in a few small ways. So that’s always nice.

The graphics was a sore spot for the Game Boy version. In this game, it is much less of an issue. For one, there is no flickering or disappearing items. For another, colour contrasts practically disappear thanks to this game not being grey scale. The thing to keep in mind is that this game also has the luxury of not being a handheld game. Not only this, but the game has the graphical power of the Sega Genesis behind it. So, the expectations are going to be higher as well. On that front, the games graphics are pretty decent overall.

The audio is alright. While it does carry the main theme alright, a lot of the music is quite forgettable. It breaks up any awkward silence, but that is it. The strength, however, is in the sound effects and voice samples. That added a fair bit to the overall gameplay.

Overall, this is an alright game. It is definitely an improvement over the Game Boy version which suffered from a number of flaws. In this version, some of those flaws are minimized. Unfortunately, it still suffers from length issues as well as an anti-climactic ending. The graphics are alright, but the audio is a bit lacking. A decent game if you ask me.