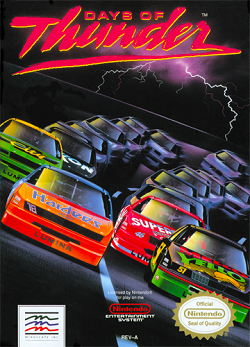 In this review, we check out the NES racing game Days of Thunder. We find out if this game based on a movie is worth trying.

You play the race car driver Cole Trickle and you enter the Daytona stock car racing championship. You only have one car and you must race up against strong opponents in your quest for glory.

you race each track twice. You first race by yourself in the qualifying round. The faster you go in this round, the higher your position is out of the gate in the actual race. The actual races consist of more laps and you have what appears to be 7 other racers on the course. There’s supposed to be 13, but I’ve never finished any further back than 8th when I was able to finish.

You have several indicators for the status of your car. There is the fuel gauge that tells you how much fuel you have left. The other indicators are given in the car diagram. As you take damage, certain parts of your car go from green to yellow to pink to finally red. Your tires gradually wear down regardless of how you race, but the engine will get damaged from collisions. As that takes damage, you’ll be able to drive at gradually slower rates. If you run out of fuel, your race is instantly over.

Inevitably, you’ll have to turn into the pit stop at some point during the race. The pits are indicated by the “pits” words along the side of the road. You have to slow down enough before entering the pits or else you’ll simply fly completely through and get kicked back onto the race track. If you do manage to make it around again and successfully pit, you’ll get control of your pit crew. The flashing crewman is the currently selected crewman. You can toggle between crewmen with “B” and “A” is your action button. To change tires, one crewman has to lift the one side of the car while another gets to change the tires. To fix the engine, the right side of the car has to be lifted and the crewman with the wrench is the one that goes under the car and fixes a whole engine with a simple wrench (wow is that ever talented!). The fuel is the easiest to replenish as you just have to select the crewman with the Jerry can and simply get him to the fuel tank to fill up. Once the car is on all four tires again, you can hit Start to continue racing.

The totally fair part of the game is that all of your other opponents will also have to pit as wear and tear occurs in their vehicle. Just kidding. While you are pitted, you’ll get to see all of your opponents fly past you as your ranking gradually sinks down to 8th place. When you get back on the track, you’ll be so far behind your opponents, catching up is almost an impossible task, let alone getting a reasonable ranking. Meanwhile, your opponents don’t register any fuel loss or damage of any kind. Practically speaking, for most gamers, this means this game is pretty much impossible. Sure, at the beginning, you might be able to challenge first place for a while, but inevitably, you’ll have to pit which basically means you forfeit the race. You can’t complete any of the races without pitting because of the fuel alone as your gas mileage is non-existent.

As you inevitably lose races, you’ll get angry telegrams from your sponsors who demand that you complete a time trial race within a certain amount of time. Each time you lose the races, the times gradually get tighter and tighter until you fail to beat the clock. At the point, the game is over.

Personally, when you always lose, the game can easily become not fun. There really needs to be a lot of incentive for you to continue. In this game, the only incentive is that you are given a few more chances to continue on in spite of your “poor” performance on the race track, but once I ran out of chances, I found that there was a lack of motivation for me to continue. At that point, I threw in the towel because I found it pointless to continue on when I know that there’s nothing I can really do that would give me a chance without cheating. At that point, what is the point anyway? So, with the fatal flaw, this game is pretty much useless.

Graphically speaking, this game isn’t bad. It is a third person perspective driving game on the NES which is an achievement in and of itself. The problem is, other NES games were accomplishing graphics with similar quality. One example is Captain Skyhawk which also had pretty impressive graphics and special effects. Other games released in the same year include Skate or Die 2 – the Search for Double Trouble and Super Mario Bros 3. So, the graphics were pretty decent for a console game of this era.

The audio is an interesting thing to judge here. The music I hear was the intro/get ready to race music and the losing music. The races themselves contain no music as all you get are the general effects and the sound of your engine. The sound effects, on the other hand, range from good to impressive. There’s speech samples and various sounds the engine makes. So, overall, the sound was decent enough.

Overall, this is one of those games that is decent enough, but with a critically fatal flaw that makes it completely unplayable. That critical flaw revolves around your opponents not having to pit, rendering this game impossible for most players. As a result, I found this game to not be fun because you always lose in this game. The most you can accomplish is having a decent time trial run, and that’s it. It had decent enough graphics and the sound was not bad, but because of the fatal flaw in this game, I would say this is definitely a game to avoid.