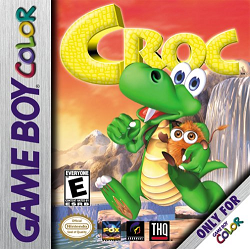 In this review, we rescue some gobbos in the Game Boy Color game Croc. We find out how well this adventure game plays.

This game was released in 2000. It is a port from the Playstation game, Croc – Legend of the Gobbos. While this is a small franchise, this is our first taste of it.

The story is that Baron Dante is wreaking havoc throughout the land of the Gobbos. It is up to you to free the Gobbos and defeat him in an effort to save the land.

Along the way, you can collect a small number of different items. The most common item is the gem. The more gems you have, the more health you have. Every hit you take deducts gems from your stash. Collect 100 of them and you’ll gain a free life. The downside is that the gems will reset to nothing, meaning you’ll be on the verge of death again.

Another item you can collect is the heart. The heart will give you a free life.

What you can also collect in the game are letters. Each level has letters that spell out “BONUS”. If you collect all of the letters, then you can unlock the golden door at the end of the level and take on the bonus challenge.

In addition, you can collect Globbo’s. In total, there are three of them in the level. A fourth Globbo can be awarded if you manage to complete the bonus challenge. If you manage to get all four Globbo’s, then a Globbo icon will appear on the level in the world map.

The final item is the key. This is used to unlock the cage somewhere in the level. These cages contain a Globbo.

Impeding your progress are a number of different enemies. Some just wander back and forth. Others will fly around or climb around. The movements are basic, but together, combined with the environment, it can be challenging to get through them from time to time.

There are other obstacles in the levels themselves. There are pits with liquids in them. The bottomless pits are also there to end you life entirely. In addition, there are switches and ski lifts to make things even more interesting.

When you get to the end of the level, there are two exits. There is the Croc gong. Hit it with your tail kick to advance to the next round. If you manage to get every BONUS letter in the level, you can skip the gong and enter the golden doors for a bonus challenge.

There are a number of bonus challenges you can take on. There is a shell game like challenge that challenges you to pick the right box. Another challenge is the slide puzzle which gives you a limited amount of time to solve it. There’s also the slot machine challenge and the catching challenge too.

The big thing that holds this game back is the controls and movement. The controls are buggy.. If you are holding down “A” still as you land, Croc will instantly jump again. This can mess things up, especially on time sensitive stepping stones.

There’s also the walking tail kick thing. If you walk forward and hold down “B”, you’ll perform an endless tail kick while moving. While this may seem like a glitch that gives the player the advantage, you can’t stop yourself mid-way through. So, if you find a pit coming up, you have to end your move early or you’ll send yourself into the pit even though you stopped holding down “B”. In addition, if you are on a moving platform that moves up or down, you’ll get stuck in mid air for a moment. this can be fatal around corners. So, pretty buggy controls that you have to compensate for.

In addition, the movement is hard to follow along. If you jump or move around, it’ll quickly be apparent that you jump up and down way too quickly. If you are on stepping stones, you have to visualize your jumps and hope for the best. Any quick movements will lead to excessively short reaction time windows. When you throw in the buggy controls on top of it all, the reaction time is pretty much gone completely. So you do have to rely on some level memorization to compensate for this again.

Having said that, the game isn’t that bad in terms of difficulty. While you do find yourself dying even though you feel you got robbed by bad controls, the game manages to spit out plenty of free lives. So, as long as you are patient and remember certain obstacles, the game is more than winnable.

In spite of this, some levels do get rather repetitive. It’s a case of collect the gems, avoid bad guys, beat the level, repeat for large chunks of the game. As a result, the game can get rather dry from time to time.

Generally speaking, bad controls and movement really hampers play in this game. These two can lead to rather frustrating moments. In spite of that, the game difficulty is pretty manageable thanks to the many lives it spits out at you. The length is about right, but the variety can be sparse at times. Not a game I found myself having a blast with, that’s for sure.

The audio in this game is a bit problematic for me. While the music itself isn’t all that bad, the repetition is pretty bad. It’s like there is all of 2 or 3 tracks playing every single level. I personally would have liked to have heard more music to keep the same tracks from playing over and over again. The sound effects aren’t anything special to me.

Overall, this game can prove rather frustrating at times. The buggy controls and movement issues hamper play by a fair bit. That doesn’t mean the game is difficult as the game does spit out plenty of free lives at you to work with, though. It’s just a game that requires some level memorization and visualization to compensate for the issues. The graphics are pretty decent, but the audio is repetitive. A very average game.