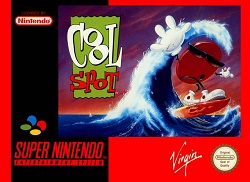 In this review, we check out a side scrolling adventure game called Cool Spot. It was one of a handful of games based off of the 7-Up mascot.

This particular game was released in 1993. This is wildly different from the NES board game Spot – The Video Game.

You start off on the beach next to an empty 7-up bottle on a sandy beach. While it isn’t immediately clear, your goal is to collect a certain number of red “spots” that are found throughout the level. Collect enough and you can free a caged spot character at the end of the level. You get a bonus if you manage to collect all 100 spots.

Along the way, you’ll encounter a number of bubbles that you can use to launch Spot up in the air. In the first level, most of the items are floating up in the air, so you’ll find yourself bouncing from bubble to bubble to collect them.

Along the way, you’ll encounter numerous enemies that you can dispatch with your main weapon – which appears to be a blast of either magic or sparkly fizz.

While you can jump quite high, jumping a certain distance will require a certain amount of running. If you need to clear a gap, you’ll need to allow spot to have a running start. You’ll also have to be careful to avoid baddies when you jump as I found that it’s quite easy to accidentally land on an enemy. Unfortunately, unlike Super Mario, you actually take damage when you land on an opponent. You can take a certain number of hits before losing a life. Your damage meter is depicted as a spot that gradually peals off of the screen as you take damage.

Another thing to note is the fact that baddies have a habit of respawning in this game, so there’s no point in attempting to defeat every opponent as some will just reappear after their initial position falls off of the screen.

After you complete a level, you get a chance to play a bonus level. This bonus level (at least, the only one I encountered while playing anyway) is a giant pop bottle filled with bubbles that allows you to make a series of jumps upwards. While spots fill this stage, the best prizes are at the top which includes extra time (huge since there is a time limit to this level), free lives, and even a letter which adds to your continues.

This game is extremely fast. All significant movement allows for extremely minimal reaction time. As a result of this, you’ll find yourself crashing into enemies all the time – sucking away at all of the free lives you have available to you. While constantly firing helps, the size of the shot is extremely limited and stops at any obstacle on the way. So, while it may help your survivability, it only helps somewhat. As a result of this, this game is actually quite difficult and frustrating to play. By the time I was finally able to complete one level, I had practically memorized every part of it just so I could avoid getting hit too many times. I got to the bonus level and got a few great items. Armed with this, I made it to the second level where not only was the problems persisting, but it was made worse by an increase in difficulty thanks partly due to more baddies requiring multiple hits before they die off. I got a fair portion of the way into the level, but after dying, I found myself asking if it was really worth it to put that much effort into memorizing the second level. When the answer ultimately became “no”, I simply put down the controller and switched off the game.

This game has less to do with skill and more to do with pure memory work. If you’re not that great with memorizing whole levels, this game will simply be one major headache. So, this isn’t that great of a game.

Graphically, this game was decent enough. It had a real 90’s arcade feel to it as the game ran smooth enough. Unfortunately, I didn’t get a chance to see much of the art due to my inability to make it to the third level, but it looked pretty good in this department from what I saw.

The audio was a decent enough highlight. The music was pretty good. I thought the sound effect of a hand clap as you collected each spot was creative because it increases in pitch when you collect a bunch in a row. Probably the best track that I was able to hear was the bonus level music. It’s someone stereotypical of the 90’s, but that didn’t really bother me that much.

Overall, this game had decent graphics and good audio, but there’s really little else that I can give praise to this game. It’s difficult and frustrating simply because you find yourself constantly crashing into baddies with very little reaction time. As a result, unless you were going to go through the trouble of memorizing each level, this game quickly becomes unplayable. There’s better games that were released in this era around, so I recommend just looking elsewhere.

Furthest point in game: Over 60 spots on level 2.