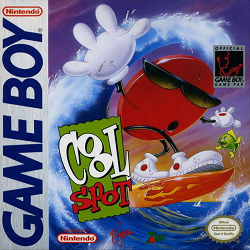 In this review, things get rather spotty in the Game Boy game Cool Spot. We find out how well this adventure game plays.

This game was released in 1994. We previously reviewed the SNES version of this game. That game just didn’t measure up at all, so we thought we’d try the Game Boy version to see if it’s any better.

Since this game is so similar to the SNES version, we thought we’d just focus on the differences.

One noticeable difference is the fact that movement has been slowed. This helps a lot in term of increasing reaction time. In the process, it dropped the difficulty of the game to the point where level memorization became less of a requirement and more of a bonus. There are obviously exceptions to this rule, but this doesn’t happen until later levels in the game.

Beyond that, there isn’t much in the way of notable differences.

The graphics are pretty decent. It’s unfortunate that the blurring becomes an issue because of the overall fast-paced nature of this game. This is after everything slowed down too. So, pretty good, but not the most amazing I’ve seen on a handheld by this time.

The audio is decent enough. Not a whole lot that’s memorable. The bonus stage music isn’t as impressive as the SNES version unfortunately. The sound effects are alright, so I’ll give this a passing grade.

Overall, this is one of those games that is surprisingly better on a much more restrictive system. The movements have been slowed down. This is likely a graphical thing given the limited refresh rate on the screen. Because of the slowing down of the movements, reaction windows are improved to the point of being reasonable. The replay value is improved as well because of this adjustment. You are less reliant of level memorization. The graphics are pretty decent, but despite the slower movements, blurring can still be an issue. The audio is decent enough. An overall half decent game.