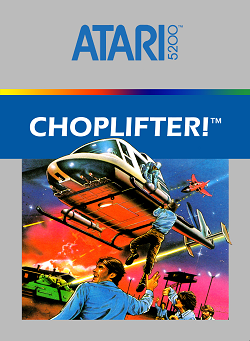 In this review, we try the Atari 5200 port of Choplifter. We find out if this action game is worth rescuing from the past.

This game was released in 1982 and would be one of many ports for this game.

The basic gist of this game is that you are a helicopter and you are on a mission to rescue what turns out to be prisoners of war (POWs). You destroy the walls of the prisons they are being held in, then lift them off to the American base.

Things get complicated when you are attacked by multiple different kinds of enemies. At first, it’s just tanks. On the next fly through, there are jets flying at you. On the third pass through, there are alien space craft flying at you trying to take you out. After that, well, I’m not sure because I used up my free lives before getting any further.

Generally speaking, I thought this game was both challenging and interesting. There was a decent difficulty curve and I was definitely motivated to try again to find new techniques for dealing with the different threats. One interesting strategy is to land the helicopter to avoid most of the attacks of those annoying jets.

Graphically speaking, this game was not bad. It was great seeing little animations of the various objects in this game. The waving POWs was a nice touch. The graphics were generally basic (a lot of blue, but the odd splash of color here and there) otherwise though. So, I would say the graphics were good, but not something to get excited over.

The audio was pretty basic. The sound effects were decent enough, but there was no music. So, average sounds for a console game at the time.

Overall, this was a decent game. It wasn’t fantastic by any stretch of the imagination, but it did provide me with a bit of temporary entertainment. Worth playing though.