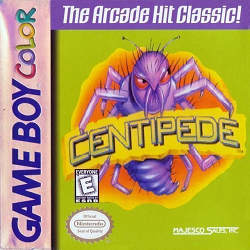 In this review, we blast some insects in the Game Boy Color game Centipede. We find out how well this survival game plays.

Since this game is a lot like the other versions, we decided to focus this review on the differences.

The game has a menu system. This allows for easier navigation for the players. Unfortunately, there is only one single player mode to play with, so this is all that we got to play. Select the mode of play with up and down while left and right selects the difficulty.

Another difference is that some of the enemies move slower. This is especially true with the spider. This allows players to more nimbly evade enemies while shooting down the centipede.

The number of points needed to gain a free player has changed. While 12,000 is needed for the first free life, it was unclear where you earn subsequent lives. Our best guess is that it is in multiples of 12,000, but we aren’t sure if that is really the case.

Beyond that, there really isn’t any differences in play than what is found in the previous ports.

Generally speaking, this is definitely an improvement over the Atari versions. That is the good news. The bad news is that the industry has moved along a lot since the Atari days. Because of this, play will ultimately seem short and limited. While this game boasts some replay value with its simplicity, this does dissipate after a few hours. Because of a lack of any real innovation outside of a few tweaks, there is really nothing in this game that sets it apart from other ports as well. Not much of a game.

The graphics are pretty plain. The gameplay itself features a stark black background. The enemies do add to the visuals and the colors mushrooms do add a small degree of eye candy. Unfortunately, the sprites are very plain and average with no shading effects or anything else. The menu is also very basic. There is nothing much visually going on in that or the Top 10 scores list. Fairly sub-par if you ask me.

Probably the biggest strength in this game can be found in the theme song. I honestly was excited for this game when I heard the intro song. Unfortunately, this is where the excitement ends because you only get treated to jingles and basic sound effects while in the game itself. The first few notes in the theme repeats for every new level you advance to. The free life jingle is pretty nice. Unfortunately, the sound effects are very average. As a result, the sound does get repetitive after a while (though the theme song in the menu does stay intact as neat to listen to).

Overall, this game does satisfy the nostalgic players who remember the Atari ports of this game (or even the arcade version). The original gameplay remains intact. Unfortunately, there is almost nothing new to be had here. There are a few tweaks to add to the user-friendliness and some enemies have been slowed down to make thins easier for newer players. Beyond that, the game is the same and, by now, outdated style. The graphics are fairly sub-par with only colored mushrooms making for some interesting visuals. The audio is only thing that contained any real strength with the theme song. After this and the free life jingle, sounds end up being very basic and repetitive. So, if you missed playing this game, you didn’t miss much.