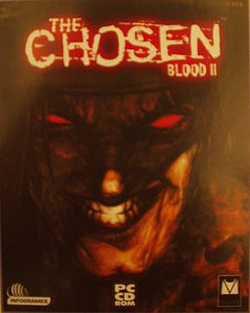 In this review, things get a little interesting as we play the FPS game Blood II – The Chosen. We find out how this sequel plays on the PC.

This game was released in 1998 and was a sequel to the original game Blood.

Once again, you play Caleb, the protagonist from the previous game. You find yourself on a train while you are having a bad day. When you are about get up to confront the conductor, you hear the voice of Gideon on the speakers. You ultimately pursue him even after he crashes the train. In the process, one of Gideon’s body guards opens a rift to kill you, but instead, it malfunctions and brings back a member of The Chosen.

The game has multiple modes. In Caleb single player mode, you have three difficulties: Genocide (easy), homicide (medium), and suicide (hard). The differences in play is that the harder the difficulty, the more health enemies have. In addition, your health is depleted more quickly as you select a more difficult setting.

A second mode is available called “The Chosen”. In this mode, you play the regular levels as one of The Chosen. This mode seems to remove all cutscenes, so you just play the levels straight through.

In addition to this is Bloodbath which is the multiplayer mode of the game, though this review focuses mainly on the Caleb single player mode.

You start off with a pistol. If you pick up a second pistol, you’ll be able to fire two pistols at the same time. The only downside is that you use twice the ammo. In the first level, your objective is to get to the front of the train. Standing in your way are a number of bodyguards mixed in with civilians. If you kill civilians in the process, it’s possible to pick up some life essences (more on items later). The only penalty for killing them seems to be whatever ammo you used to kill them (and if you use a knife, then the penalty appears to be none).

As you progress through the game, you’ll encounter a variety of enemies. There are armored enemies, axe wielding zombies, fireball launching monsters, and acid spitting monsters. Most of these enemies have a ranged attack, however, there are other enemies of note as well. These enemies include small insects, water-dwelling leeches, and, making a return for this game, disembodied hands (that, yes, finger you sometimes too). What these three enemies have in common is that they latch onto your head and causes you to take damage. It seems that if you run around hammering the fire and open button, they’ll eventually fall off.

Helping you along the way is an assortment of items. One of the most common items are the life essence items. These items are dropped by both civilians and enemies alike. If you pick one up, you’ll recover some health all the way up to 200. These items can also be found in breakable items. The not-so-common health pickup, though, is the life seed. This restores 100 health all the way up to 300.

Also along the way are ward’s. These items act as armor which reduces the amount of health taken away when you take damage. There’s the standard ward that can be picked up from breakables, randomly lying around, or even from the occasional enemy. These items fill your armor up to 100. A less common item is the necroward which recovers 100 armor for a maximum of 200.

Also helping you are the many weapons found throughout the game. These weapons include the sub machine gun, the minigun, rail gun, voodoo doll (returning weapon), sniper rifle, and the assault rifle. Many of these weapons contain a secondary fire option. For instance, the assault rifle’s secondary weapon is the grenade launcher (ammo being the diebugdie bottles). There is one limitation to the weapons in this game: you can only carry so many weapons. The weapon limitation is actually quite generous. You have your knife as weapon “1”, while you have numbers “2” through to “0” for your remaining slots. If you run out of slots, a message will appear indicating as such. You have the option of dropping one weapon for another. You keep any additional ammo you find, though. One way of helping you organize these weapons is remembering that some weapons share the same kinds of ammo. If you drop one weapon that shares the same ammo as another weapon in your inventory, it cam be a good trade for a weapon that has its own ammo pool. Still, the decision of figuring out which weapons to keep isn’t always easy.

Accompanying these weapons, which are largely dropped by killed enemies, are ammo pickups. These replenish your ammo stock of certain weapons. Pretty straight forward.

There are also inventory items you can pick up. This includes the medical kit (restores up to 100 health), flashlight (creates a spotlight for light, but has limited battery life), and various explosives you can set. They are all found in the inventory system of the game.

To add to this are a small set of special items you can pick up. These items are Willpower (reduces the damage you can take from enemy fire), Stealth (cloaks you, though doesn’t make you completely invisible), and Anger which gives you triple damage. These items only last for so long, so it can help to strategically pick them up as the situation seems to dictate.

Finally, there are a small number of keys. They are either key cards or physical keys. Either way, you need them to unlock mission critical doors. To add to this are both switches and buttons spread throughout the game. Sometimes, these switches are essential for your progress while other switches don’t appear to do much of anything.

This game is surprisingly big. It features 33 levels spread over 4 chapters. A bulk of the levels reside in the first 3 chapters while only 3 levels make up the last chapter. The levels themselves have a range in size. Sometimes, you may only spend barely a minute in a level before going on to the next area. Other times, you may find yourself spending several hours in a single levels.

Sometimes, you’ll have to blow something up in order to progress through the game. This can range from a simple desk to a hanging fire extinguisher that creates a hole in the wall. Either way, there are small things that really helps keep the gameplay interesting.

The dialogue, however little there is, does give a sense of lighthearted humor throughout. Some of the characters have a rather cartoonish sound to their voices. This is probably one of the few parts that isn’t rather gory and dark throughout the game.

One final thing of note is the many breakables found throughout the game. These can range from boxes and crates to desks and cabinets. Smashing breakables often reveals various goodies that can significantly help you. This is where the knife comes into use outside of a last-ditch effort to protect yourself. To conserve ammo, it’s possible to destroy most breakables with a knife. Just be wary of the ones that can explode in your face, though.

One thing I liked about this game is the fact that this game shows that you can have a large game that isn’t boring. While it isn’t the largest game I’ve ever played, I didn’t find myself wondering when this game would ever end very often at all. The puzzles and cut scenes, combined with the different environments, helped keep this game interesting. Chapter 2 was probably the chapter that was the most boring with a lack of cutscenes, but beyond that, I have little to complain about as far as content is concerned.

One thing I will complain about in this game was the random crashing. Mercifully, you can save anywhere you like, but the random crashing was the one thing that made this game annoying. Not sure if the stability issues revolve around having a new computer or what, though fiddling with the graphics seemed to help a little.

The AI of civilians left a lot to be desired. The constant running into walls or obstacles made the game look a little silly at times, but this, to me, was a minor thing since the civilians don’t appear that often in the grand scheme of things.

The occasional glitches did make gameplay a little annoying. One glitch was one of the bosses falling through the floor before you get a chance to kill him. This ensures that you have to either restart the level or use a cheat code to access the next area or face being permanently stuck somewhere. There was also the occasional glitches with doors where you can’t open them no matter what. In one area, I found myself entering a room with a second door. When the first door closed behind, I was stuck in the room because the second door was locked and the first door wouldn’t open. A second floor elevator was another glitchy door towards the end of the game. As a result, using the mpclip cheat ended up being essential for me to continue on in the game even though I never missed a key.

Overall, I thought that, in spite of the glitches and stability issues, the game still had a lot going for it. In fact, I wondered why in all the gaming conversations I had, this game never came up. After some research, I realized that this game entered an extremely crowded field at the time. With games like Half-Life, Mario Party, Resident Evil, Gran Turismo, Star Craft, Turok 2 – Seeds of Evil, Might and Magic 6 – Mandate of Heaven, and Banjo Kazooie all being released at around this time, it’s not that hard to realize that even a great game can have difficulty standing out in a rather big crowd. If it weren’t for the stiff competition, I wouldn’t at all be surprised if a 3rd game in the series actually did come out. As it stands now, all I can see is a great game that happened to be worked off the radar of most gamers who were otherwise occupied with their own games of choice at the time. Regardless, I had a great time with this particular game.

Graphically, I thought this game was pretty good. The random falling of the various particles such as boards and pipes were what really made this game work. The large number of environments you go through also made this game a graphical success. The shaking from the blasts, the fireball explosions, and energy effects also helped a lot. Overall, this is a great example of what graphics can be pulled off on the PC back in the late 90’s.

The audio was also pretty good. The music added a lot to the ambiance while the menu music worked quite well. The folly sounds such as the humming of machinery, the buzzing of electricity, and the wind all worked well. Caleb’s one-liners also added a nice amount of personality of this game. So, pretty solid here.

Overall, this game is definitely worth looking into – especially if you are a fan of FPS games. While the instability issues played the biggest spoiler of this game (accompanied by some glitches and strange AI on the part of the civilians), this game has plenty of positives to speak of. The large arsenal of items, the large amount of gameplay, the many enemies, and environments all made for a pretty good game. The cutscenes, puzzles, and effects also worked in this games favor. Certainly a game worthy of attention.

Overall
Furthest point in game: Beat the game on genocide. Toyed around a little with the other difficulties as well, but didn’t get very far after having to deal with more stability issues.